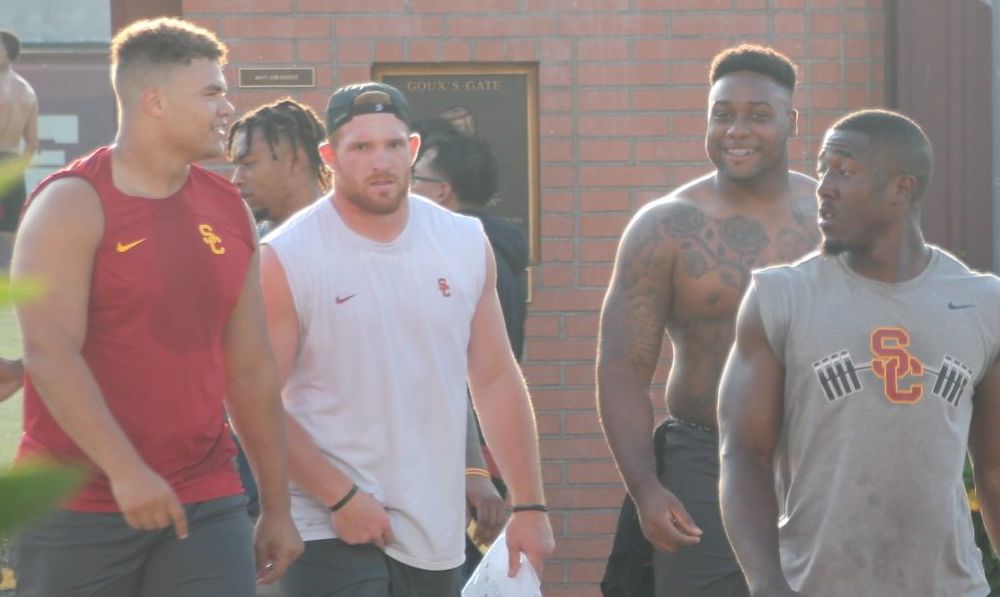 I have a few Qs…
1. Between Matt Barkley and JT, who would you play as a Freshman?
2. Do you think Matt should have re-classified back in 2008? He would have 1 year to learn behind Mark.
3. Whats the scoop on Wole?
4. Do you see Trevon Sidney getting ahead of Velus in the slot or would both he and Velus have roles to play given ASBs presence?

1. That’s a tough one since both guys were/are ready. Barkley has the benefit of having gone on the road for a big game against Ohio State and coming away with the victory, and there is a lot of speculation that JT could end up having a similar opportunity if he wins the job by going to Stanford and Texas for big road tests.
2. In hindsight, Matt had a very good group of receivers in his junior year at Mater Dei that helped him have so much success, and in that regard perhaps it could have made sense. But the recruiting world was very different even just 10 years ago and it was enough of a big deal for him to enroll early to be here for spring as a mid-year enrollee, I don’t ever remember the possibility of reclassifying ever coming up.
3. Wole has not taken part in any of the PRP’s so far as he continues to rehab from his hip injury. I haven’t heard any talk of him getting #55, or of a decision having been made for him to redshirt this year (https://wearesc.com/forum/index.php?threads/meet-the-new-55.52724/#post-736853)
4. Right now the answer would be no and that’s primarily because we haven’t seen Trevon healthy for an extended period in order to make a real run at more playing time. I do think Amon-Ra will emerge at the front of the slot receiver depth chart sooner rather than later, with Velus having a role as a deep threat and occasional sweep.

Is a way too early Garry P projected depth chart out of the question?

I will post something on Monday to reflect what we’ve seen so far in the PRP’s.

I was reading the Recruiting update where reference is made to the possibility of Michael Pittman leaving after next season. I agree, unfortunately, that is a legit possibility. But unless he just has a remarkable (Keyshawn Johnson) kind of season, I find it unfortunate if it plays out that way. It would seem like his college career/experience is a drop in the bucket, almost an afterthought. Certainly that was not the case for Robert Woods, or Marquise Lee and others. Interested in your opinion on this.

I think that’s a reality sometimes when a player leaves after his junior year. One of the best recent examples I can remember was Tyron Smith, he wasn’t a dominant lineman early in his SC career but by the end of his junior year he was well on his way and then he declared for the draft and now is one of the best in the league. With Pittman, if he has a really good junior year and is considering the draft I would talk to him about coming back and potentially getting some reps on both sides of the ball as a senior. He would make a really good OLB and from what I’m told it’s something that would interest him.

If JT should win the starting spot at QB, do either Fink or Sears have the ability to make move to receiver or other spot on the team?

Matt Fink had one catch in HS but I do think his athletic skills would translate to at least give a look at receiver. Jack Sears had 12 catches as a sophomore with Sam Darnold at QB.

With a new starting QB running the offense, do you think the OL will be using more power blocking and less finesse blocking?

I think that is one of the biggest questions for the offense is the possible tweak in scheme to run more power football, to rely on the ground game and offensive line more (especially with a defense that is supposed to be pretty good). We saw glimpses in spring but we really don’t know what the reality will be until we line up and see the offense in games.

So they again skipped the PRP on Tuesday. What is the story on the PRPs, is it just isolated circumstances, or is there something more to these missed PRPs?

The Tuesday session was moved to Wednesday. The only one that was missed was last Friday when Helton surprised the players with a team trip to the beach for a BBQ and volleyball competition.

Enough about Daniels kid. We all know Jack Sears = Future.

Hows my boy Jack doing in the PRPs and what are the chances he beats out Fink and holds off the Freshmen sensation for the season opener?

PS — What does the ‘JT’ stand for? Seriously, I can’t find it anywhere.

The best chance Jack has of moving ahead of Fink or holding off JT is to prove himself during scrimmages because I think that’s when he’s at his best. He’s just one of those guys who knows how to play when the lights come on. Right now though I would say he’s in a real battle to accomplish either of those goals.

Based on current info, how will this year’s defense stack up vs. last year’s? What are the main differences as you see them?

I’m very optimistic for the defense to be improved over last year. First of all there is a lot of senior leadership with guys who have been in Clancy’s system for three years now, guys like Cam Smith, Porter Gustin, Iman Marshall, Marvell Tell and Ajene Harris. I think we will also be stronger in the secondary and at nose tackle, which makes us strong up the middle with Pili, Smith and Tell.

Aside from OL Jason Rodriguez which current 2019 verbal commit are you most excited about?

I’m anxious to see more from Stanley Taufoou. He’s a big kid who seems to have good instincts and is physical when it comes to contact. I don’t know if he’s an inside linebacker or someone who will play on the edge, and that’s not something we have to worry about right now. I just like the thought of adding more thumpers to the linebacker group.

Garry, Can you explain the “behind the scenes” machinations regarding the scholarship offers and verbals. Obviously, there is a pecking order in terms of position needs and potential players. We offer probably ten times the number of scholarships we have to give. What happens if 25 “two-stars” accept the offers before the 25 “five-stars” do. How do the coaches manage the offers, expectations, and acceptances?

I think so much of the current way of making offers depends upon communication with the coaches clearly laying out what is being offered to the recruit. We’ve seen Helton operate this way in his time as a head coach and there have been situations when a verbaled player has been told there is no longer room, and yet we’ve never heard a recruit publicly complain about being misled or treated unfairly. I talked with the parent of one recruit this year who said “Helton kept his word throughout the entire process and he lived up to everything he told my son. As a parent, that’s all I can ask for”.