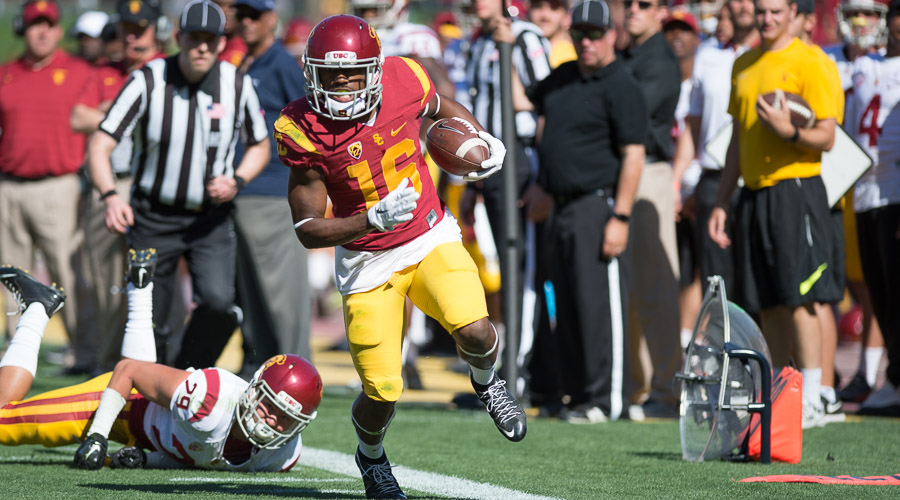 In this edition of the mailbag we talk a potential trap game for 2017, OL recruiting, a role for Dominic Davis, opportunities for Sam Darnold to improve, and more:

I keep finding my glance coming back to Friday Sept 29 on the calendar. I’m hearing a lot of mixed signals about the Cougars. If we can beat Stanford and Texas and are undefeated headed to the Palouse — is this a trap game?

It’s being talked about so much as a potential trap game that it certainly won’t sneak up on anybody but it does have a lot of the elements of a classic trap game. First of all it will be the first trip out of the state for the Trojans in the 2017 season, and it’s a long one to Pullman. On a Friday night. Football teams like their routine and a Friday game changes things just enough during the week to pay attention to. On top of that you have Mike Leach as the coach of the Cougars so you never know what he has planned, and he’s got a real good senior quarterback to work with in Luke Falk. I still think the Trojans have more than enough to come away with the win, I’ll just be glad when this one is over.

Hey Garry, I know that you attend a lot of local camps and get a good feel for local football talent. So, you might have an idea to my question. Here it is: There always seems to be quite a few high school kids each year that did not go camping that end up at schools like Arizona, Arizona St, Utah, Washington St, Cal, etc that are very talented athletes. Some of which could have excelled even at the SC’s, Stanfords, Oregon’s and Washington type programs. Are these the athletes that upper tier programs miss out on due to their not attending camps or are they kids that somehow slipped through the cracks and are just recruiting misses?

If a kid is Pac-12 level it’s probably not going to be a case of missing a camp or two that causes him not to get an SC or Stanford offer. There is so much information out there, so many opportunities for coaches to learn about kids, that you really don’t have too many kids slipping through the cracks like that these days. It’s also a reality that the Trojans can only take so many kids, so there will always be some really good athletes who end up at the Arizona States and Utahs of the world simply because the USC coaches picked other players ahead of them.

I think it’s pretty safe to say that we’ve all fallen in love with the QB play of Sam Darnold. His combination of fight, skills, and vision are amazing. Still, he is just a youngster and there is room for improvement. What areas of quarterbacking do you think the coaches would like him to improve most?

It’s a very interesting question and one that Helton addressed a few times in spring. There is definitely a ying and a yang to it, Helton said on one hand there are some things to improve on and clean up but you also don’t want to mess too much with the creativity Sam brings because that’s one of the things that makes him unique. For instance, they are working a little with him on mechanics, including work with Jordan Palmer (Carson’s brother), on things like keeping shoulders and feet square before making a throw, while also realizing Sam is often at his best when improvising. Helton did say Sam can always work on his decision making, his knowledge of down-and-distance, what Helton calls being a “situational master”. He said there were probably only a handful of plays last year that Sam would take back but he can always work on that. Then there are other things like generally getting stronger and faster, and being a more vocal leader, although Helton says Sam is the best one-on-one leader he’s ever been around.

While I’m a little concerned with the inexperience on our OL, I’m very optimistic regarding our defensive depth & experience. I think we could see the best Trojan defense this season since the Carroll team of 2008. Green, Gustin, Nwosu, Smith, Marshall, Tell, & Hawkins should all be among the top players at their positions in the conference, & John Houston, Jack Jones, Christian Rector, Wole Betiku, Ajene Harris, & Connor Murphy should all be valuable contributors as well. Mix in the talented freshmen & we’re looking good depth wise. And if Kenny Bigelow comes back & plays well that would be a huge bonus. Agree?

Yes, I agree. And I’m anxious to see what Clancy can do in his second year of working with these players, we didn’t get a chance to see that the last time he was here. So much of what Clancy does is based upon his knowledge of what his players can do and I think that’s one of the areas where we should really see the defense grow this season. We certainly saw it in spring where the defense was playing a lot faster and the players were crediting a lot of it to the increased comfort level between players and coaches.

Speaking of the OL, just how many of the prospected starters will be ready for Fall camp physically able to play?

Nico should be ready to go, he was able to take part in the final week or so of spring and with the rest his back should get over summer it should allow him to be in the line-up right away in camp. I don’t know for sure on Toa or Viane in terms of which is more likely to be ready. Toa didn’t appear to have any lingering issues with his knee in spring and it will be almost a full year since the injury by the time camp starts. I’m guessing the coaches will ease him back into any drills just to be cautious but I’m optimistic on him. With Viane, it sounded like the rehab time from his surgery would put him coming back right around the start of camp, so we’ll see if that is delayed or not. Again, with a multi-year starter there is no need to rush him back for camp.

We’ve seen an amazing influx of top tier Polynesian talent recently. I’ve seen some credit go to Stevie T., Johnny Nansen, and/or Helton. What’s your opinion on how all this has happened?

I think the SC football program has long had a strong tradition of Polynesian players but it does seem like that spotlight has gone up a notch lately. I would put the trio of defensive line commits in this last class as a key turning point when people started to say “there is something going on at SC with the Polynesians”. In that regard you can certainly say Stevie T had an impact with his success, and I don’t think you can understate Johnny Nansen’s role with the results he’s seen on the recruiting trail. But one thing we’ve definitely heard from multiple Polynesian recruits and their families, both in the last class and this class, is the message from Clay Helton of “Faith, Family, Football” and how that resonates with their beliefs.

Will the staff ever figure out how to utilize Dominic Davis? I think the kid could fill that Adoree role well and would be a stud on kick returns.

That’s a tough one. It opened a lot of eyes this week when Dominic (photo above) was named as one of the top 5 fastest players in college football, and if you want a singular example of that speed, look no further than his 84-yard run against Arizona last year.  But to be honest, I don’t know where you find him meaningful touches in this crowded backfield. I love his speed, and I actually thought there would be more of a specific role for him in the offense, but I can’t fault the coaches for the guys they have ahead of him. The return game may very well be his best chance to contribute. One variable is a new position coach in Deland McCullough, there are plenty of examples of players who find a role when a new set of eyes is involved (see Buck Allen).

When I read your recruiting summary I was surprised and a bit concerned about your projection of only 2 OL in the 2018 class, one being Brown who doesn’t even have an offer yet. I know the Trojans landed 5 in the 2017 class which was a very good thing. If you look at the first six projected OL for the upcoming season – Chuma, Toa, Falah, Viane, Brown and Hemsley, only Hemsley is not an upper classman. There doesn’t seem to be a lot of high-end depth between these guys and the five true freshmen. Is this a fair assessment?

I think it behooves the Trojans to bring in a minimum of three in the 2018 class. But is it a fair read that there are not a lot of Wyatt Davis and Austin Jackson-level players out there this year? It sounds like Sewell is an absolute must get. Are the Trojans looking at 2019 as more of a “load-up” year?

Your comments on this would be appreciated. Thanks Garry.

I don’t think there is any set number yet, and the first line of that OL section said that it could be a flex position on numbers, as there could be three and if the right guys come I think you could spend a 4th as well. I certainly would love to load up on as many as possible while the Trojans have so much recruiting momentum but you have to measure that against the talent available in the class and so far it doesn’t look like a great year for OL depth. I agree on Sewell, he’s become as much of a priority as any OL I’ve seen. With Brown, it will be interesting to watch, I think his body frame is maturing and I’m anxious to see how that starts to impact his play on the field in the fall.