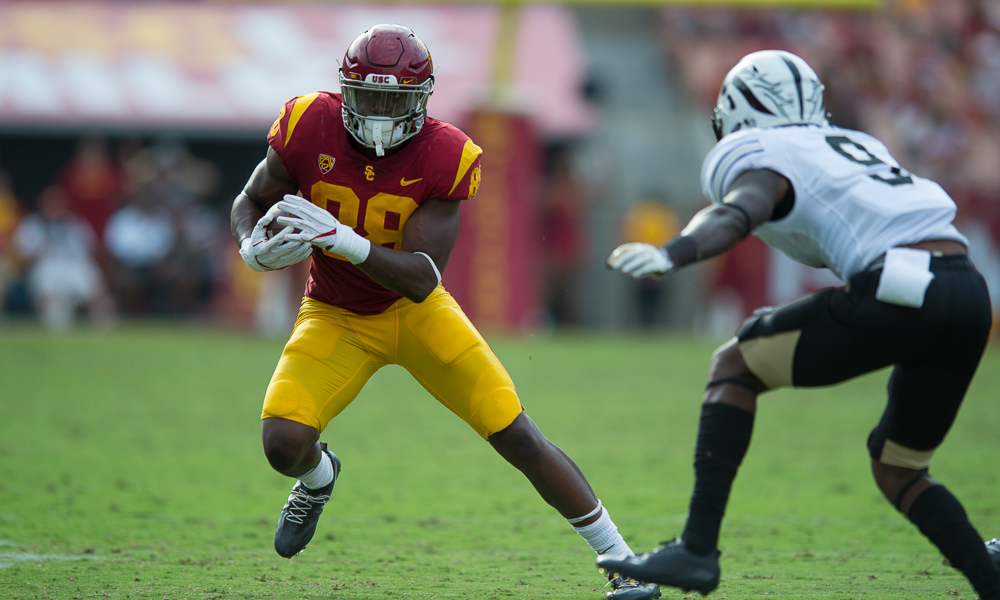 Spring ball kicks off on Wednesday afternoon and readers this week had questions ranging from USC’s reenergized recruiting, to injury updates on players, to potential kick and punt returners, and more.

Q: Can you give any insight on what happened to TE Falo? At one point it looked like he was headed for all-conference honors and maybe an NFL career. Last year he hardly played. I know he had a few injuries, but even when healthy he wasn’t playing. In the past he’s shown good speed for a TE and very good catching skills, which seems perfect for the Air Raid. Thanks

A: Josh has had a few nagging injuries and when healthy, he just hasn’t been consistent enough to see the field on a consistent basis. I was actually impressed with his blocking ability at times during last year’s fall camp, so that’s a nice aspect of his game that has improved. Ultimately, I don’t think there’s anything more to the tight end usage last year than what the coaches are saying. They felt the offense worked best when they had four wide receivers on the field, and that meant giving Drake London extended time over a tight end.

Q: Naivar said that he prefers to have 5 Marvell Tell’s back in the secondary. He like long athletes who love to hit. I know we had a main starting group of DBs last year. Given this preference now from Naivar, who might we see in the starting rotation and which guys do you think Naivar would lean to as his go-to guys (most like Marvell Tell)?

A: If he’s looking at length, which is what he specifically spoke about with Tell, Kaulana Makaula becomes an interesting prospect out of the young guys. Truthfully, nobody is jumping Talanoa Hufanga and Isaiah Pola-Mao in the starting lineup. I’m interested to see how that spot shakes out because, I feel like Naivar was also referring to a very experienced Marvell Tell, who could be asked to do a lot of different things on the field, so it’s also finding a match mentally as well as physically. I think Briton Allen has a bright future back there, but I’d be surprised if there isn’t a heavy reliance on those two starters and Chase Williams as the veteran guys. But that’s a spot that’s definitely worth monitoring this spring.

Q: Do you have an update on Bru McCoy?

A: The USC official site has made a point to include McCoy in a lot of the videos and photos from the winter conditioning session, and head coach Clay Helton mentioned him specifically as someone he wants to watch this spring. Kedon Slovis will obviously be the focal point as the USC starting quarterback, but I don’t know if there will be a player watched more on Wednesday than McCoy.

Q: What is the vibe like around HH now? Did cleaning out some of the dead wood like Lopes and Orr improve the attitudes/interaction between the remaining employees? How are the new coaches fitting in personality-wise with the rest of the athletic staff?

A: All we’ve heard about these new coaches is that they’ve really taken the lead in injecting a new energy and vibe into the program and whether it’s the players or other coaches, people are wanting to follow.

Q: What do you think about a possible future move to the Big 12 for USC? Also who else makes sense to go with them?

A: I don’t like the idea of a move to the Big 12, but I like it more than staying on board a sinking Pac-12 if changes aren’t made for the better in this conference. UCLA is always going to make sense as a moving buddy for USC if a different conference comes calling.

Q: What do you think of the new XFL kickoff rules? I can not say I have watched much XFL, but it does seem to increase player safety while reemphasizing an exciting part of the game. Do you think college football could adopt new rules along similar lines? It is difficult to imagine 55-24 without AD taking the second half kickoff to the house.

A: Ultimately, I don’t think it needs to be changed from where it is now. But I do think the XFL kickoff is great. It still allows for the opportunity of a big play while taking out a lot of the injury risk of kickoffs. It looks a little strange the first time you see it, but I think it’s a better option that potentially eliminating the kickoff altogether.

Q: Do you know if Imatorbhebhe is now officially cleared for this sixth year?

A: Yes, according to a USC spokesman, Imatorbhebhe has been granted his sixth year of eligibility.

Q: Erik, it’s great to see the coaches out recruiting and the early offers and going after the best players again!

What changed with Helton’s philosophy and attitude about recruiting? Is it a lasting change or a one time thing? Did Bohn light a fire under him? Helton finally realize his job was on the line? Is it more that the new coaches convinced Helton that recruiting is the lifeblood of the program and the best teams usually have the best players?

A: Both Donte Williams and Craig Naivar came out and said that recruiting is a 24-hour a day, 7-day a week, 365-day a year job. I don’t think that was happening from every member of the coaching staff in the past. Clearly, Helton is capable of closing when the table is set. Those were great recruiting classes he landed in 2017 and 2018. The monetary and personnel resources that athletic director Mike Bohn has brought to the program has resulted in an immediate boost with recruiting and the Trojans now have a staff that is united in how important recruiting is and how much time they’re willing to dedicate to it. There is also the support staff to make sure every recruit is getting enough communication to fill in any gaps that might occur.

Q: What’s the status with Solo and his health? Will he be ready to go in Spring and how much will he be able to do?

A: We’ve seen some short clips of Solo working out a bit this winter, which is more than we saw for most of last year. There is no injury note on his USC bio that recently posted, and more than a few players have notes there about potentially missing or being slowed during spring ball. Like Bru McCoy on offense, Solomon Tuliaupupu will be the defensive player with the most eyes on him when spring ball opens on Wednesday. And we’ll find out a lot more about his health then.

Q: With Spring Ball starting on Tuesday, I know we have been looking at trying to bring in a Grad Transfer at one of the Tackle spots but no new commits yet. If we’re unable to get a Grad Transfer to commit quickly, do you still see USC trying to bring in a new OT even if they would have missed practicing with the team during Spring Ball? Could a veteran Tackle come right in and play in the Fall without practicing with the team in Spring?

A: Definitely. This is exactly what happened with Drew Richmond last year. He took a visit to USC during spring ball and then announced his transfer in late-April, a few weeks after the Trojans had wrapped up spring ball. I don’t think this is an offense that a veteran grad transfer would struggle to pick up, so USC could look to add someone all the way into fall camp as long as the scholarship numbers work out.

Q: Greg Katz alluded to the possibility of Bohn fleshing out new hires as a way to counter not being able to hire Urban Meyer. Is it possible he told Helton this is the way to go to save his job? These defensives hires seems like it will energize the program and with a good season, recruiting will be back in a big way. All Helton has to do is let his assistants do the coaching as Coach J. Mckay and Coach P.C. did and concentrate on discipline and the finer points.

A: Bohn was clearly involved in the hiring process of the assistants, as all four thanked him for his part when they announced their moves. But all four were far more effusive in their praise for Helton and each stated that he was a huge reason as to why they took the job. I don’t think this year will be much different from Helton in how he manages his assistants. He let Harrell take over the offense last year and he was always hands off with Clancy Pendergast and the defense.

Q: What is the latest on Lichtenstein? You talk about a forgotten man!

A: Unfortunately, Jacob Lichtenstein has another injury note in his bio, as he underwent surgery for a sports hernia this past off-season. Luckily, it only says he could be slowed, rather than out entirely. But getting him back on the field in any way should be big for USC. He has that big body that should help the Trojans flip between the three and four-man fronts, and he definitely showed flashes when he was healthy during the 2018 season.

Q: What is the story with Chris Claiborne? Seemed like a no-brainer that SC would hire him. I know that Orlando is coaching the LBs, but Chris could be the day to day assistant working with them.

A: Lots of rumblings that Claiborne could be with USC soon. As soon as he stepped down from his head coaching job at Calabasas, it seemed like only a matter of time before he was involved in some way with the Trojans.

Q: Looking at our depth at WR and RB in the Spring, if there are no major injuries, can you see the coaches utilizing either or both Keenan Christon or Gary Bryant in a Specialist Returner role sort of like Devin Hester? While both young athletes are so dynamic, reps on the starting Offense could be limited for them and I see where either could carve out a huge role as a Return Specialist.

A: Christon won’t be with USC this spring, but he’s absolutely on the short list of potential kickoff returners. Gary Bryant should absolutely get a look as both a punt and kick returner as well. Both Tyler Vaughns and Amon-Ra St. Brown are back with punt return experience. Last fall, we saw Adonis Otey practice returns quite a bit. With special teams coach Sean Snyder here now, we’ll see what he wants in a returner. Kansas State had more than its share of dynamic return specialists under Snyder over the years, so he’s proven he knows how to produce big plays.