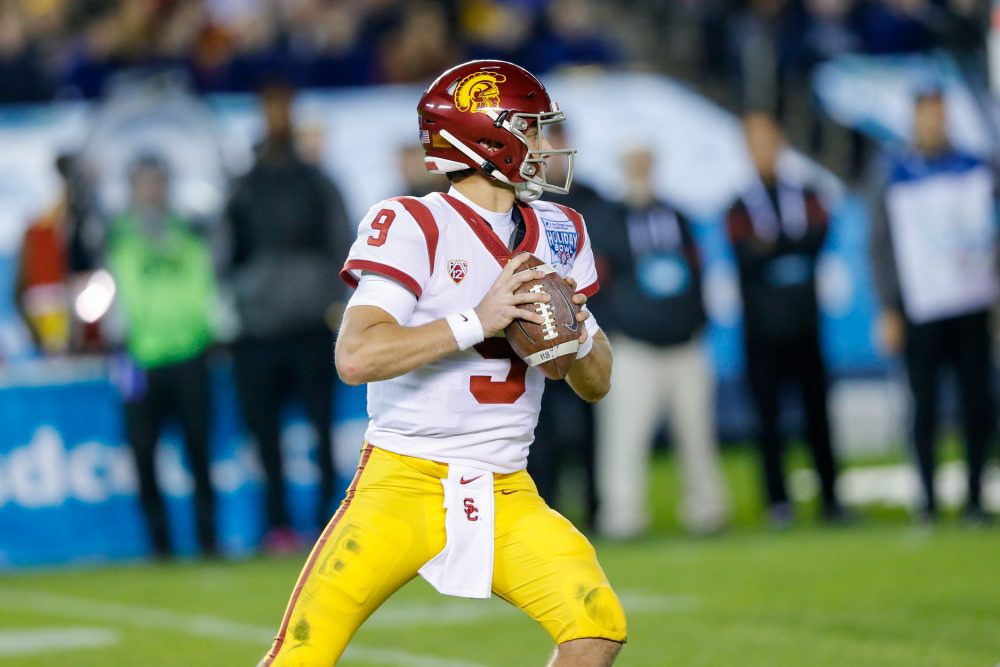 Following Wednesday’s signing day, readers had questions about USC recruiting and potentially looking into the transfer portal to add bodies, the potential 2020 and 2021 lineups, and USC’s status in the recruiting world.

Q: What is the latest info on Slovis? When will he begin to throw, and will he be ready for Spring ball?

A: The fact that it was just an elbow sprain Kedon Slovis suffered during the Holiday Bowl and not something that required surgery was really welcome news for the Trojans, who couldn’t afford anything that might require them to go through spring ball without Slovis or JT Daniels. With news of the sprain, there didn’t seem to be any worry about Slovis missing spring ball.

Q: The recent firing of defensive assistants indicates that Orlando has been given the power to assemble his own staff. Do you think this is something Helton agreed to in order to hire Orlando, or is it Bohn that is now micromanaging and calling the shots and giving Orlando that power. Either way I hope Orlando also gets to run practices the way he wants.

A: Orlando has definitely been allowed to assemble his own staff, and Helton insinuated as much during his Trojans Live appearance following signing day. I’m not sure when Orlando was given that power and who it came from, because I do know that in interviews with other candidates, Helton expressed his preference to keep the defensive assistants he had on staff. Clearly, something happened where either Orlando pushed through that or Helton was only suggesting that and not steadfast in that as a requirement. I’m certainly curious to see if practices look different under these new defensive coaches. Helton has been pretty set with the practice look during his time as head coach.

Q: When do you think Clay Or Bohn will make a formal announcement on the recruiting class and the state of the football program?

A: I think Helton’s appearance on that aforementioned Trojans Live served as the formal announcement. USC didn’t hold a press conference on signing day (and I can understand that, given that just one player was signed), but it still felt very odd.

Q: Tayler Katoa will return to USC after his two year mission. Can you do a quick recap of who he is, what to expect of him with two years away from football, and what impact he’ll have this season?

A: Katoa didn’t get a ton of time on the practice field at USC as he tore a knee ligament during his first spring ball in 2017. He’s a really instinctive defender who played quarterback and linebacker in high school and in the limited time he was on the field, was clearly set to outplay his recruiting ranking. He’s a good-sized player, at 6-2, 230 pounds as a true freshman. I think he’ll have the ability to play a few different linebacker spots in Orlando’s defense. It’s always a question as to what kind of shape players show up in after taking their mission, but hopefully Katoa will have some time during summer with the team to be ready to go for fall. If he’s healthy and in shape, I don’t see any reason why he wouldn’t push for some playing time, even given the linebacker depth chart with a lot of experience and bodies returning.

Q: Erik, obviously with this feeble effort on NSD, the Trojans are going to need to come up with a couple good players via the portal. What are your thoughts on who (or what positions) SC might go after?

Q: Any OT that SC has a shot at in portal?

Q: There is room for one scholarship player. Does the staff stay with that or goes for a transfer?

A: I lumped these three questions together because they all hit at the same idea.

Clay Helton said following signing day that USC kept two open scholarship spots so they can go after players in the portal. But it seems as though the Trojans will need to still do some roster maneuvering to make that happen. Obviously Helton has a better understand of what his roster looks like, but we can take a look at the most up to date roster and see the scholarship players officially listed. And with the addition of Jack Yary–bringing USC’s 2020 recruiting class to 13 players–USC currently sits at 84 scholarship players.

This includes the return of Daniel Imatorbhebhe, who would need to be cleared by the NCAA for a sixth season. It does not include Tayler Katoa, who would need to be counted in the total scholarship count if added back to the roster following his mission. So if USC is going to add players via the portal, it would seemingly need to hope players currently on the roster enter their names onto the transfer portal or leave the team via another route. USC is set to open fall camp with three kickers on scholarship (McGrath, Brown, Lewis) and a couple of juniors and seniors who don’t stand to see much time this fall.

There aren’t a lot of no-brainer offensive linemen left in the portal, like Drew Richmond last year. The top-ranked guys as preps are either already committed to other programs or play guard, whereas USC could certainly use a tackle more than a guard.

I could also see USC going after a veteran defensive back–either a safety to push Isaiah Pola-Mao or provide depth there, or a corner to push the still-developing young players there. Texas has several defenders in the transfer portal, including defensive linemen. It would be at least worth a discussion to bring someone in with experience playing in Orlando’s system to help with the transition.

How many returning starters will we have for the upcoming season?

On that same vein, how many will leave after 2020?

A: USC returns 17 of 22 offensive and defensive starters for the 2020 season.

Clearly, there is plenty of experience behind those starters listed (Stephen Carr at running back, Drake London at wide receiver, Brandon Pili at tackle, Chris Steele at cornerback), but that’s an idea of what the coaches have to work with as a depth chart following the Holiday Bowl. We could see some shifting along the offensive line, with McKenzie flexing out to one of the tackle spots and someone else taking over at right guard.

After the 2020 season, there will likely be some more changes to the starters, but it’ll only be huge turnover if a bunch of juniors declare.

On offense, running backs Vavae Malepeai and Stephen Carr and wide receiver Tyler Vaughns will be gone. But the entire offensive line could return. Of course, left guard Alijah Vera-Tucker and receiver Amon-Ra St. Brown are good bets to leave early. Defensively, the Trojans will lose middle linebacker Jordan Iosefa, but again, nearly every player of note could return. Whether guys like Jay Tufele, Marlon Tuipulotu, Palaie Gaoteote, Olaijah Griffin and Talanoa Hufanga choose to come back will say a lot about the kind of rebuilding year it could be for the defense.

Q: Conjecture time, Erik. Although Helton has a contract moving forward, it is clear to me that he is on a one year leash. Why else would coordinators be given three year contracts and no mention that the AD is committed to keep Helton for the same amount of time? There is a lot of “quiet” from the AD – what do you think is going on?

A: I don’t think anybody truly believes that Mike Bohn never had a thought about replacing Clay Helton. At this point, I don’t blame Bohn for keeping quiet. He isn’t going to be able to say anything to appease the vocal majority of the USC fanbase that wanted to see a coaching change.

Q: You mentioned as one possible reason (and IMO the most likely reason) that coaching instability was an issue in recruiting this year. Kids didn’t want to come to USC because of the Helton turmoil.
Now that we have time to step back and look at things how did this issue get planted in their heads? Who was most guilty of this? other coaches planting a bug in their ear or the social media?

Social media has seemed to chill out for the time being so maybe this is the chance to be objective about it.

A: Recruits know what is going on. They know USC hasn’t played for a Pac-12 championship in two years. They know USC has been blown out in several games over the past few years. They know USC has had four first-round NFL picks over the last seven years (Clemson has had five in three years. Alabama has had seven in two years). It has gotten to the point where going to USC isn’t the surest route to playing for national championships and being taken high in the NFL Draft, and those are two of the most important things many prospects are looking for during the recruiting process.

The majority of this is coming from coaches at other programs and players who have left Los Angeles to go to other schools. USC is still going to be the clear choice for certain local prospects, but there just isn’t an overwhelming feeling of it being a race for a spot in the USC recruiting class like it was when things were rolling under Pete Carroll and even when recruiting was still at a high under Kiffin, Sarkisian, and even the first years of Helton.

Q: When is helton going name a DL and DB coach? Spring practice is right around the corner.

A: Helton said he hopes to have the process wrapped up inside of two weeks, and specifically said the cornerbacks coach was on the verge of being finalized. John David Baker wasn’t a name that was going to move the needle much in terms of making a national impact, but he is close with Graham Harrell, so it makes sense. The other three coaching additions (Orlando and Naivar announced, and Snyder reported) have to be seen as really positive additions. Sure, there are some holes you can point to, but considering where USC finds itself right now in terms of national perception, I’m pretty happy with the names added so far. We’ll see if that continues with the final two additions, and then there is a graduate assistant spot on defense that can still be filled as well.