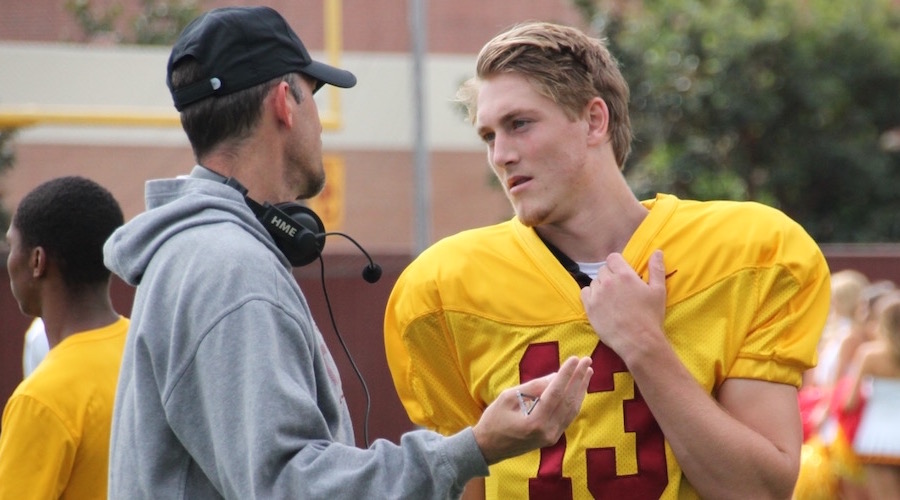 usc88
Lenny Vandermade is coming aboard as in a offensive quality control position.
Is that position allowed to teach hands on instruction?

No, quality control coaches are allowed to be part of all preparations, meetings, etc but not on-field instruction.

TrojanHorse
The Trojans seem to be averaging around the #15 slot in preseason polls. Will we finish above or below that number at season’s end?

I think that ranking, deservedly so, gives a lot of respect to Sam Darnold (and Ronald Jones to an extent) and what their losses might mean to the Trojans. Because really, if you look everywhere else in the starting line-up there is a very good case that this is a top 10 pre-season team, probably around #6-8. And that tells me they think the play of the QB will go a long way to determining if the Trojans climb that high (or higher), which I’m not going to disagree with, but I would also add the run game led by Carr and the OL coming together.

Bill Payne
Two questions:
1. so we have two more scholarships me thinks:do they roll over to next year, or go to a walk on (as an incentive)… as anyone still on the board can’t be Trojan quality
2. Didn’t I see that the NCAA offered $14,000,000 to our dismissed coach, and he refused it (thinking if it was that “easy” to get that much, there must be more)!

1) There isn’t a lot of clarity on the final spots because there are still players who would have to depart the roster in order to fit all the new signees. Helton said he knows how he thinks things will play out and that he will let us know at the appropriate time. 2) There was a report a while back from the Daily News that said McNair had been offered $10 million but never any confirmation or other reports on the matter. If true, I think it gives a pretty clear example that McNair will see this through to court, and I really hope that happens.

motovich
Beyond the 1st team offensive linemen, our OL depth looks unproven at best and more likely pretty questionable. Both our freshman centers were very highly ranked recruits (#1 in country by some recruiting services). Has there been any thought to switch one of them to OG or OT rather than having one of them sitting as a reserve C?

It’s possible that one, or both, could get a look at guard but they both have such natural frames for the center spot.

gepetohong
Garry, with the possible “unplanned” exit of Jody Lewis, IF everyone who Clay said he accounted for leaving still leaves, that would leave an extra spot open on the 85 limit. With that extra space, what is your opinion of what we do with it? Convince one player that planned to leave to stay, or give that scholarship to JJ3? Or recruit another player?

Helton has always talked about the importance of recruiting your veteran players back on the roster, so if you go by that thought he might try to talk to one of the planned departures about returning. If not, I’m biased on this one, but I would love to see J3 get it.

Rainman44
The QB battle between Fink and Sears is very compelling. What sets Fink apart? What sets Sears apart? Do you have any reservations about either (or said another way, are you looking for either one to prove something beyond the obvious)?

Matt Fink is a very good athlete playing quarterback. We all saw his explosive touchdown run, that’s something unique he can bring to the table. He’s very competitive, intense and in his time at USC he’s grown in his comfort level for the position. The biggest thing I would want to see from him is the same thing I’ve always said about Matt, consistency in the passing game. He’s got a strong enough arm, I’ve just yet to see the consistency. Maybe now is his time. With Jack Sears, you’ve got a quarterback who happens to be a very good athlete. The thing that strikes me about Jack (photo above) is that nothing looks too big for him on a football field, he looks in control at all times. He is also a very good runner, and if I had to say anything I want to see from him it’s the deep ball.

For the most part I do think there is a blue-collar attitude of work (along with some discipline issues) but I think the bigger point you’re making is about style of offense, of physical domination, “power run-first football” as Helton said when he was first hired. I don’t think it’s something he’s completely delivered on yet, don’t get me wrong, his system has put up some big numbers and it’s won some big ballgames, but is it conducive to power run-first football? Probably not. It’s something that Lynn Swann has talked about with Clay, and it’s something that former players such as Ronnie Lott, Marcus Allen, Anthony Munoz, Riki Ellison and others talked about with Lynn in a suite at A&T Stadium during the Cotton Bowl. All of these Trojans are in support of Clay, but they were also there when USC couldn’t run the ball against Alabama either, or at Notre Dame this year. They aren’t used to seeing that from a USC team, and they want to make sure there is good dialogue on the topic as Helton continues as the head man. I do think this off-season will be interesting to see if we get more of the quarterback under center, or a fullback, and, of course, what happens with the offensive line (which includes the tight ends as blockers).

desertfoxx
Pure conjecture but if JT wins starting QB position most likely we lose one of our other QB’s.. are we recruiting anyone QB’s for 2019 class .. sorry I do not follow recruiting that closely

The Trojans recently offered Jayden Daniels of Cajon and I think he’s a real interesting prospect. He’s 6-3, 170 and ranked as the #5 dual threat QB after leading Cajon to a CIF-SS title and state title game appearance. Alabama and Georgia have also offered. He’s not a polished thrower of the football yet but with so many other dynamic skills you can certainly understand the potential. I would also keep an eye on Ryan Hilinski from Orange Lutheran. His family has been in the news lately for a sad reason but in recent weeks he has gone on a tear in terms of offers from schools like Georgia and Oregon, in addition to an earlier offer from Washington State, where brother Ty was scheduled to be the starter next season. So far no SC offer but with Ryan measuring in at 6-3, 218 and throwing for 3,749 yards and 33 TD’s last season, it’s easy to understand why the Trojans are taking a long look.

BigDaddy
Do you see a realistic chance of some sort of QB rotation at the beginning of the season? Maybe Fink and Sears end fall camp without separating themselves and are designated a sort of 1 and 1a or JT is coming on strong yet still new and gets eased into the starting job with a set number of downs?

I don’t think you can rule it out. Two years ago Helton gave all the reasons why he didn’t want to rotate quarterbacks, and then he went out and rotated quarterbacks. Sometimes the situation just dictates that you need to do it.

LDIABootney
What position(s) will most likely get the attention from the staff concerning 2019 recruiting?

Both sides of the line, and tight end. There were only two players taken on the line on each side of the ball and that is at least one player less than you ideally wanted to take. The good news is that it’s a strong year for linemen on the west coast and the Trojans have plenty of scholarships to work with. Don’t be surprised to see a tight end with bulk in the mix, Ethan Rae and Jude Wolfe are two local guys who each measure in the 6-5, 240 range.

scdg71
Hi Garry … hope you truly “got away from it” … to refresh!!! I don’t fully understand this statement … could you help?
“It stands to reason JT didn’t bypass his senior year with plans to redshirt so that would mean he’s been lead to believe the job will be open entering fall camp.”

Of course … he’ll get a chance for the starting job … But, I was thinkin that he probably would have been a redshirt possibility if he came in 2019. Now he gets that out of the way while he is in what would have been his senior year. Shows you what I knowl

I think it would be a natural progression of the depth chart for him to redshirt in 2018 and it may very well happen. I was simply referring to the job still being open when JT arrives for camp, which means that Helton would not have named a starter at the end of spring. I know there is a lot of debate on naming someone at the end of spring or not (I’m usually in favor of it) but in this case I can understand waiting until fall camp, especially if you told JT that would be the case. I also think it would benefit Fink and Sears, neither of whom have a lot of experience, to go about spring without the pressure of a looming starter announcement.

Cardinal&Gold
Garry,
I’m looking forward to watching the TE group this season. It seems like we have a nice mix of talented second year players and veterans that are on the verge of breaking out.
Question: Do you see T Martin using the TE group more in 2018?

Yes. I think the biggest reason the TE spot wasn’t used more last season was the absence of the Daniel Imatorbhebhe that we saw in 2016. I expected Daniel to be the #2 receiver last year behind Deontay if he was healthy, and it would have really opened things up for Darnold and the spacing among his receivers. We saw that impact toward the end of the season as he got a little healthier, he wasn’t 100% but the defenses adjusted to his presence. So let’s assume he is even healthier now, and he should have a more experienced Josh Falo to pair with as another weapon — I think we’re all excited to see what he can do. That’s a pretty explosive duo to throw out there. Add in a senior Tyler Petite, who did a credible job as a pass catcher early in the year with Daniel out, and I would hope/expect to see more from the position. And anything Erik Krommenhoek can contribute in the passing game is a bonus, his contributions need to be seen as a blocker too.

Gold Trojan
Who do we have that can dip their shoulder and provide that speed rush from the end position? Gustin is more of a power guy, and now that Uchena is gone, that is a missing component.

That has been the hope for Oluwole but it hasn’t translated yet. He’s got all the skills to play that kind of role. If not, I’m interested to see if someone like Iosefa or even a Levi Jones can get a look.