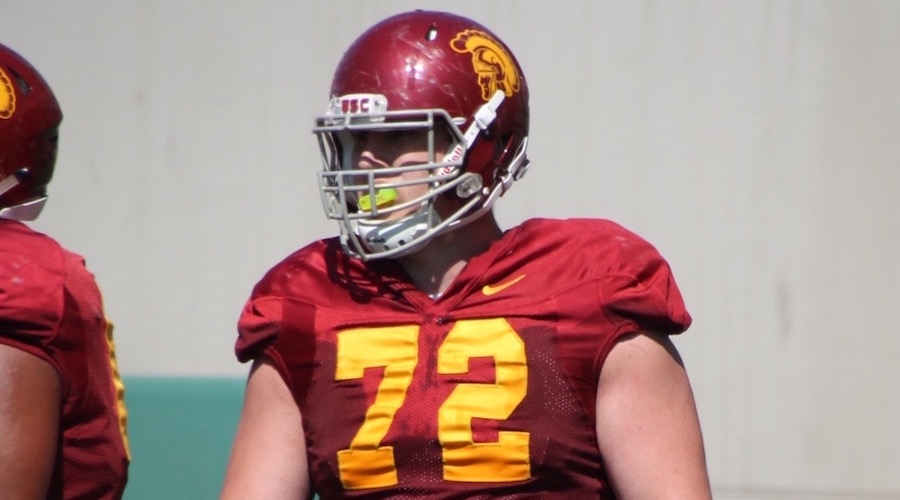 In this edition of the mailbag we talk USC offensive line development, scheduling in conference based on weather, the legacy of Dennis Smith, and more:

My multi-part question is re: the wide receivers. It seems a given (at his point) that Burnett and Pittman are the two front runners. At this point, who do you project as the third starter? Do you think Mitchell will see the field much? There is a lot of depth, but the group is young and lost a solid starter with great hands in Rogers and a star team leader in Juju. Should we assume that the WR unit will not be as good as last year’s?

I would definitely project Tyler Vaughns as the third starter coming out of spring. I thought Tyler and Pittman did a terrific job of consistently making plays during the spring drills and I would have named them my co-MVP’s. And, as you say, Burnett is the starter in the slot and I don’t see that changing even after Mitchell comes back. I do think Steven will have a role as a veteran in the slot rotation but Burnett is the guy at this point. In terms of the overall production from the group you are probably right, we aren’t likely to see the same level from the receivers as we saw last year but I don’t think it will be off by much. Helton said in spring that the offense will go as far as the young receivers go, so that shows what the coach thinks of how important they are to the overall success.

I’m wondering how you and your gang of experts see the season vs our schedule. I think the first 3 games will set the tone. In particular I’m wondering if you have any intel on how the Farmers will look. We should get by West Mich … and Texas … with Stanford being a biggee as always. How do you see ND and UCLA? THANKS MUCH … as always.

Here’s a story I did yesterday with some thoughts about the schedule. I don’t think there’s any question that Stanford game is a major test for the Trojans and I like the fact that it comes so early. The two-game stretch of Utah and Notre Dame is a real interesting one to me, and the fact that there is no bye week is something you need to factor in as well. The coaches are certainly paying a lot of attention to it.

Have you seen enough of TE Cary Angeline to project how he is used once his time comes (highly leveraged to the other extreme; what his strengths are and what kind of production can be expected)? My curiosity comes from seeing how the TE group is looking better than it has in some time, and just wondering where he fits in.

I’m pretty optimistic about Angeline based on what we’ve seen so far. We didn’t know a lot about him in high school as a Pennsylvania kid who didn’t do a lot of the camp circuits but when he showed up to summer workouts last fall the first thing that stood out to me was his frame. He’s 6-6, 230 but you can tell he’s got the kind of frame that should add weight well. Then I started to notice how well he caught the ball, and he was pretty fluid in his routes. This is a good athlete and he did well enough in practices that he was named the offensive service team player of the year in the fall. I don’t know how the playing time will shake out at TE this year but my guess is that Daniel Imatorbhebhe will be the starter with Tyler Petite and Cary battling for the next place in line.

Think the battle at the Coli against the Indians will be our big test. Coach Helton has to beat Shaw. Am I making too much of this?

No, I don’t think you are making too much of it. The fact is the match-up with Stanford has become an early season measuring stick in recent years and you can’t deny that the Cardinal have seen their share of success against the Trojans in that time. So if the Trojans want to prove that they are back as the kings of the conference this is simply a game they need to have. The players know it, the coaches know it, and Stanford knows it.

Does (and if not in your opinion should) the PAC-12 do a better job of considering geography when scheduling games? Nothing is perfect and elements are part of the game but heat stroke in Arizona during summer with full pads and simply traveling into the Rockies for a night game in November is something I would prefer to avoid if it was my kid. Thanks

In an ideal world I would love to see those elements taken into account more. The 2005 midday game at Arizona State stands out to me, I was on the field taking photos and it was as bad as any I can remember.

Who is your fav LB from the group available in 2018 – that you have evaluated?

Palaie Gaoteote. He’s on a different level. I really like Solomon Tuilaupupu as well but Palaie has a spark about his game that just separates him from others. I’ve never compared any high school player to Junior Seau but when you watch Palaie play that is exactly who he reminds you of.

In looking at the team so far, it looks like the skill positions on offense (even with the all the new faces at WR) are looking good and the defense in its second year under Clancy is going to be solid. I think that the development of the O-line (with 3 new starters) is going to be the key to the overall success of the team. My questions are: 1) who are your projected starters and how do you think they will do and 2) any o-line pleasant surprises, e.g. surprise starters or any back-ups who play well enough to earn some quality playing time?

I agree with you. The development of the o-line and how things come together with injuries is the biggest question mark to be answered in fall. For the starting line-up I will go Chuma Edoga at LT, Toa Lobendahn at LG, Nico Falah at center, Viane Talamaivao at RG and either Chris Brown or Roy Hemsley at RT. As for pleasant surprises, Andrew Vorhees (photo above) was well on his way in that department before getting hurt in spring. And Nathan Smith was showing something as well last fall before he got hurt. Either of those guys could be a surprise when they eventually come back.

Oregon under new coach Taggert: what’s the deal? What do you know about the guy? Their defense gave up 67 TD’s last year — that was the worst in the nation. Is Taggert a defensive guy? Does he have the horses to turn that program around?

Taggart made his coaching reputation on the offensive side of the ball but he brought in a solid defensive coach in Jim Leavitt, who saw success in recent years at Colorado. I’m taking Taggart very serious right now because he’s a high-energy guy who is connecting with recruits, and I don’t think it would take much success on the field for him to get the program turned around. I talked with the parent of one recruit who joined his son on an unofficial visit to Oregon this spring, I asked “what did you think of Taggart?” and his reply was “awesome, the rest of the conference better watch out”.

Dennis Smith was one of the best safety’s ever to play at USC, and one of the best to ever play the game at college and NFL levels. Is it just me, or is he a bit of a forgotten man in USC lore (as compared to the likes of Ronnie Lott and Marcus Allen who he seems to compare to favorably)? I googled his name and saw that he lives in Hollywood Hills with his wife, kids are grown up, he is in commercial real estate, and has a FB page. Interested in your take; he seems like a diamond in the legacy rough.

It says something about the power of USC football, right? You are absolutely correct with Smith’s legacy, it is special, but when grouped with the likes of Lott, Allen and others it gets a little lost in the shuffle. I will add Smith as a priority for a Where Are They Now feature, it would be great to catch up with him.

What can you tell us about Kyle Matthews, grandson, son and brother of the Clays?

Kyle was a safety at Westlake HS at a time of great leadership at the school. He walked-on at USC and saw limited action from 2000 to 2004. Kyle went into commercial real estate in the local area, and married a Trojan. And as an FYI his brother Brian, a former WeAreSC recruiting writer, is expecting twins with his wife Megan. Brian now lives in Cleveland and still follows Trojan recruiting with a passion.