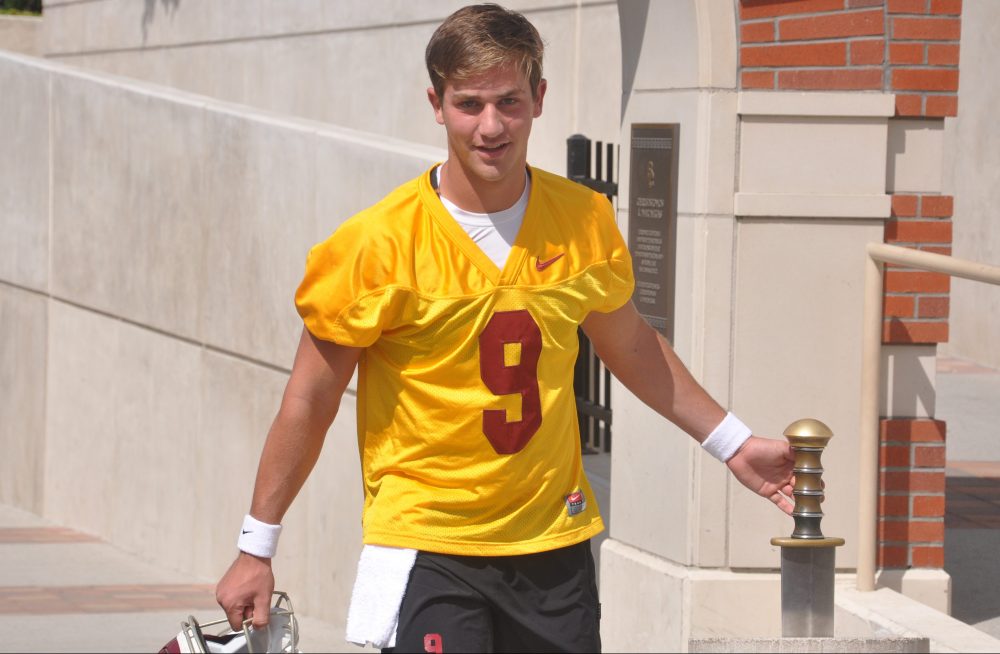 Readers this week had questions about quarterback Kedon Slovis, Clay Helton’s future, recruiting rankings compared to wins and losses, the potential of Urban Meyer at USC and the Trojans offensive game plan.

Q: Is Kedon practicing yet?

A: Slovis wore shoulder pads for Wednesday’s practice, but he is still not cleared for contact. The way Clay Helton and Graham Harrell have talked about him this week, my belief is that they certainly expect him to be ready to go for Notre Dame.

Q: A lot of fans would like to see the HC replaced. Do you think an AD should be hired first so can pick his own HC?

A: If a change is eventually made at head coach, I don’t believe that USC would need a permanent athletic director in place to initiate the first part of that process. I do believe that you would need one in place to make the new hire, or at least be far enough along in the discussion that they could sign off on a new coach, depending on the timing necessary. That would potentially be one of the biggest lures of the position.

But here’s something I recently heard.Number of 4 and 5 star players on roster:

A: It’s definitely something that jumps out. On one hand, I think it’s silly to judge fourth and fifth-year guys by what they were rated coming out of high school. Cal linebacker Evan Weaver was a three-star guy and the No. 914 overall prospect coming out of high school. That guy is the best linebacker in the Pac-12, and not acknowledging that players mature at different rates and a fifth-year former three star is probably going to be more beneficial to that year’s team than a true freshman four-star, seems like being a slave to numbers.

However, that being said, when you look at the top 10 in past recruiting rankings, it’s not like those programs are scattered all over the place when it comes to the top-25 polls of late. There is a clear collection of teams firmly inside the top 10, and then a couple scattered outliers. USC has been one of those outliers, and they need to quickly figure out how to get tucked closer to Clemson/Ohio State/Oklahoma/Alabama, where their recruiting rankings have been.

Q: USC has the most talent in the conference and has the 10th best record over the past two seasons.–SportsPac12. How do you respond to this article?

A: I think part of it can be explained away by saying that USC is the only program that has gone with a true freshman quarterback two years in a row. I also think a large part of it has to attributed to the fact that while there is talent, the Trojans simply aren’t doing enough to win. Whether it’s coaching, or discipline, or turnovers, or toughness, or whatever. You have games against Arizona State, Cal, UCLA and BYU over that span that clearly should have been USC wins. That would move the record to 12-5 and in a fourth-place tie with Oregon. Now, that still probably isn’t good enough for a lot of USC fans, but that’s a far cry from 8-9.

Q: Any rumors on how the search for a new AD is coming along? Thanks

Q: Erik, I’m ambivalent about hiring Urban Meyer, yes, he has his warts, but he does a great job of hiring assistant coaches, recruiting, developing players, etc.

Carol Folt has stood up to the NCAA so that alleviate’s most of my concerns.

Prefer hiring a coach like the next Urban Meyer, the Meyer who was at Utah, before he blew up big.

Who would you say is in that position now? The next great head coach at a lesser program?

Also, same question about the athletic director and who do you think should be considered for the job and who would they hire?

A: Matt Campbell at Iowa State is a coach that seems like he’ll be mentioned for a lot of bigger jobs over the coming years. He had three nine-win seasons at Toledo and has gone 8-5 in back-to-back years at Iowa State. I’d also put Josh Heupel at UCF in that category.

A couple other guys that deserve mention but won’t be candidates for USC would be Seth Littrell at North Texas, Nick Rolovic at Hawaii, Bryan Harsin at Boise State and Billy Napier at Louisiana.

As for athletic director, Northwestern’s Jim Phillips would be at the top of my list. I also think North Carolina’s Bubba Cunningham would be a solid choice, given his history with President Folt. And Washington State’s Patrick Chun would be very well-received as well.

A: Former players have definitely felt more and more squeezed out over the years, though there has been more of a recent push to get them back feeling included. Marcus Allen and Ronnie Lott are right there at the top of the list in terms of which players could be influential in a decision. I think they would be listed to if they wanted to voice an opinion, but I doubt a new athletic director would go directly to them in any sort of committee function to help him/her choose a coach, if that situation were to arise.

Q: LSU hired Joe Brady from the New Orleans Saints and in his first season they go from 69th in the nation Total Offense to #3 and Number 1 in scoring in 2019. Look at these insane offensive numbers. They are averaging almost 20 pt’s more than last season.

I have to be honest. I was expecting way more from Graham Harrell. Did they pay for Steak and get Meatloaf?

Q: “He that is good for making excuses is seldom good for anything else.” —Benjamin Franklin

“Ninety-nine percent of the failures come from people who have the habit of making excuses.” ―George Washington Carver

When you’re sitting in the post press conference after a loss what is the mood like from the media? Are they buying it? Can they “Smell what the Rock is Cookin”?

A: I think the media as a whole understands what Clay Helton is going to say, and they also understand at this point why he says it. He’s a positive, caring person, and he isn’t going to be overly critical of his players. I do think it’s true that they’re only 5-6 plays per game, in most cases, away from winning a lot of them. It’s just, at this point, it’s getting tougher to believe that they’re capable of making the changes to get all those plays to go their way on a consistent basis.

Q: Well it’s a bye week which is nice for those who are banged up. We travel to ND to face a fringe top ten team.

Will we be able to run against a pretty decent ND line, or will we just try and out strength ND head to head by throwing the ball?

A: My guess is that they’ll try to throw the ball. From listening to Harrell this week, it’s obvious that he doesn’t see a need to ever throw an incompletion in this offense. If a guy isn’t open downfield, someone else is closer to the line of scrimmage. To him, it’s about being disciplined enough not to try to fit a ball between defenders when you can check down to a running back or a receiver two yards downfield and give him a chance to make somebody miss in the open field. I think Harrell sees check downs to running backs out wide a little bit like it’s part of the running game. It’s a way to keep those backs involved and pick up positive yards when there’s nothing there to throw to.

Q: I have an air raid question based on what I know from Leach’s air raid in WSU.

Leach never calls run plays. They are usually a check down by the quarterback decisions at the line of scrimmage based on the number of defenders in the box and what the look the defense gives. Leach really relies on QBs decision making.

How does Harrell’s offense differ? Does Harrel allow and have his QBs call run games at the line of scrimmage, check down or allow them to check to different plays? Harrell seems to run more of an equal number run vs the pass, vs Leach calling equal number of plays for each skill player instead of worrying about runs vs passes.

Do we actually call run plays from the booth or are they check downs at the line of scrimmage?

A: I believe there are run plays called in this offense, and we heard from Slovis this week that Harrell tells them over and over, unless you know you have someone wide open, you have to hand the ball off on the RPO. So he does preach the run game more than Leach seems to.