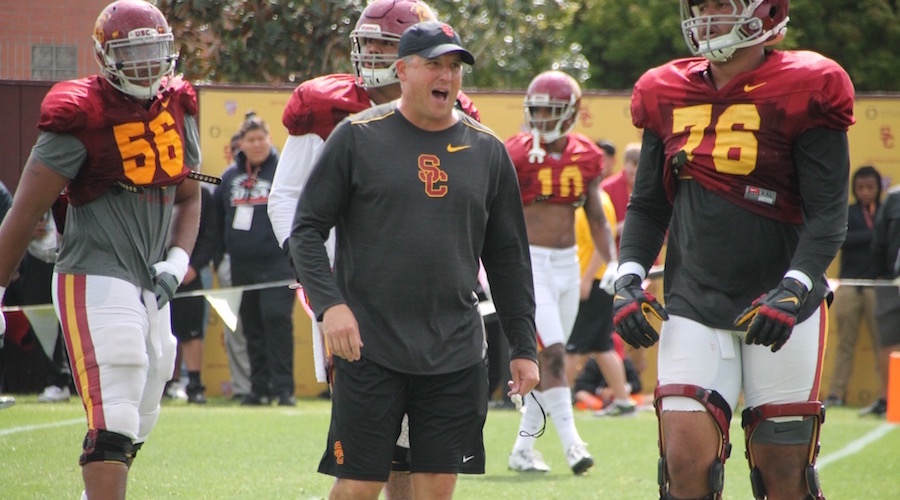 How would you rate this spring camp as a whole compared to the last 7? (in the interest that last year’s season was not a fluke).

The biggest thing that I’m taking away from this spring is the feeling that everyone is pulling in the same direction. Helton has a really good handle on the team these days and there are so few distractions or issues. It helps when there is a lot of talent but we’ve seen USC teams in recent years with talent that didn’t have the foundation that Helton seems to have in place.

With a new RB coach does Vavae pass Ware on depth chart?

It’s an interesting question. Yes, Vavae had a very good camp and I’m anxious to see what he can bring to the table but it’s important to remember that Ware was banged up for much of spring so he wasn’t out there showing what he can do. When we’ve seen Ware in game action he has some skills too and I’m not ready to leap Vavae over him just yet. Let’s see where things go in the fall.

What do you believe the offensive line depth chart will be at the start of fall camp?

LT Edoga, LG Hemsley, C Lobendahn, RG Viane, RT Nico. This obviously puts Toa at center and Nico at tackle, it could just as easily be Nico at center with Toa possibly at LG, and Hemsley (or Brown) at tackle. Lots of options.

We heard a lot about Jamel Cook and Velus Jones after the first 2 weeks but not much since. Is Jamel behind Ajene right now on the depth chart? Is Velus behind Deontay/Pittman/Vaughns right now at WR?

That’s accurate as both those players leveled off a little as spring has gone along. Velus is lining up in the slot behind Deontay as the starter, while Cook is the primary back-up to Ajene in the nickel corner role. Velus is also getting a look as one of the return guys on special teams.

Who do you expect to return kicks/punts in the game opener if you had to pick based on spring results? Is there a big performance gap between your top two returners?

My guess would be either Deontay Burnett or Jackie Jones. I think a lot of people have looked at JackJack as the likely replacement for Adoree’ in the return game, and that may happen, but I’m not ruling out Burnett. The coaches have so much confidence in him and that could tip the scales in his favor early on.

Any chance you can share any insights into the dynamics of how this coaching staff works? Who are the motivators? Who brings the humor? Do you ever see any disagreement or conflict between the coaches? Clay Helton: players’ coach or hard-ass? What, if anything, has changed with this staff since they came in last year?

I mentioned above about everybody pulling in the same direction, and a lack of drama this spring. I think that all stems from the top down, from Clay Helton and his assistant coaches. Clay has done a great job of surrounding himself with guys who fit his style and it just creates a real good vibe around the program. Darnold made a statement the other day about Helton “when he tells you something you can take it to the bank” and the players love that part of him but he also sets guidelines and holds players to them so the atmosphere isn’t too loose. As far as changes in the second year I don’t think there is any substitute for the confidence of winning, and you clearly get the feeling this spring that the coaches and players have a real good understanding of each other.

With Iosefa looking nicely bulked up, what is Houston going to need to be at weight-wise in order to get the nod in the middle? Or do you see both getting time depending on the package? Are you sharing my 2003/4 vibe I’m feeling?

So far Houston is getting the nod as he went with the 1’s the entire spring at the Will backer spot, while Iosefa was backing up Cameron Smith at Mike. With that being the case it appears as if the coaches are willing to “trade” the athleticism that Houston brings in exchange for a little less bulk. There have been situations where both are on the field at the same time, with Houston moving to more of an OLB look. And yes, the 2003 feeling is definitely there.

How would you assess Jack Jones improvement in cover skills and technique so far this Spring? He is a special athlete and expect great things from him, but when pressed into service during the Rose Bowl his rawness was evident when he got beat pretty badly a couple of times.

I would say a work in progress. Jackie is still in a battle with Isaiah Langley for the starting spot and there aren’t too many questions about his talent, it’s more a matter of finding a comfort level for Clancy to have him out there full-time. I think it’s a similar situation for Cook, there is a lot of comfort with Ajene but Jamel isn’t at that level yet.

Do you feel Clayton Johnson is ready for his shot and we have got much more athletic and fast vs mass of last year. do you feel that will work well with Sams running ability

Clayton had a good finish to spring. I don’t know if it’s enough to put him in position for a starting spot when falls rolls around but I’m not ruling it out. He’s been working primarily as a reserve LT with Chuma ahead of him, and I get the sense the coaches would like to see Chuma locked down in that role if at all possible. I do think no matter which starting 5 is out there that we will be a more athletic line than last year, and that could play well for Sam.