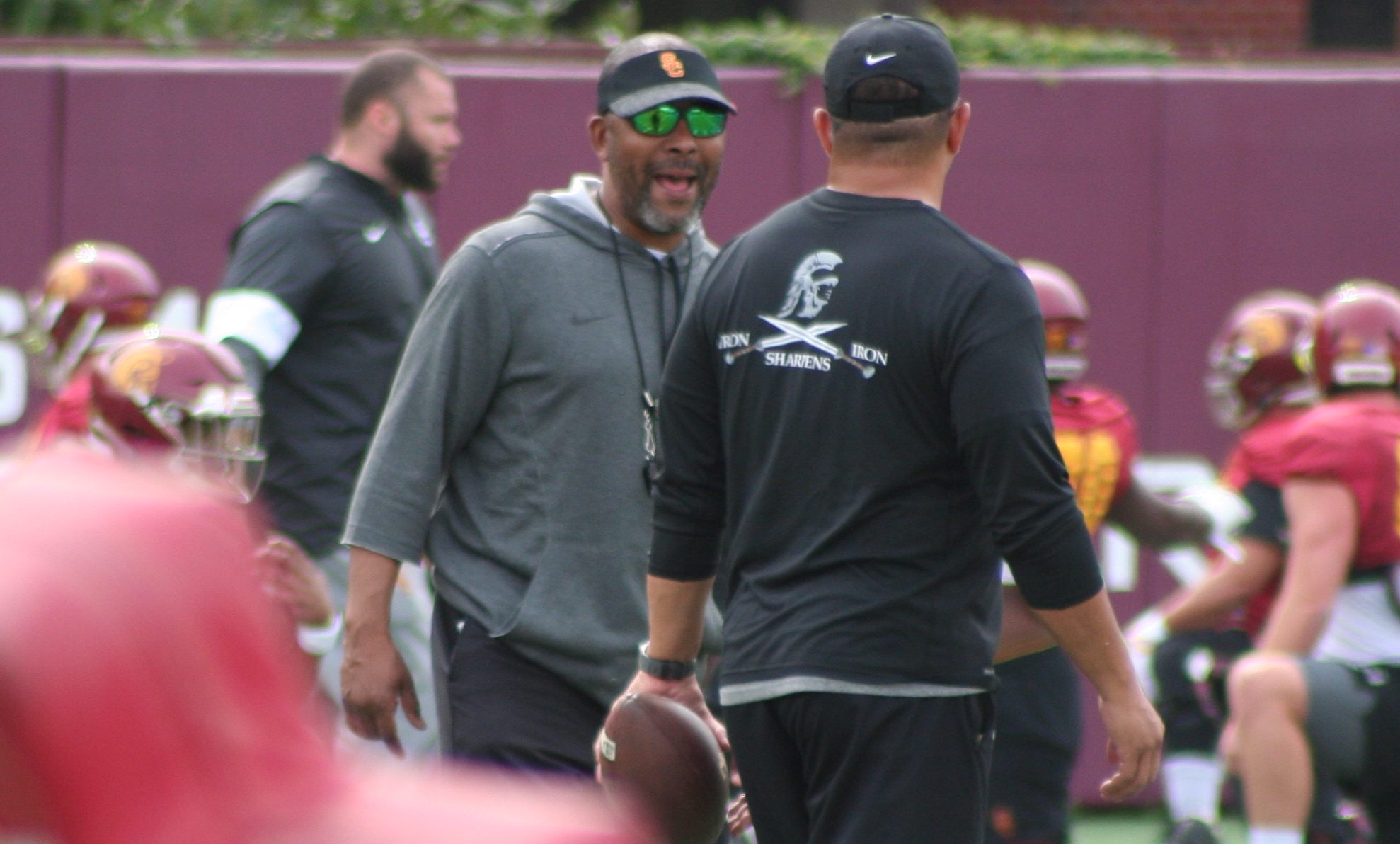 This week’s mailbag tackles questions about the projected starting lineup, offensive checks, what the new coaches bring to the table, where this recruiting class could rank, and what the first six games mean for the season.

Q: Is Texas S Dorian Hewitt still on track to arrive in the fall?

A: I haven’t heard anything concrete that says he won’t be here in the fall. It wasn’t a surprise that they’ve already lost a few members of the 2019 defensive back class, when signee Jaylen Watson announced he would remain in junior college, and Trey Davis entered the transfer portal.

Q: Can you take a shot at what you think will be the starting O & D on 8/31?
Also, what’s your take on why schools aren’t allowed to have at least one practice scrimmage with another school during fall camp?

Of those spots, I’m looking at quarterback, running back, tight end, and right tackle as being real battles this fall. On defense, I think that SAM linebacker spot and a cornerback spot with Greg Johnson pushing for a start could be interesting to watch.

As far as schools scrimmaging other teams in the fall, didn’t USC just schedule UC Davis?

I just don’t know how much coaches would actually want that. Any schools you are close enough to scrimmage in the fall that are playing at your same level is a school you’re probably already playing that season, and coaches are so secretive about things, there’s no way they’d want to show their hands at all. Also coaches are pretty controlling, so I’m not sure how much they’d like giving up a chunk of their practice time to something where they didn’t have full control of what was going on.

Q: I do not remember the exact number but Harrell said he has “installed” the offense of what? ten plays? I can see the core plays being low but not the added options that can apply within that play. Have you got any input (other than “go to the green spot”) that the QB and receivers automatically do within those core plays based on defense keys?

A: I don’t remember him every saying an exact amount of total plays. He did say it took three days to fully install the entire offense, and he mentioned once that they had four running plays, although I’m inclined to believe that he was purposefully underselling that. I certainly believe that the total number of plays in this offense is very low, and that’s something we heard from just about every offensive player during the spring. As far as hot reads go, that’s something the quarterbacks and wide receivers worked on extensively after the initial install was completed, but exactly what the receivers and quarterbacks are trained to do when they see a specific look from the defense would likely fall under “strategy” and is not something on which we’d be able to report. But I do think there is something more, as far as “go to the green spot.” It allows wide receivers to run the route called, but make in-play adjustments that both they and the quarterback see. For instance, if a receiver is running a dig or a drag route that’s designed to go 12 yards downfield and then in, but there are linebackers dropped 12 yards downfield, you’d better see that and cut your route short a bit so you don’t just run into the coverage.

It’s not going to be something where every receiver is just improvising on every snap, because the plays/routes are designed to get guys open and no defense can be prepared to cover every guy perfectly on every play. But it gives the receivers a little freedom, so we aren’t watching what happened last year, where corners knew the USC receivers were running 5-yard hitches, so they just sat there and the receivers would often times get themselves covered by just running into the cornerback and turning around.

Q: Erik, we’ve heard about Harrell, Burns, and Kauha’aha’a, in addition to what we know about Drevno. How about the other new coaches, what are they bringing and how will they make us better?

A: Well you took most of the new coaches. Outside of the four you mentioned, you have Mike Jinks (photo above) with the running backs, Joe DeForest with outside linebackers, and Keary Colbert moving to receivers fulltime.

I like that Jinks is very familiar with the Air Raid, and he also has experience as a head coach. For an Air Raid coach, he is big on ball control and we saw him get really fired up when it came to pass protection drills during the spring.

DeForest was a defensive analyst with USC last season, so while he’s a new fulltime coach, he isn’t completely new to the program. It was interesting to watch him during the spring because he really only had his own group of three players he was working with, in Hunter Echols, Malik McClain, and Eli’jah Winston. This is a young group without a lot of experience, and you’re looking to capture the magic of Uchenna Nwosu at that spot, so it won’t be an easy task. He doesn’t have a lot of experience strictly with linebackers, but he has been a college coach for nearly 30 years, so he understands how to connect with players and relay the fundamentals of the position.

Colbert worked with the inside receivers last year and now gets the whole position to himself in 2019. We’re still learning a bit about his coaching style and what he’ll be able to get from this group, but I don’t think there’s a more talented unit on the roster from top to bottom.

Q: What scenario is more likely: The USC Trojans leave the Pac-12 and go independent or the Pac-12 university presidents fire Larry Scott?

A: I’d have to say the Pac-12 presidents getting rid of Larry Scott, because I don’t see USC ever going independent.

Q: Recruiting, Recruiting, Recruiting.
If you could speculate for me, where would you guess USC’s class ends up this year? Top 15? Seems like alot of gets(recruits) of the past are going, going, gone. Can you remember a season( especially the 1st 6 games) with this much significance as to the next few years of the program. Seems like like win alot in exciting fashion, the program catapults itself back to top5 recruiting. Anything less and its a few more years ( no matter the coach) of frustration.

A: I think USC winds up in the top 20, but outside of the top 15 again. I think it’s true that recruits wanted to wait and see what was going on with USC this fall, but it’s not as if other programs were waiting. Schools were recruiting hard with USC kind of stuck in neutral and they’ve been rewarded for it. Guys like Kendall Milton, Jalen McMillan, Clark Phillips, Myles Murao, and Jordan Banks weren’t going to wait around forever to see how things at USC played out, and schools on more solid footing proved to be better options for them at this point. I do think there is a scenario where USC could get back into things with some of the region’s top prospects, but again, that won’t happen in a vacuum, and other schools will have a huge head start.

Q: While I realize the schedule opens with a very difficult 6 game stretch, regardless of if we’re home or away, there’s not one single team on our schedule that I don’t believe with all my heart that we aren’t the superior team and should win the game. Having said that, if this team can stay healthy and catch a few lucky breaks, is there any reason to believe this team can’t win the PAC-12 outright and play in the 2020 Rose Bowl?

A: In years past, this would just be another Pac-12 schedule that shouldn’t scare USC at all. Now, the first six games look terrifying. But I agree, if a few interceptions and late-game mistakes bounce USC’s way last year, the record looks a lot better. The issue is that those two things don’t necessarily make you a better program, even with a better record.

We need to see this fall that USC is a better program than they were last year. I believe it is, but we won’t know for sure until the games start. Based on last year’s results and attitude, there’s no way this team goes to the Rose Bowl. Based on the optimism and work ethic we’ve seen from the team this spring/summer, I’m with you and inclined to say they have a legitimate shot of surprising a lot of doubters this fall. But again, this team has a lot of “ifs” associated with it right now, because they haven’t done anything to prove themselves yet.

Q: Erik, over the last couple coaching regimes, we have had players transfer, some highly rated, some not. Why have none of the players that transferred went on to be high nfl draft picks or blown up at their new school? Is this due to a evaluation miss by the coaching staff, player development, etc?

A: I think a lot of times it’s along the lines of an evaluation miss. Sometimes you bring a guy in expecting great things and for whatever reason, it doesn’t work out. A lot of times it’s a work ethic issue, or someone just not clicking with the program. Sometimes you bring a guy in because he has an A+ trait and you think you can build a complete player around it, and sometimes that just doesn’t happen. Most times, if a guy is going to be great, he’s going to be great anywhere. And if a guy is great, that means he’s playing a lot. And if he’s playing a lot, he’s not looking to transfer.