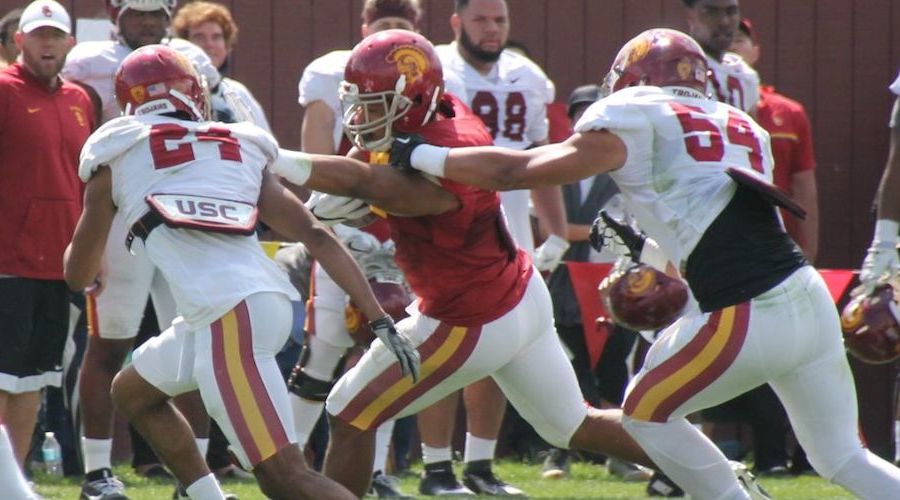 In this edition of the mailbag we answer questions on Roy Hemsley, Velus Jones, the safety position and summer workouts.

I know Roy Hemsley has been running with the 1s at RT…..how has he looked and is he a legit option to start there this season or are we just waiting for Toa to get healthy?

Roy has been running with the 1’s all spring, for the first 2 weeks it was at RT but on Tuesday he and Chris Brown flipped, so Roy will be at LG for a while. The coaches want to get a look at these two players to find the best starting 5, and I would definitely project Toa to be somewhere in that 5 (along with Nico) when both of them are healthy. And that means Hemsley and Brown are likely to be competing for one open spot

How would you handicap the chances that EJ Price is a part of the team in the fall? And, if so, do you think he will be a starter for us on the O-line? There seemed to be a lot of positive feedback on his abilities before he left the team last fall.

Hard to say on the chances because we just don’t know much beyond the fact that Price is enrolled for spring and wants to come back. We don’t know where Helton is on the subject, what his standing is with the university, etc. But I do think there’s a chance he comes back, I don’t think he would be enrolled if there wasn’t a chance. Talent-wise he would be a terrific addition, I was pretty impressed by him last fall when he was here.

After Daniel who is #2 TE

I would still say Tyler Petite. Cary Angeline has shown some good things but so has Tyler.

Outside of Velus Jones, which young WR is making the biggest impact?

I like what we’re seeing from Tyler Vaughns. Michael Pittman has been good too but Vaughns has stood out to me with some of the catches he’s made.

Who are our #1 three down lineman currently?

Rasheem Green, Marlon Tuipulotu, Christian Rector. In a 2-down lineman set it is Green and Tuipulotu. Here’s a look at the depth chart from what we’ve seen so far in spring.

I know there’s only one Adoree, but do you see anybody on the team that has the ability to generate some of the same type of excitement and explosiveness on the punt and kickoff returns?

Helton has made it clear this spring how much he likes what Velus Jones is bringing to the table in the speed department, and for good reason as Jones is making a lot of plays. I think a lot of people expected Jackie Jones to be the eventual fit for the role but so far it’s been Velus showing more.

I have gone on record as being very critical of our starting S duo, we gave up some big plays that I found our S being out of position. I personally like Cook/Ross as our starters, but how comfortable are you with our starting S still being Hawkins/Tell going into our season opener? Do you think we would see a change in our starters during the season?

I think Hawkins and Tell are pretty established right now as veterans who understand what Clancy is trying to do, and that goes a long way. Ross has been a pleasant development this spring but I wouldn’t say he is pushing either guy yet. And Cook has been primarily in the slot, he could always move back to safety if needed but right now he’s the #2 slot guy in the nickel package behind Ajene Harris.

We know Jamel will play. How do you see this shake out between Jamel and Ajene?

This will be a situation to watch. I’m not looking to move Ajene out of that spot by any means but if Cook keeps progressing I don’t see how you keep him off the field. Jamel is making plays right now when he admits he doesn’t know the new position yet, imagine how he will be as he gets more and more comfortable.

What are the NCAA rules for summer session (5/15/17 at USC) early entry scholarship players that would allow USC 2017 signing class an early start on academics before pressures of the season? Which 2017 USC football signees will be attending summer session for player workouts, training table, and early academic headstart? By comparison Alabama already has 13 early enrollees on campus from 2017 signing class.

As I understand the rule, a player is able to get started with the SC summer sessions once their high school class has graduated (most of them arriving in mid to late June). These days it’s pretty much unanimous that a recruit is going to show up early for precisely the reasons you mention in terms of getting a start on the transition to college life. Those players arriving in summer are different than the early enrollee players who are already here and taking part in spring ball, USC has 5 of those (Jack Sears, Tayler Katoa, Damon Johnson, Marlon Tuipulotu and Andrew Vorhees).

Jake is out there every day and he takes snaps on the side but he doesn’t take part in any of the live on-field kicks.

With Velus Jones seemingly showing the deep speed to keep defenses honest, do you believe that this will make Joseph Lewis more of a red shirt possibility?

Is it etched in stone that Burnett will be in the slot? It seems like Velus is showing well and Mitchell is expected back. They can’t all play at once. Is Burnett taking any reps on the outside?

I’m going to combine these two questions because they kind of go hand-in-hand based on the impressive showing we’ve seen from Velus Jones. First of all, in regards to Burnett, Deontay could definitely play outside and does so in some multiple receiver sets. The USC receivers are pretty versatile in terms of being able to line up in multiple spots so if Velus continues to play like he has I definitely think he would be in the rotation when the season starts. And you’re right, if everyone is healthy (including Mitchell), there would be a lot of depth at receiver and I would love to see Lewis get redshirted (I’m not betting that way right now).

How is Pie Young looking at WR thus far? In reality, will this year kind of be like a redshirt year and he is likely to be a non factor at WR this season? Are there too many challenges in learning a new position and too much to overcome with learning the playbook as well as competing with the other more experienced WRs?

I’m more optimistic for Pie’s future at receiver than I was at corner because I just think his skills fit better on offense. But, as noted in the previous question, there is a lot of competition in front of him at receiver too. Helton made a point to talk about how natural Pie seems on offense as a route runner and pass catcher so I don’t think it will be a case of him being challenged by the transition, I think the challenge will come more from the others at the position.

Nico and Toa: Lobendahn has already played a lot of ball for us, whereas Falah hasn’t gotten that many snaps. Is it safe to say that Toa gets his old position back as soon as he’s healthy, but Nico still has to win playing time once he’s feeling better? Or are they both a lock to start, once they get healthy? Any word on their recovery and eventual return to play?

I would be very surprised if both of them aren’t back in the starting line-up once healthy (Nico started 12 of 13 games last year, that is plenty of snaps). I’m not entirely sure where they will be, it’s safe to say one of them will be at center and the other could be at LG or RT. That would be my guess, although I’m sure Chris Brown and Roy Hemsley would love to throw a wrench into that thought