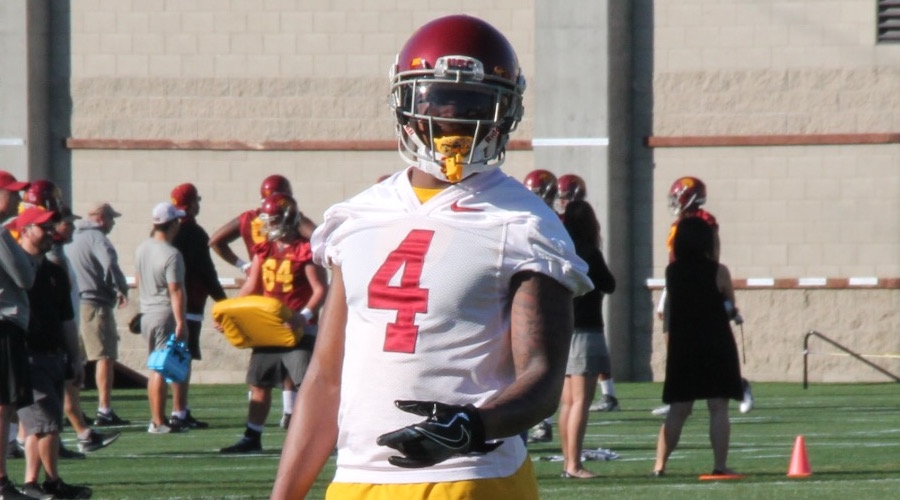 In this edition of the mailbag we talk the back-up QB role, the forecast for Roy Hemsley at RT, the tight end position, linebackers at The Opening regional, and more:

For two years nobody has seen John Houston, #1-ranked inside LB in the country by ESPN, so it’s good to see he’s in the starting lineup so far. Is he really over his tricky back issues? And can you see the raw abilities so far that made him such a highly ranked HS recruit?

John was able to consistently practice as the season went along last year so by that account it seems like his back issues are behind him. Through the first three days we’ve seen what you would expect to see from John and that is a pretty athletic guy navigating that middle area. That part of his game has never been a question, but his ability to be a physical force is what will determine if he is able to hold off guys like Jordan Iosefa and Tayler Katoa. We haven’t really seen enough so far to really know where he’s at in that area.

It seems like the coaching staff is using the Spring camp as an evaluation period to determine who they can trust to be the backup QB in the Fall. They are giving Fink and Sears as many reps as they can so they can be coached up to be the designated stand-in this season and the next. Do you agree? Also, is the best thing for Jalen Greene is to focus on being a complete wide receiver?

I think that’s a pretty fair assessment. And I really hope one of them (Fink/Sears) is able to grab the #2 role because I would hate to see them have to move Jalen back to QB. It’s a dependable option to have if needed but I want to see what Jalen can do by sticking to wide receiver full time.

With the commit PK of McGrath, does that finalize Matt Boermeester’s time at SC?

I definitely think it’s a sign in that direction. There hasn’t been any kind of announcement one way or the other from the school on Boermeester yet (the fact that it’s a student conduct issue takes it out of the hands of the football program) but we aren’t hearing too much hope that he might be back.

How is Velus Jones looking? Could he be the “speed” WR that USC has lacking the last few years?

The speed element from Jones is one of the things that jumped out the most in the first week, and he was used in a variety of ways to get the ball in his hands.

What percentage would you give Hemsley’s chances of earning a starting position somewhere on the O-line? What is your assessment of his progress, and do you feel that he can be good enough to be a USC-caliber starting offensive lineman? In your interview with him he says his athleticism is his strength. He is one very large human. He’s obviously smart too. Could he develop the toughness and hunger to combine with these attributes and excel? Very curious about him and I hope he does well.

He’s got a chance to be the starter but so much depends on what he does this spring to develop a confidence level with the coaches, especially before guys like Toa Lobendahn and Nico Falah come back healthy for fall camp. There’s no doubt Roy has the physical traits to be a good one but your questions about toughness and hunger are going to be the determining factors for him. He came from a small school, and was a basketball player for much of his HS career, so he needs to develop the mindset of being a dominant football player, it’s not something he came to USC with. The coaches obviously like enough of what he has shown to put him with the 1’s right now, it will be up to Roy to see if he stays there.

Garry, How much of a look is JJIII getting from USC? Love to see a third generation Jackson at SC, IF he’s good enough!

The coaches are well aware of him, and the fact that he plays at Serra means there will be plenty of continued looks throughout the process. John is continuing to work on his speed this spring as he transitions full-time to the receiver spot, and he’s showing well with Ground Zero on the 7-on-7 circuit.

Any way to confirm if EJ Price is still on Football Scholarship at USC? And any thoughts as to his situation.?

The university has confirmed that he’s enrolled in school for the spring but there haven’t been any details provided on his scholarship status. According to Chuma Edoga, Price does want to return to the team and I can’t imagine he would be here as a student unless he was given reason to think it could happen at some point.

I do think it’s a position of strength this year, and one of the best parts is that we’ve got a quarterback who has shown he will use them. It wouldn’t surprise me if we see even more 2-3 tight end sets this year as part of the offense, or if we see 50-60 catches from the position overall.

Did gaoteote seem to bond with any particular recruits or LBers at the camp? Is he close to solomon or not at all? Would love to see a situation like marlon tui and tufele who want to play together.

There was an obvious comfort level from some of the Polynesian linebackers in the group including Palaie, Solomon, Merlin Robertson and Noah Sewell. Palaie had an exchange on social media after the camp asking if he was now a member of PTP (Prime Time Polynesian, the group that is run by the Talamaivao family and has Solomon’s father involved as well).

New year, new team, new rising leaders. Who are the most vocal leaders that stand out thus far? As you look at the offensive linemen, who stands out as the leader of the pack?

Chris Hawkins is showing as much leadership as anybody, he’s a very respected voice on the field. I also noticed Ajene Harris and Iman Marshall doing a lot of communicating out there, as well as Uchenna Nwosu. And, of course, Cameron Smith has earned a major leadership role and is the centerpiece of the defense. On the o-line, Toa isn’t in the line-up right now but he seems to be the biggest leader of the group. It’s not a particularly vocal o-line (maybe the absence of Zach Banner just makes it feel different) but guys like Toa and Viane definitely have an elder statesman vibe to them.

Do you think any of the Frosh WR`s have a chance to see significant PT considering the remaining WR`s and all the experience we lost?

Definitely. Of the freshmen who redshirted, I see Tyler Vaughns and Josh Imatorbebhe in the mix right away on the outside, and I think Joseph Lewis plays in the fall when he arrives too. In the slot, Velus Jones sure looks so far in spring like he can get some playing time, hard to judge on Trevon Sidney since he will sit out spring after hip surgery and we don’t know where he will be in fall.

Hard to determine so early, but which RS Freshmen do you expect/think will contribute the most next season, and who will remain on the sideline to continue to develop?

I think the ones who will contribute the most are Josh Imatorbhebhe, Tyler Vaughns and Jamel Cook. I also see Velus Jones, Cary Angeline and Vavae Malepeai getting action, how much is still to be determined. Guys like C.J. Pollard, Frank Martin and Liam Jimmons are probably another year away from really having a role in the rotation. Matt Fink is also TBD, as is Michael Brown, they are still in play for key roles. Trevon Sidney depends on his rehab, while Nathan Smith will be out with his knee injury.