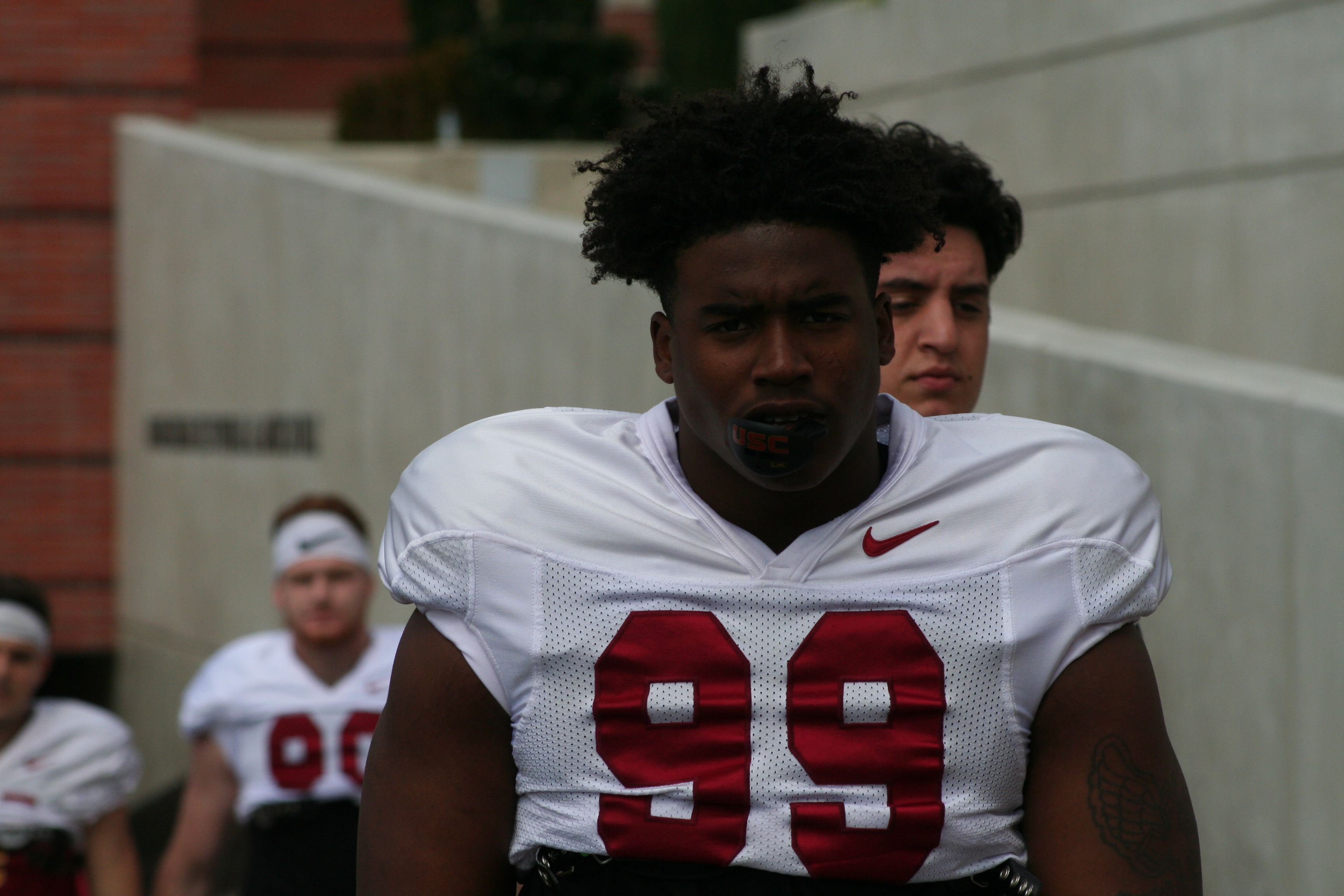 This week, we answer reader questions about recruiting offensive linemen, ranking spring ball performances, and finding a cure for the doom and gloom blues.

Q: Is the any cure for my Doom and Gloom blues?

A: If the last three months didn’t do it, I’m not sure I have anything else for you before the season starts. Based on spring ball, I think it’s safe to call every coaching change an upgrade. There is an actual identity to the offense and a guy calling it who is in full control of something he knows every inch of. The defensive line looks to be very much improved from last year. There is a greater team buy-in to a strength and conditioning program that looks to be producing results. Two must-gets from the 2019 recruiting class found their way to USC four months after signing day. There looks to be a star already from the 2019 class in Drake Jackson, and the quarterback, Kedon Slovis, who was very much an unknown, looks to be very much a legitimate prospect. Recruiting is picking up with the recent summer camps and some big name prospects set to visit soon.

I completely understand that there’s a mindset that says keeping Clay Helton as head coach and Clancy Pendergast as defensive coordinator guarantees another 5-7 season. I know that thought exists for a lot of USC fans. Helton is never going to hit in practice the way some USC fans would want him to, and he’s never going to change the Heltonisms he uses in press conferences that seem to drive some fans crazy. I understand that exists and I understand that nothing but a 5-1 or 6-0 record through the first half of the season is going to change that for some people.

But right now, this program has built as much forward momentum as just about any program in the country could after a 5-7 season. They still have a whole heck of a lot to prove during fall camp, and even more once the games start counting for real. But right now I have a tough time seeing this season play out as simply a continuation of last year. There is still talent on this roster, and I think right now, that talent has a purpose and a direction that was lacking at times last season.

Q: So when will we hear if there are commits who didn’t qualify for any reason?? Seems that a couple are conspicuous by their absence…and at this point, do you think we’ll just pocket that scholarship for next year?

A: I don’t think there’s any doubt that USC won’t be bringing in their entire 2019 signing class, simply based on the quotes from Chris Steele saying that USC had a scholarship open up after not having one when he first entered the transfer portal. I don’t like to speculate much about academics, but when there’s a high school head coach reassigned during an investigation into academics, and you’re expecting to have a recruit from that school, you certainly assume there could be an issue there.

There would need to be more than one academic casualty in order to have an extra scholarship to do anything with, as Steele grabbed one already. If that winds up being the case, I would expect the staff to explore all possibilities with it before simply rolling it over to next year. With the transfer portal, there’s no telling when someone could become available. And if it’s a grad transfer at a position of need who the coaches feel could help on the field, it would make a lot of sense to use the scholarship there. But I could also see the ultimate decision being to hold onto it, in order to create another space for a 2020 early enrollee to count against, to help bolster what could wind up being a smaller class.

Q: Any news when Salute to Troy planned? Heard only rumors, no email from HH

A: Still no official word about Salute to Troy this year, but Greg Katz tackled the subject a bit in this IMHO Sunday story, in the “Save the date” section.

Q: In regards to our recruiting on the OL. Are we moving away from targeting fewer guys, in that we missed so badly last year? Seems like the new strategy is to load up earlier with guys (who may be more of a stretch) that will be more likely to stick.

Q: Read an interesting article on OL Coach Drevno. He talks about the very specific physical (such as flexibility/quickness in feet and hips) and mental characteristics he looks for in OL recruits. He doesn’t care about successful technique in high school because he figures he’s going to re-mold them anyway using his techniques. It sounds like under this formula we could end up with a lot more raw, unheralded guys that he feels he can develop into top-flight linemen. And that looks like the pattern that’s happening now with OL recruiting. Any thoughts about this approach?

A: Going to tackle both of these offensive line recruiting related questions with one answer here. As far as total number of offers, I like the increased amount that have gone out recently, specifically to west coast recruits. In a year like this, where there aren’t a bunch of slam dunk local kids that you’ve known about since they were freshmen, it was going to take some scouting and evaluation. I think that’s an area where Tim Drevno really excels. I love the coaching opportunity the elite camps offer the USC coaches, where they can get a really good look at a handful of their top targets in a practice environment, and they can see if things click from a talent standpoint, but also whether the recruit is coachable and how they do in the film room. The offers and commitments that come out of those camps are going to carry a lot of weight for me, because of that evaluation environment.

As for recruiting raw, unheralded guys, it becomes an issue of body type, where it’s really difficult for a recruiting site to give a five or high four-star ranking to a potential offensive tackle who weighs 240 pounds going into his senior year. But if you look at the four offensive tackles taken in the first round of the 2019 NFL Draft, and where they were ranked coming out of high school, you’ve got Alabama’s Jonah Williams (who was unanimous as a can’t-miss prospect) and then a 240-pound three star tackle, a 230-pound unranked tight end, and a 270-pound three star defensive end. I have zero issue adding one or two offensive line “projects” who are athletic with good feet to every class. You’re seeing more and more of those guys turn into the top picks in the draft.

Q: Looks like Josh I heading for Illinois. Why do you think he did pan out at SC?

A: Injuries really took a toll on Josh Imatorbhebhe during his career at USC. An ankle injury during fall camp last year derailed him while he was angling for real playing time. Ultimately, the consistency just wasn’t there.

Q: Did any interesting prospects participate at RisingStars camp?

A: There were definitely a few prospects worth keeping an eye on, but USC’s Rising Stars Camp has changed a bit in its importance, taking much more of a back seat to the elite camps.

Q: How would you stack up Bru and Chris’s spring ball performances at their former schools compared to USC early entrants? Was Drake Jackson the top performer of the bunch? ( Bru and Chris included)

A: Not having been at Texas or Florida to witness the springs from Bru McCoy or Chris Steele, it’s tough to rank them like that simply based on reports. Drake Jackson (photo above) wasn’t perfect this spring, but it’s tough to imagine a true freshman putting together a much better opening spring than he did. If you’d asked me before spring ball to rank them in order of how much of an impact they’d have during their college careers, Jackson probably would have been No. 3. Now, I’d give serious thought to putting him at No. 1.