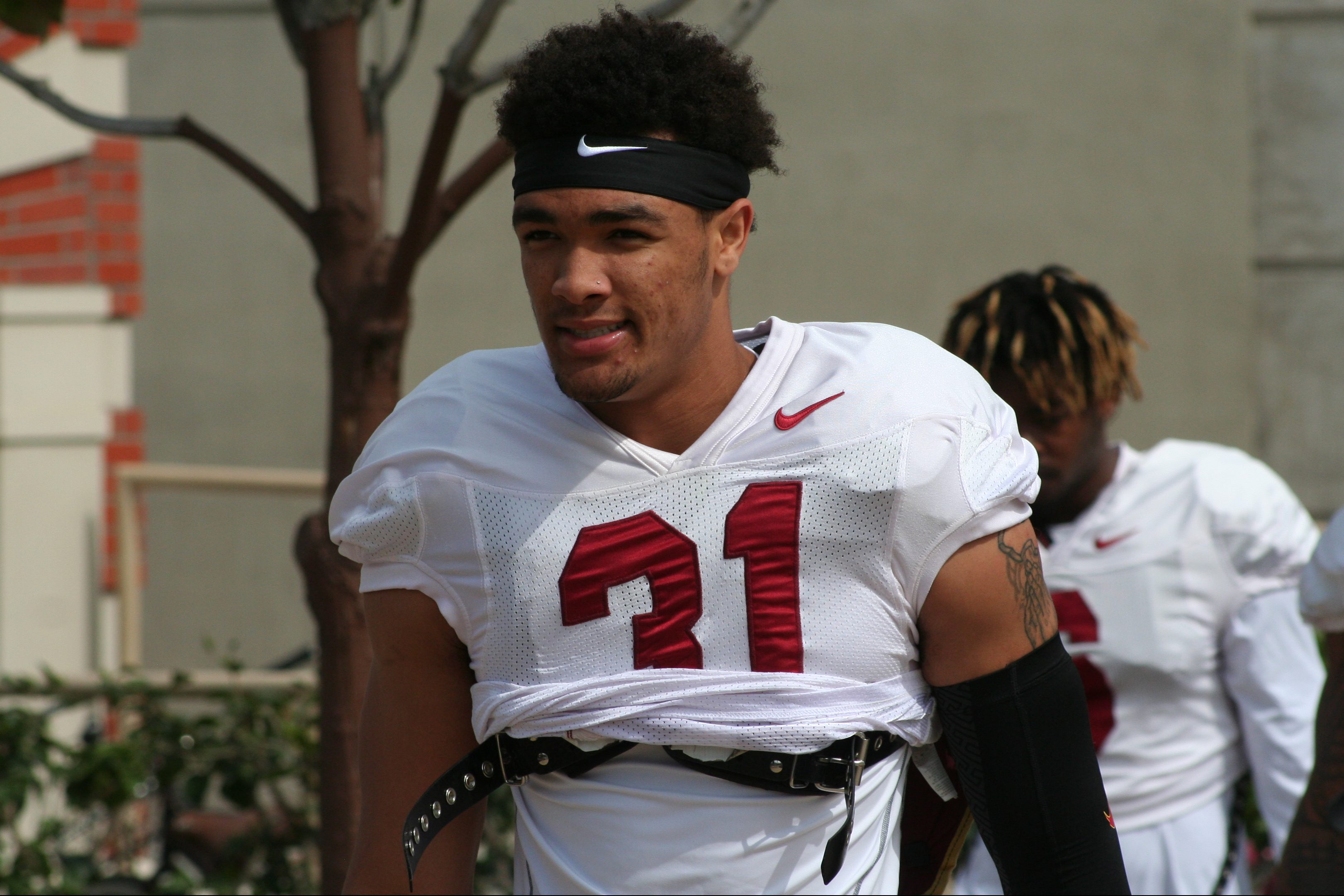 Reader questions this week cover local recruiting, breakout players from spring ball, and what to expect at outside linebacker.

Q: Back when USC was playing for national championships every year, we would lose top recruits to lesser programs because they could offer them immediate playing time and the prevailing attitude was if they don’t want to compete – we didn’t miss out and it’s best they went elsewhere.

Now that USC can offer immediate playing time the mantra has changed to the top players want to see how we do on the field this year.

How can USC overcome both of these perceptions in the future and get back to our glory days?

Do you see the coaches turning this to our advantage?

Realistically we could be 2-4 thru our first 6 games this year, yikes!

A: I will be shocked if USC goes into the season with just three verbal commitments. I would expect to add at least a few during the summer camp season when recruits can be on campus and spend some time with the coaches. The playing time issue can cut both ways for USC right now. There aren’t many established stars, but there are a lot of young guys at a number of positions, so you have to always be careful of just saying “playing time” when another staff can point to how many guys you’ve signed there in the past class or two.

The issue right now is 100% the narrative surrounding USC. There is so much speculation among recruits and people associated with recruits/recruiting as to Clay Helton’s job security that it can become a big deal to recruits. Nevermind the fact that a huge majority of them aren’t going to play for the same position coach for their entire college career and a lot of them won’t ever play for the head coach they commit to or sign with, despite him being nowhere near the hot seat at this point in time.

This staff recruits well and they recruit hard, and I expect them to be able to build some momentum heading into the season. The biggest thing will be your final point. That momentum is something that could fall flat in a hurry, or take off in a big way during and after those first six games.

How are we doing with the local blue chip talent (4* and 5*). I hate watching local talent end up in Eugene, Clemson, and Tuscaloosa.

Follow up question: What’s the chance we have a 10 sack guy this year?

A: It’s not as bad as it seems when it comes to USC’s chances with the elite local talent in this 2020 class. Obviously with the quarterback situation, nobody was going to get both Bryce Young and DJ Uiagalelei. USC went with Young and got a commitment. Only time will tell how things play out for those two (and I think Uiagalelei can be an absolute star), but I don’t see that as the wrong choice at all for this program and this offense. After that, Justin Flowe looks like the one can’t-miss guy in the state and USC is firmly in the mix for him.

Elias Ricks and Clark Phillips are two elite cornerbacks and it wouldn’t have been a surprise in another year for USC to lock them both up early. Instead, Ricks made a fairly surprising early commitment to LSU and Phillips had to wait a long time for his USC offer. I think the Trojans might eventually be able to get back into it with both if everything goes right this fall, but it’s a steep hill to climb for two guys who are very talented and play a position where USC needed a couple big names in this class.

As for the second part, I’ll say no because 10 is a fairly big number. Just 16 guys in all of FBS hit that mark last year. I do think USC could have a couple of guys in that 7-9 range though, as Christian Rector and Jay Tufele looks unblockable at times this spring.

A: The pace of play was much faster this spring, and there was more activity all over the field. There wasn’t a ton of extended full contact work, but the increased emphasis there was evident.

Q: What will the USC – Fresno State Score be?

A: 38-28. And obviously nothing that happens between now and then (like finding out who the starting quarterback for USC will be, or seeing how the offense line performs this fall, or, you know, even taking an initial glance at the Fresno State roster) will change that pick.

Q: Sounds like we are hoping that somebody from the OLB trio of Hunter Echols, Adbul-Malik McClain and Elijah Winston emerges as an effective pass rusher. After seeing them in the spring, are you hopeful that they deliver from that outside LB position? They all came in as highly regarded 4-star recruits. What’s your opinion about the potential of each one?

A: I’m hopeful they can deliver, but I’m not going to guarantee any kind of success there yet. I think that’s a very important position. We saw what the defense was able to do with a guy like Uchenna Nwosu there, and what happened without him. There has to be a consistent presence there that isn’t just eaten up by an offensive tackle alone on every rush. I think we saw the most from Echols (photo above) this spring, but I’m not ready to say that he’s ready to break out with a huge season yet. I’d still like to see a little more from him this fall, but I think he might be close. The other two are still young and it shows at times. There is a lot of talent there, and it’s easy to forget that Nwosu had just 1.5 tackles for loss during his first two seasons at USC. Sometimes guys really have to see the field for a while before we see what they’re capable of doing.