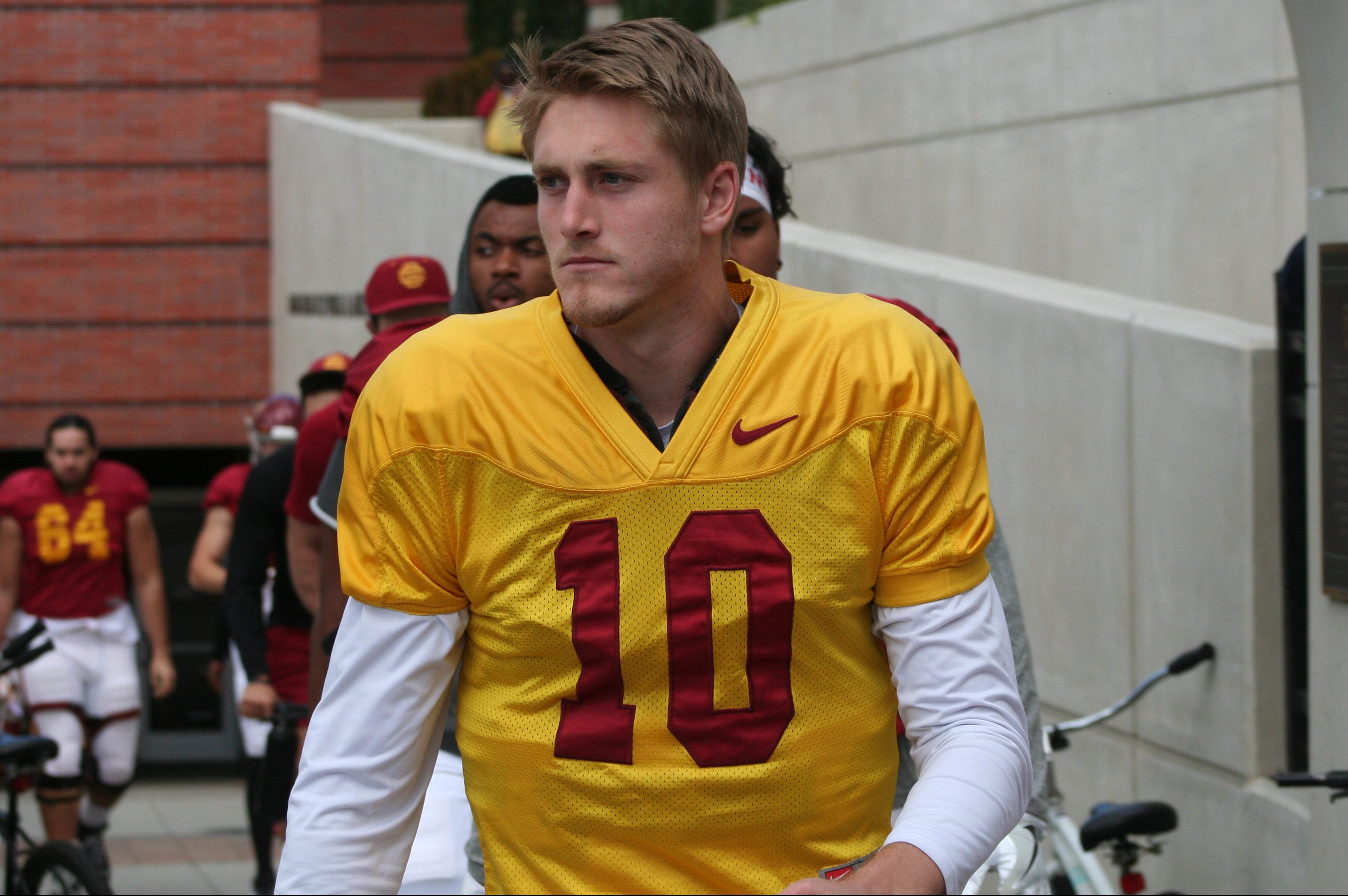 Q: Erik, I have a couple questions about Sears. First, do you think he is more prone to INTs than Daniels based on his practice performance, and if so, do you think the fact he tends to shine in games makes practice INTs less of an issue? Second, is his escapability really that much of an advantage in an offense that’s designed to get the ball out of a QB’s hands in 2-3 seconds? And third, who do you think has better accuracy on quick, short passes like slants, Sears or Daniels?

A: I do think Sears threw more interceptions this spring, but it wasn’t as if he was throwing multiple interceptions per practice. I don’t have the numbers written down, but it was maybe just a couple more over the 15 practices. I don’t think you ever just throw out practice interceptions because the guy might be a gamer, but not all practice interceptions are created equal. A pass that’s tipped in the air or if you’re trying to give a guy a chance on a jump ball and a defender makes a play, those are different than just flat out making the wrong read or overthrowing a guy by five yards. I obviously don’t have the same vantage point as the coaches, or the benefit of reviewing the film, but I don’t get the sense that his interceptions were cause for any alarm. Considering all the quarterbacks threw the ball a ton this spring, there were very few interceptions for any of them.

Secondly, his ability to run is a massive advantage if the quarterbacks he’s competing against are taking sacks on those same kinds of plays. If another quarterback has the offense humming by getting the ball out in two to three seconds every time, my guess is the thrower is going to get the nod.

Q: Hi Erik. Yesterday GoSC27 forwarded a projected depth chart for the depth chart thread, and even though I’m reasonably optimistic about all other position groups – even the offensive line – the secondary is frightening!! There is no experience and no depth, and a couple of the key players have been hurt. It looks like if even one of the safeties goes down SC is in a world of hurt, and the corners don’t look much better. Yes, they will receive better coaching and they weren’t that good last year, but this has red flags all over it.

What’s your take? Am I being melodramatic or is there legitimate reason for concern? And what do you think the coaches can or will do to put these very inexperienced players in a position to succeed? Thanks and Fight On!!

A: I love the potential starting five in the secondary. Talanoa Hufanga and Isaiah Pola-Mao at safety. Olaijah Griffin, Isaac Taylor-Stuart, and Chase Williams at cornerback. And then the first backups are solid as well, in CJ Pollard and Greg Johnson. But it is nothing but youth and inexperience after that, and that is definitely a scary thing for a unit that will need to rotate and has been injury prone.

True freshman Briton Allen got a ton of work this spring and will almost certainly be called upon to play this fall. Raymond Scott is an interesting option at nickelback behind Williams, and I’d never bet against Max Williams coming in this fall ready to contribute as he continues his rehab and got plenty of mental reps this spring. There are numbers joining this group over the summer in the incoming freshmen, but there aren’t those typical four and five-star instant-impact guys.

We’ll see how quickly a juco guy like Jaylen Watson can contribute, or if the coaches were able to find something in late additions to the recruiting class in Adonis Otey, Jayden Williams, or Kaulana Makaula.

Q: Hello Erik, Why doesn’t SC hold a legitimate spring game anymore? Is it because Cromwell can’t support an event like that or is the “Spring Showcase” the new norm even when the Coliseum is finished? Compared to Alabama’s A Day or other major programs spring games, our Spring Showcase is embarrassing. It looks like a high school summer camp. Why couldn’t we use the Banc of Cal Stadium, Dignity Health or maybe the Rose Bowl?

A: I don’t think Clay Helton is interested in putting on a full scale spring game regardless of where they could play it. He’s shown that he’s comfortable treating the spring showcase like any of the other scrimmage-oriented practices. We’ll see if that changes next spring when they have access to the Coliseum, but it would surprise me a bit based on what they’ve done to this point.

Q: I know it’s early but just wondering what your take is on the USC recruiting environment… The negativity surrounding USC in the last signing period was horrible– probably the worst since the Hackett years, with interest from top recruits drying up fast. Seems like many good recruits are now pretty open to considering SC, especially if SC starts winning and things stabilize. Thanks.

A: It’s really quiet with USC recruiting right now, but I don’t think that’s a bad thing. This staff is going to recruit really well and they’re going to get a boost from some of the new faces on the coaching staff as well as the ops staff. The issue right now is that if USC recruiting is a two-ton brick, it’s completely stationary because of last season and the coaching staff is trying to give it momentum by throwing their body weight against it. I think a lot of recruits like the direction this thing could go in, but they want to see it moving first in order to fully buy in. That might not truly come until the games start and every win is going to get that brick moving more and more on its own. I always say that individual wins and losses don’t mean much when it comes to recruiting, but right now recruits want to feel comfortable with the idea that there is going to be some stability at USC, and that’s just not going to be possible to prove to them until wins start piling up this fall.

Hello Erik and thank you for considering my question.

During Helton’s tenure (at least) five recurring coaching issues seems to repeatedly rear their ugly head. These would be:

To what extent do you think this issues have been successfully addressed? Thanks

A: 1. O-line play: I like what I saw from the offensive line in terms of their development from the first week to the last of spring ball. I think they’re getting the new system and I think this starting group has a chance to be pretty good this year. I don’t think they have the depth yet to withstand multiple injuries, but it should be a better overall performance from the starting group under Tim Drevno’s leadership.

2. Play calling/in-game adjustments to game plan: Obviously we have no idea about this quite yet because there hasn’t been a game to review, but this feels like it falls right into Graham Harrell’s desire for simplicity. Because the offense has to know so few plays, dialing up adjustments should be that much easier. I also think it makes a big difference that Harrell knows this offense inside and out, because it’s his system and he speaks it fluently.

3, 4. discipline, physicality: I’m lumping these together even though they aren’t exactly the same thing. We’ve heard Clay Helton’s Faith, Family, Football mantra for a few years, but Harrell brought his own with him, and his is Selfless, Tough, and Disciplined. He wants every decision every player makes on the field and off it to follow those three rules, which includes avoiding pre-snap and post-play penalties, and bringing toughness to everything they do. We’ve seen players, position groups, and the entire team having to do up-downs or running during or after practice as punishment for penalties, and there has been more hitting and tackling this spring than last.

5. player development: Again, it’s tough to get a full picture from the first 15 practices that this group of coaches has with the players, but there seemed to be a ton of teaching going on. And with shortened and simplified playbooks, the players got extended reps during individual drills that Helton obviously feels is going to pay off. I thought seeing flashes from guys like Connor Murphy and Jacob Daniel was huge in this regard, as veteran players like that just didn’t seem to be breaking through the past couple years. We’ll see how things go into the fall and if it keeps up, but I think there’s reason to be optimistic here.