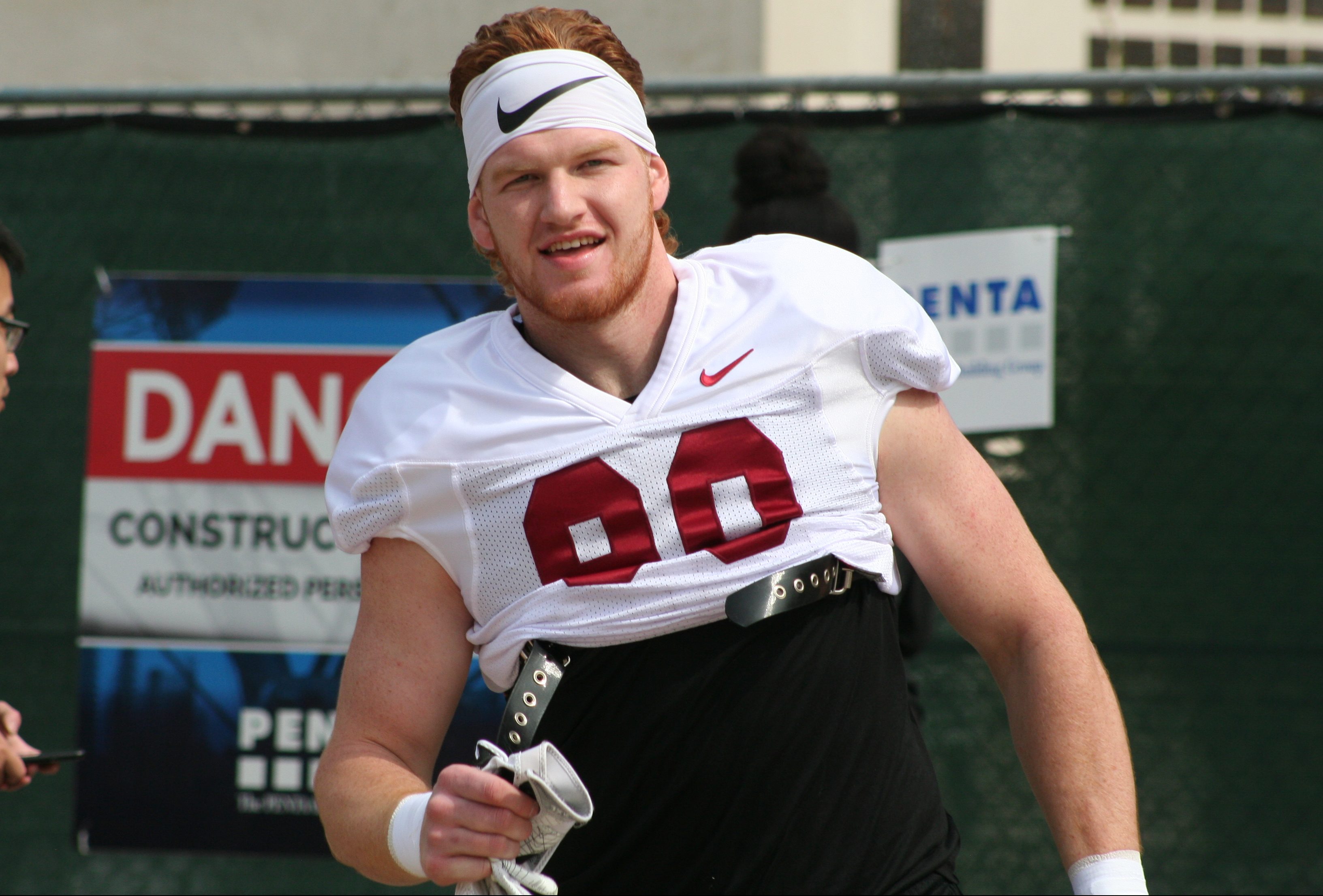 This week, we answer reader questions about penalties, depth, and the defensive line, among other topics.

Q: So many times over the last several years, a player will make a great play and then we get a penalty. What do you see with regard to the discipline of the team? Is the team playing disciplined football? Are the coaches requiring it?

A: I will say that Clay Helton is doing everything he can to stop the undisciplined penalties—everything from excessive celebration to lack of focus to poor technique. Players are being pulled to the sideline and made to do up-downs for any penalty. Helton did point to a long streak of plays they were able to run during practice without a penalty. We’ll see how things go in a real game, but there is definitely a lot of attention being paid to that part of the game during spring ball.

Q: After reading practice reports I have the impression that there is more physicality and more game speed tackling this spring than the previous Helton teams, but still nowhere near what Pete Carroll practices were like. Is this correct? I know nzaa had put some limitations on number of full pad practices but I don’t think they have put limitations on intensity of practices.

A: I think the practices have been fine so far in terms of how physical and how much game-speed activity they’ve been doing. After hearing virtually every coach talk about how much work needs to be done simply teaching technique and fundamentals, I honestly don’t mind if they held back on just letting guys slam into each other for two hours and instead spent that time doing a lot of individual drills and making sure guys know where they need to be and how they need to get there. That has definitely been the focus so far, so I’m interested in seeing if the emphasis on full contact moves at all, as the players gain more of an understanding of the concepts they’re being taught. You definitely wouldn’t mistake a Helton practice for a Carroll practice, but I don’t have any issues with what we’ve seen this spring.

Q: One encouraging thing I’ve heard from DL is that many of them lost weight/fat and gained strength and quickness from last season. Some of the younger OL said they’ve added weight/muscle but have kept their quickness. Can you see these improvements in our DL and OL in their physical appearance or on-field performance?

A: I don’t think I see any bad bodies along either line right now, which isn’t usually the case for a college football team. The defensive linemen all look like they’ve gained a step, but it could also be coach Chad Kauha’aha’a’s insistence on them playing across the line of scrimmage. I don’t 100 percent buy the idea that last year would have gone better if the players were just stronger or bigger, so I don’t know if gaining some muscle or toning up is going to be the cure that solid coaching and proficient schemes will be. That being said, I think it’s a so far, so good in terms of the results of the winter conditioning sessions.

Q: Has there been a progress made on finding a new media outlet for radio football and basketball broadcasts .. I feel leaving 710 is probably a mistake

A: I haven’t heard anything confirmed on a new home for radio, but I do think there’s an argument that leaving at this point was in the best interest of USC athletics. It was going to be tough having to fight for time after the Rams and Lakers, moving forward, and I believe the USC football team was bumped from 710 at least twice this past season. I think they’ll settle somewhere they are the clear “A” sports draw and can build a significant presence there.

Q: USC Football has traditionally recruited great players from High Schools in NJ. I am certain Mr. Katz can list them all. The last time Trojan football played in the Northeast was several years ago @BC. It appears to me they are not scheduling in my neighborhood because they have diminished interest in recruitment of northeast coast players. When is the next scheduled football contest for USC in the northeast?

A: There are no games on the future schedules in that area of the country at this point. You have to go back to the 2016 class in Cary Angeline (Exton, Penn./Downington East) to find a USC signee from the northeast area. Then back to the 2013 class, with the two Maryland guys in Kenny Bigelow and Khaliel Rodgers. There are a couple of big time prospect in the 2020 class from Maryland, and USC just had a 2021 prospect from DeMatha Catholic on campus last week.

Q: It looks like staying healthy is going to be key to our success this year. Aside from depth issues in the secondary, what other positions do you think we are going to be thin, even with kids coming this summer?

A: It’s a full roster right now, so there isn’t really a spot that looks as thin as the secondary does right now during the spring. But the answer is definitely the offensive line. There is no experience beyond just a few projected starters and there might be some young guys asked to seriously step up if the Trojans get a few bad breaks in terms of injuries.

Q: My question has to do with the transfer portal. How does that affect the recruiting numbers for this year?

A: When you sign a player out of the transfer portal—regular transfer or graduate transfer—it’s just like signing a player on signing day. They count as an initial counter and they count against your total scholarship number. So if USC brings in a transfer, it will count against the 25 allowed in the 2019 class, and against the 85 allowed for the season.

Q: There’s been a lot of good press on Jay Tufele. I’m curious to know how is fellow DL men are doing, like Connor Murphy, Marlon Tuipoluto, Brandon Pili, and any others you’d like to comment on. Can you also give your take on Trevor Trout ( I realize he is out w/an injury, but do you think he’ll be in the rotation this year?)

A: I really like what we’ve seen from pretty much every defensive lineman this spring. Tuipulotu and Brandon Pili have both been terrific. Connor Murphy (photo above) and Jacob Lichtenstein have taken steps forward. Christian Rector has been dominant at times. And the newcomers in Drake Jackson and Nick Figueroa already look like veterans. I’m as bummed about Trout’s injury as anything that has happened this spring. I thought this was going to be a really important time for him. I didn’t think he was going to push those interior guys for a starting spot, but this spring had a chance to set the tone for him to get comfortable playing with those older guys and potentially grab a spot in the rotation. We’ll see how quickly he can get things going this summer and fall, but after not seeing him much this spring, I’m not ready to say he’ll be a significant contributor this fall. That’s not to say I’m ruling it out though. He’s a talent, and we’ve seen those interior guys ahead of him nicked up before.