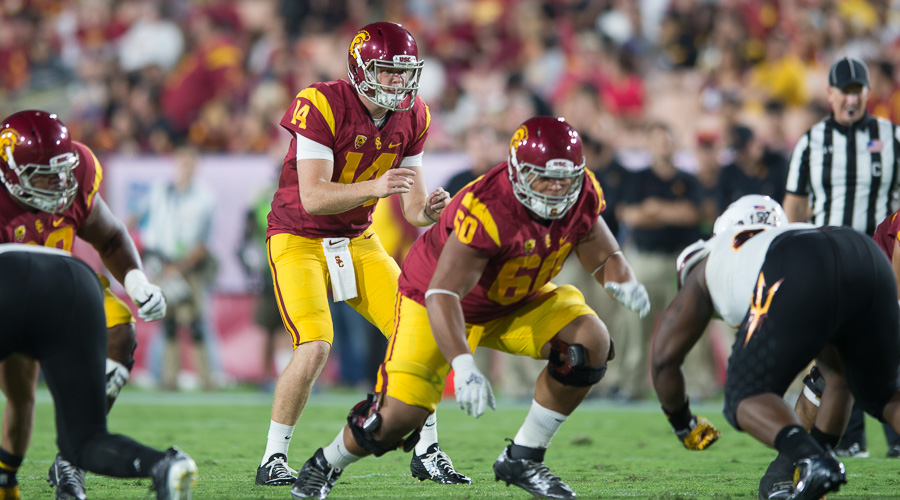 In this week’s edition of the mailbag we discuss Rose Bowl practices, recruiting, the offensive line and more:

What is the consensus opinion on the USC O-line this season? Was it a case of a bunch of 3rd and 4th year guys finally coming into their own on their own or was it a case of new O-Line Coach Callaway making a difference in their development?

A combination of both. It’s pretty clear as we’re looking at the year in review that Callaway had a big impact in how things developed on the line but he also had a veteran group to work with and that has to be taken into account. We’ve talked a lot on the board about how this team is similar to 2002 and that applies to the offensive line, in 2002 it was a case of Jacob Rogers, Lenny Vandermade, Norm Katnik and Eric Torres needing to come together in order to support Carson Palmer and the offense, and they did. And no matter how well Sam Darnold, JuJu, Ronald Jones and the others on offense played it wouldn’t have worked unless the line came together the way that they did as well.

No indication of anything yet but you never know what could happen after the bowl game. There is really good chemistry on the staff with guys that were primarily handpicked by Helton so that would be one sign toward things staying intact while the program is on an upswing.

Do we get Darnay Holmes and do we get Wyatt Davis. I really haven’t heard too much about either player besides your recruiting podcast. Also, who will be the biggest recruiting surprise, (it can be either a commit or decommit.) Thanks!!

Nothing clear on either guy right now but they are two of the most high-profile recruits on the board. My read on Holmes is that he knows the type of talent that is at USC and what could be possible in that environment, and he likes what the Trojans have done with Adoree’ Jackson since he considers himself a similar talent. One issue for Holmes is that there isn’t a consensus within his family about his choice yet and other schools are still legitimately in the mix. For Davis, it remains to be seen if he will flip to SC but Wyatt has done enough poking around on the possibility to think it’s something he’s definitely considering. I will put Wyatt down as my biggest recruiting surprise if it happens because he was the most dominant offensive lineman I saw this year.

What aspects of the PSU game will provide the greatest challenge(s) for our team? Going into this game, do you see our team underestimating the competitive fight in our upcoming opponent?

I don’t see this Trojan team underestimating anything about Penn State. Helton has placed a priority on maintaining the normal work schedule of a game week to help keep the players focused on their regular preparation, and it’s a formula that has worked pretty well through the year. But I do think one of the biggest challenges for both teams is continuing the momentum that they carried with long win streaks. That’s not always an easy thing to do with the long break between games.

Garry what happened to the CIF? From the Anaheim vs Downey game the CIF seems to be on destruction path. We now have division championships followed by Bowl Games? I mean WTF? Why do we even TRY to anoint a champion in a state with 5000 high schools?

If you’re going to try and have a true state championship in California I think you would need to do away with the section championships and simply have the entire playoff system be a bracket for the state. And to be clear, I don’t think that will happen anytime soon because the section administrators aren’t in any hurry to give up the section championships. Ironically, I thought the most recent change in the Southern Section this past season to Div 1, Div 2, etc was a very good one. I didn’t like the idea at first but I thought it provided some very competitive playoff games.

Garry: Connor Rossow, freshman walk on… from Mater Dei, 6’2″ 305. Is there a chance he has a future contributing to the DL? Has he started to develop under CKU?

Connor has sat out basically the whole year with a shoulder injury so we really haven’t seen him do much.

Has anyone talked about silent commits yet?

Garry: Are the RB practices uptempo and physically both conditioning and starting to get the hitting going on (i.e. blocking, tackling, hard running)? My concern is the guys will gravitate to Carl’s Jr. or better still In-n-Out and pack on a few and then we play slow. Also concerned about penalties in particular motion and formation. I know I’m a pain about this stuff but if we practice hard for a tough football game against a tough team we win; if we fool around who knows.

We saw a step up this week in the practices Kevin with the hitting, and there has definitely been a bounce in the step of the players with the tempo in all the bowl practices so far. You don’t sense any kind of malaise or holiday hangover at all. One guy clearly ready to go is Cameron Smith, he leveled freshman receiver Trevon Sidney yesterday coming across the middle after Sidney had dropped a pass. We saw something similar prior to the Notre Dame game when Cameron had a huge hit on Tyler Vaughns, a good sign that #35 is dialed in.

Will Jake Olsen suit up for the Rose Bowl?

As far as I know. All team members dress for the Rose Bowl so I don’t know of any reason why Jake wouldn’t.