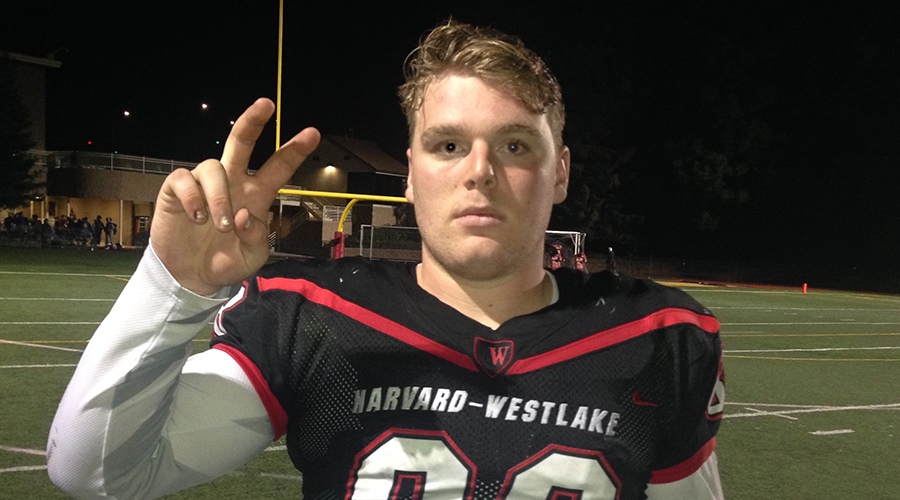 Jim Steele
Is there a limit on the number of players who can travel with the team to the bowl game, like with regular away games, or can the entire team go?

No limit, the entire team is available to go.

onajetplane
What surprised you the most from Wednesday signings?

I don’t think there was anything that was a huge surprise. Helton had said we would sign about half the class, and with the projected number around 18 it made sense to hear that there were 9 letters received (only 8 announced so far). I guess one small surprise would be the fact that Jackson Carman chose Clemson, if he wasn’t coming here I thought for sure he would stay home with the Buckeyes but that’s the kind of kid you get when you’re the defending national champs.

TrojanInSF
Garry, what is your best guess on 1) JT Daniels reclassifying, and/or 2) Sam Darnold going pro? Do you think JT’s decision is dependent on Sam’s? And if neither happens, do you think we push to sign a QB on NSD or roll the dice at QB next season with Fink, Sears, and JG in emergencies?

I still think JT reclassifying is a possibility but I don’t think it’s tied to any decision by Sam. And I have no idea on Sam’s thinking right now. I understand the reasons for leaving, the many millions of reasons, but I also think Sam is one of those guys who is pretty content with life right now as the USC quarterback, and the team will be loaded next year. Is that enough to stay? We’ll see. There has been talk of a potential grad transfer if needed, Wilton Speights from Michigan was mentioned.

norcal4socal
Garry this coaching staff is outstandingly doing the work, especially the last 2 months. To what degree will or has the early signing period been an obstacle in preparing SC for the Cotton Bowl?

I think it will be real interesting to look back at how this signing period impacted things, and so far the one thing Helton has talked about it the extra trips for in-home visits at a time when you’re also conducting bowl practices, “it’s made for some pretty tired coaches”.

norcal4socal
Garry, do you know what festivities the Cotton Bowl committee will sponsor for the Trojans and Buckeyes while in Dallas? Having PAC 12 and BIG 10 champs represented, its too bad the game wasn’t in the Rose Bowl. I always thought going to Lawry’s during the week sounded special.

On Tuesday there will be a Boots & Bling Theme Party. Wednesday is a visit to a children’s hospital and then a Denim and Diamonds Bash that night at the team hotel. Thursday is a luncheon with both teams, and also a Battle of the Bands fan event at Klyde Warren Park from 3-4.

USCTrojan1990
Garry, this is shaping up to the one of the best classes for USC since the PC days. I have heard that a lot of that has to do with Helton. Why do you think he is having so much success this year? Other than winning 20 of his last 22 games of course.

His genuine approach in recruiting has resonated as a head coach. He communicates well with recruits and their families and, as you mention, it doesn’t hurt to have a Rose Bowl and Pac-12 title to point to on your early resume.

rose green
Will Stephen Carr be utilized more vs Ohio State, as they are very strong against the run; this will limit Ronald Jones. Is Carr the most under utilized Player in the country? [see first game this year of Stanford vs USC]

Stephen is healthy again after missing several games with a foot injury so it’s hard to say he’s being underutilized when it was an injury that limited his time. And while Stephen is available for more right now we’ve also seen Ronald Jones go on an impressive streak of 100-yard games to close the season so he’s the one the team is going to ride right now.

SC93er
I want to ask you about the two Hawkins High guys Lewis and Johnson. Are they both participating in bowl practices, and if so, how do they look? With Burnett, Vaughns and Pittman emerging as likely starters for next season, where does Lewis fit in the WR rotation? And what are Johnson’s chances to compete for meaningful playing time in what looks to be a crowded secondary?

Lewis is out there but Johnson will not be back until spring. For Joseph, the depth chart is going to be just as crowded in spring as it was this fall so it’s a matter of seeing where he takes his game. He showed flashes in a true freshman year including on special teams and he can be a real physical player with his size but he’s still going to be battling Vaughns, Pittman, Greene, Josh Imatorbhebhe and Randal Grimes on the outside, with Deontay Burnett likely moving back to the slot. With Johnson, I think there’s a real opportunity in spring at corner. He showed an aggressive style before getting hurt and was making progress toward early playing time. There’s no reason to think he can’t get in the rotation with a solid showing in spring and work toward more in the fall.

TommyT
Garry, once early signing period is over, how does USC reset its board? Who gets offers and what positions get extra attention?

I thought the new offer Wednesday to Oregon-commit LB Eli’jah Winston was interesting, especially with Solomon Tuliaupupu still on the board. I’m sure we will see more new offers based on who didn’t sign but the coaches also have a pretty good focus on how to fill the remaining spots. Penei Sewell will get a lot of attention, would love to have him as a 3rd OL commit. Amon-Ra St. Brown is a priority and could end up being the only WR commit, if he comes. We mentioned Solomon, he’s very much a priority still. And there is work to be done in the secondary still. Can we take 3 corners? Marcus Johnson has been a longtime verbal, will he stick?

Fourthseed
Garry, this new early signing period has me confused! (easy to do!) How many of the guys we expected to sign today did we sign? Any surprises, good or bad, today? How many scholarships to we have left to fill on NSD? Besides the WR from Mater Dei and the corner from Helix, who is MUST HAVE that’s left?

We hit right at our mark based upon what we were hearing leading into the day. Helton said he expected to sign 50% of the class, and that would mean 9 guys based upon an eventual number of 18. We announced 8, and there will likely be one more. I had also heard 5 early enrollees so don’t be surprised if the 9th announcement will be here for spring. That would mean 9 rides left to go (3 of those spots are verbally committed to by Letuligasenoa, Trout and Marcus Johnson) and remaining must-have’s would include Amon-Ra St. Brown and Solomon Tuliaupupu from Mater Dei, along with CB’s Isaac-Taylor Stuart and Olaijah Griffin, plus I also want Caleb Tremblay and Talanoa Hufanga to be accounted for as well.

cheparro
Gary … What are the coaches saying about why some of the committed recruits didn’t sign today? i.e. Tuli, Trout. Is it fair to assume that anyone who was committed and didn’t sign, is, at best, a soft verbal with a strong likelihood they’ll up elsewhere?

I understand the thought of saying if a kid didn’t sign then he isn’t a solid commit but we haven’t heard anything that would indicate an issue with Tuli or Trout. They are both expected to be fall arrivals so there was no pressing need to sign now (although it would have been nice).

desertfoxx
Gary
Looking at recruiting from a distance like myself I see us falling short in one area. The ability to in numbers recruit elite offensive line talent. Isn’t it a reach when are top to prospects are from out of state yet local talent from Bosco and Mater Dei go to OSU or Alabama ..this year we win a PAC-12 title without one lineman making all league and other tha Vorhees and Jackson three years from now not one lineman who will play on Sunday. To me this is the one missing link to be a top 5 team every year .. talent is great at all other positions.Your thoughts. Merry Christmas and Fight On in the Cotton Bowl.

I agree with the importance of a dominant OL. I thought the staff did a really good job last year with the 5 OL recruits we brought in and they form a nice foundation moving forward because all 5 can play (you mention two of them with Sunday futures). I don’t think we will see 5 in this class, primarily due to limited numbers, but I am hoping we see 3 and that means there is work to do. Penei Sewell is now the obvious first choice to add to Justin Dedich and Liam Douglass (photo above) but who else is available now that the signing period is over? It will be interesting to see if any new names emerge.

TroyBoy
GP – who’s the 9th commit (Trembly?) and when will it be announced? Is St Brown a sure commit or is ND still in play? Thoughts on Rasheem and Sam staying or leaving and impact on recruiting …

The common thought is either Tremblay or Hufanga Talanoa, as both players will be spring enrollees. Tremblay can announce for a school at any time during the JC signing period, while Talanoa is expected to make his announcement on December 28th. As for Amon-Ra I think ND is the primary option other than USC but at this point I like our chances. I can see Rasheem and Sam decisions going either way, and if Rasheem does go that makes Tremblay all the more important of a recruit.