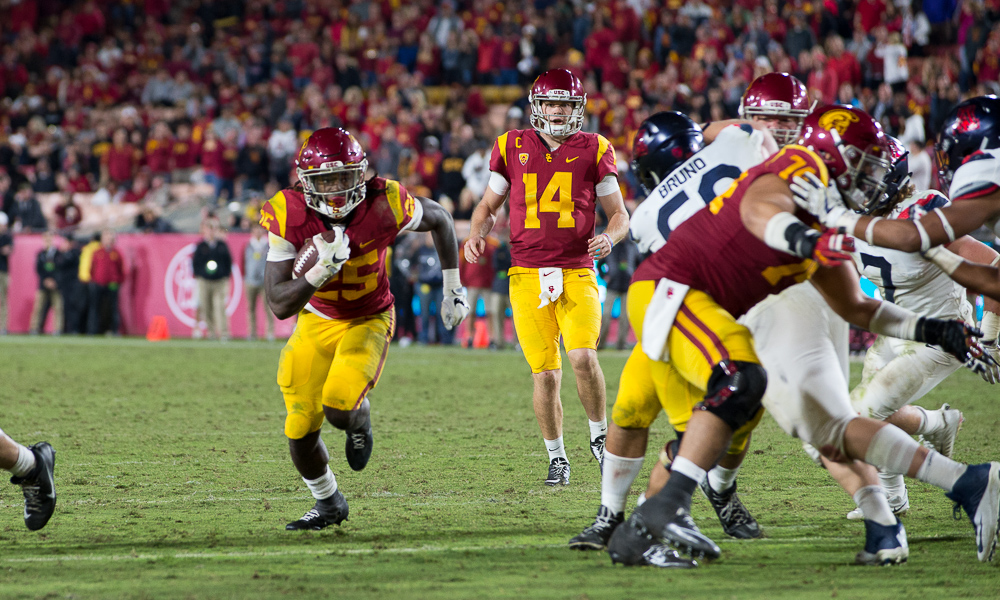 The last two meetings between USC and Colorado have been pretty close, with the Trojans coming out on top both times. I think that if USC gets RoJo and Ware going early, like last week, I like our chances. Does RoJo run for 190 plus yards for the third consecutive game?

That would be my recipe for success, to run the ball consistently against a rush defense that simply isn’t very good. The Trojans have run for over 300 yards the last two weeks, and I think that’s a good target this week as well. And yes, I can see RoJo approaching that mark, this week and next week.

Mts344
Haven’t heard much on the play of Pili, how did he do and some of the other younger players do on their assignments from Arizona? Seems like Iosefa had a break out game. If the game goes as we hope, will we see Fink in the game earlier to give Sam a breather?

You had to be pleased with what younger guys like Pili, Iosefa and Langley did on their assignments last week. I like what we’re seeing from Brandon as he gets used to being in the line-up. He moves so well for his size and brings a physical strength element that not many guys can bring, very bright future. I agree on Jordan too, his first game starting at OLB and it’s against Khalil Tate, and he did well. Would like to see him stay at OLB and see where that goes. I do think we see reserves like Fink if the game is in hand.

Rodgarnay51
Garry, I noticed that the spread on the CO game is 13.5. That seems like SC’s first easy cover of the year. Yes CO still has a lot of familiar names on offense and Lindsay can be a handful, but I think unless SC comes out really flat or makes a lot of mistakes, they should trounce the Buffs. What’s your take on this game? There’s no way SC will lose, IMO, but could it be close? Or will SC administer the thrashing I’m anticipating? (No, I’m not betting on the game; I just think SC is a lot better and has more to play for.) Thanks Garry.

I’m with you in that I just don’t see this game being a real close one. As far as the spread though, you never know what happens if SC gets a lead, puts in some reserves and there are some late scores. Helton was pumping up Colorado yesterday in his press conference, talking in coach-speak about their close losses, the fact that it’s senior night and they are playing to become bowl-eligible. I get all that but USC has the conference title game in their sights, and after all this team has been through this year I think they go out and close the deal in fine fashion.

TrojaninArkansas
Could you give us an idea of who you think will declare early for the NFL draft? Would be nice to get guys back like Rasheem, Porter, Cam, Biggie, Tell, Sam, Rojo, Burnett and so on. Maybe anything you are hearing around campus or just your opinion on who would benefit from coming back. Thanks!

Really not hearing too many rumblings but the topic was discussed among some of the media watching practice on Wednesday and here were the general thoughts. Darnold could go either way. RoJo probably gone, a RB only has so many carries and he’s given us three good years. Burnett stays. Porter probably stays, primarily due to injuries limiting him so much this year. Rasheem, I can see that one going either way and I’ll understand if he leaves, he’s ready. Cam could go, he’s proven himself here for 3 years. Biggie has the skills to get drafted somewhere but he could benefit from coming back. I think Tell comes back.

SC93er
Garry, I’m going to jump ahead and assume we clinch the P12 South this Saturday. Who do you rest against UCLA? Do you approach it like some NFL teams when they secure a playoff spot early — rest virtually all of the starters, including your QB? Or does the sight of powder blue make you want to go all Barry Switzer and hang half a hundred on them sons-a-bitches, regardless of injury risk and any aches and pains with your starters?

I’m certainly in favor of hanging half a hundred on the Bruins whenever possible. In terms of resting starters, we’ve never really seen Helton in that scenario but I would be surprised if he changes the rotation too much. He might get some guys out of there earlier than normal if a big lead comes into play but my guess is he wouldn’t want to mess with the early rotation too much, especially now that the Trojans seem to have some rhythm lately.

How much of a chance does Johnston get, starting this week over Chuma?
How is Toa’s knee? Will Jackson start in his place?

Based on what we saw in practice (or didn’t see in terms of Toa or Chuma) I think there’s a good chance Jackson and Johnston will get the starts or at least play a lot. The Trojans should be fine in that regard as Colorado is giving up 200 yards per game on the ground with one of the worst rushing defenses in the country, and USC has been running the ball very well lately.

rose green
What is the status of Stephen Carr? Why didn’t he play vs Arizona [ only played 2 plays, I think]?

Carr is pretty much ready to go this week. There was a little rust last week so his role was limited, and Aca’Cedric Ware ended up doing a great job as the #2 guy to RoJo. My guess is we see Carr more in this game.

eliminator207
With Chase having a groin injury, how does the staff feel about Budrovich as a viable field goal kicker and place kicker? Is Chase going to continue to kick extra points? Is he going to kick short field goals?

Budrovich will handle kickoffs and McGrath will continue with field goals and extra points. Helton sounded very confident in Budrovich doing kickoffs (he was a very good placekicker in high school) but he did say there might be some limits on McGrath with longer field goals, so that’s a decision Helton will have to make at the time.

motovich
I. Langley seems like he’s done a surprisingly great job as a coverage corner replacing the injured Marshall. A lot of times he’s left in single coverage and seems to hold his own. Any opinions on his play the last 2-3 games?

Langley is playing very well, particularly in man coverage, which is a staple of Clancy’s defense for corners. I think he’s made the most of his opportunity so far and given his coaches (and teammates) the confidence to have him out there.

Fourthseed
Garry, this is a bit more of a rant than a question, but one of the really big things that irks me so much about these stupid late start times (besides getting back to SD at 3am!) is the disrespect it shows to our team. Even after a decent first half last Saturday half the Coliseum emptied out just because of how late it was. Our players played to an empty house in the second half. Can’t USC exercise some clout and say, “FU, we’re not starting at 7:45pm!” There is no west coast football without USC, we’ve got to start taking advantage of our position!

I couldn’t agree more about USC using some leverage within the conference. No Thursday night games at the Coliseum, no 11am start times and no 7:45 start times. I don’t think there is anything wrong with some strong negotiating on those points, and remind the conference to check their top rated games to see how many times USC is on the list.

rose green
Khalil Tate was second string Qb a month ago: is that because
1. Brandon Dawkins [first string] was even better Qb or
2. Coach Rodriquez doesn’t know how to judge talent?

Option 3 is that Tate was hurt with a shoulder early in the year and didn’t practice at full strength until the Colorado week.

BOULDER TO BIRMINGHAM
Garry, using your best judgement, give your thoughts on the availability for the next two games on the following players:

pgoodman
Gary it seems lately like every year we loose a game by 3 points we should have one. Think Washington St this year. That one game crushes us in the CFP rankings..Could I get your take

It’s hard to go undefeated. I don’t want to oversimplify it but that’s why it seems as if there is annually one of those games where you slip up and have a loss that you probably shouldn’t have. The Carroll teams can certainly point to games against Oregon State, or the 13-9 result against UCLA, that kept them out of national title games, and they really should have won each of them.

Have you signed up for a WeAreSC membership? Support the site by donating today and helping to maintain the level of content and coverage of the Trojans.