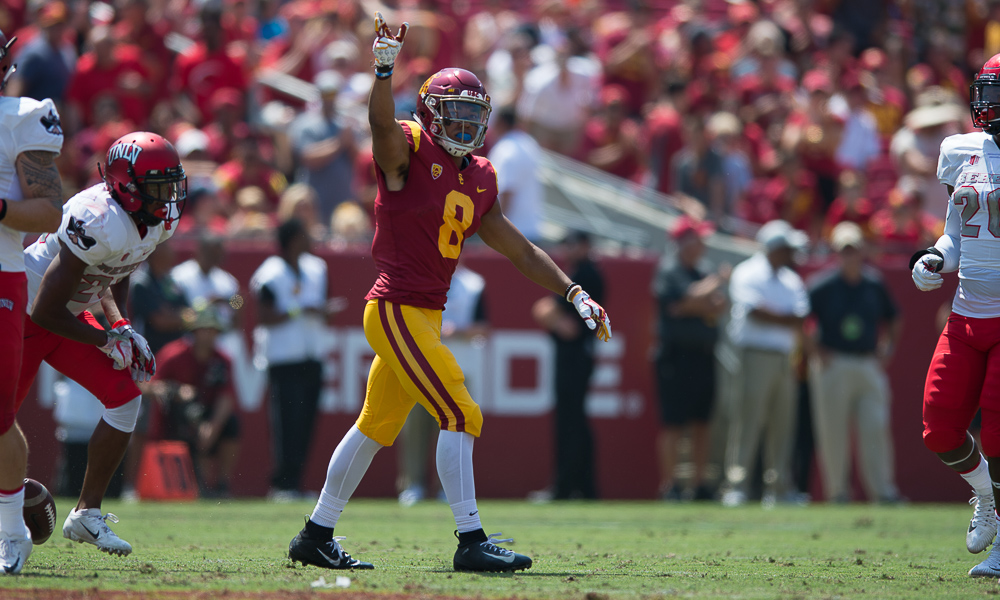 Garry – How do the SC WRs matchup against the Cal DBs?

I would prefer it if Michael Pittman were available but there should be plenty with Vaughns, Amon-Ra, Velus and Devon Williams, especially if we can follow a similar game plan to last week where we are leaning more on the run game. The top two players in the Cal secondary are safeties Ashtyn Davis and Jaylinn Hawkins.

We will find out. I actually think this is one of my favorite parts of the match-up because I’ve got respect for Wilcox as a defensive coach but I’m pretty encouraged by what we saw from Helton last week with his play calling. I would hope that we continue to lean on the run game more as Drevno continues to work with the offensive line.

This year’s recruiting feels different from others. USC has started slow in recent classes but always finished strong. However, the record and play this year seems to be affecting the current class. If Helton stays, will recruiting turn out well or will it remain underwhelming?

I think we’ve got a pretty solid base in areas like RB, WR, TE and LB but the success of the class will be determined by how we finish on the lines and in the secondary. I’m not trying to sugarcoat it, there is definitely work to be done in those areas.

Hi Gary-
Last week, with Clay calling plays, we saw a lot of run emphasis which fans have been calling for all year to take some heat off of JT. In the coming weeks, do you think we will also see some more th rows and plays designed for our TEs? Falo leads all TEs with 8 receptions, from a position group that seems woefully underused. Thoughts?

I doubt we will start to see some huge increase in throws to the tight ends, we saw 3 catches for Falo in one game recently and that is probably as much as we will see. I’ve pretty much accepted that this year as a reality if Daniel Imatorbhebhe is not going to be available.

GarryP-any news on recruits being interested in USC since the coaching shakeup?

The biggest news I’ve taken this week is the fact that Chris Steele is still in play. We badly need corners and he’s a good one, would love to see him brought back in the fold (and bring his Bosco teammate Trent McDuffie with him).

It was great to see, wasn’t it? I’m encouraged by what we might see with Drevno coaching the way up front and I’ll say very hopeful that Helton will continue to build on it.

Garry, to relieve Mal-Ware will Helton call on Ben Easington with Carr now sidelined or will he summon Steppe for his second appearance?

Helton said this week that he talked to Stepp about using him for the four-game limit but that they will not burn the redshirt year. I’m very much looking forward to seeing Markese get a chance to show what he cab do, he’s a bruiser.

Garry, How stoked are you and JJ to be coming to San Diego next week for your annual appearance? See you on the 15th.

Fight On! Beat the Bears!

Can’t wait! Look forward to it as always.

With Wilcox knowing USC so well, do you anticipate Helton using Jack Sears this Saturday to keep Cal defense off balance?

If Sears does not play against Cal do you anticipate him playing at all during the remainder of the season?

I thought we might see some packages for Jack against Oregon State considering how well he had played the previous week but, since we didn’t, my guess is we won’t see him this week either. I understand your thought about it being a look that Wilcox has not seen before but he doesn’t know Daniels either.

I realize they have a lot on their plates right now, but does the Board of Trustees have some kind of mission statement or clearly stated expectation of the football program and/or athletics in general?

I have never seen one.

Garry
Hate keep beating a dead horse but in my opinion the talent level on this roster is not what most people on this web site think it is
… in your opinion can you name any first round picks on this team regardless of clas
.. I do not see one
As an example 1979 offense had six first round picks alone
To me the talent level is just not there and we have either whiffed on a bunch of recruits or coaches have done a terrible job of player development
Your thoughts sir

My thoughts would be mostly on younger players. I think you would have to include J.T. Daniels. Anytime a kid is national player of the year as a junior and a starter as a true freshman there is that kind of potential. Others could include Amon-Ra, Tufele, Palaie, Solomon, Hufanga, etc.

Thanks always a great job, you make it look as easy as getting the ball from the OC to the QB.
Just want your input on a “the program is about to turn the corner because……” Theory. From an always optimistic homer.
Is the program, including the coaches, still feeling the effects of the lost scholarships. When PC was coach, best man played week by week, maybe even day by day. So to keep your position you had to work hard. To take one you had to work harder. Obviously, with less scholarships less competition. It didn’t effect the program as soon as I thought it would because of holdovers, I guess, but they also had to tone down practices i thought because of depth, and CH was there for that. I mean I thought Mama, Viane, and Toa were gonna destroy defenses. But they didn’t have to compete everyday to be better than the next man up. Wasn’t one. They didn’t get “sharpened”. Not picking on the OL, look at DB, #8 said he is really going to take this year serious. Cam could even be better if EA was pushing for his spot.
All that for this I guess. Could that gap of stolen scholarships be the root cause of our physicality and toughness issues? I also believe it effected the coaching.. But now that time has passed and players and “culture” will have cycled through can we get back to Trojan football? Or Do we have to blow it all up and bring in another coach so he can take credit for all the mess CH had to deal with and is still being sorted out, well at least the new coach will win us a rose bowl and Pac 12 title finally!

There is a lot of merit to these thoughts. Yes, you cannot underestimate the many ways in which the reduced scholarships impacted us for a long time but this year I really feel like we are past them. And as referenced in the previous question I feel like some of our younger talent is capable of providing a real challenge for playing time similar to what we saw in the early Carroll years. Would we have seen a Jalen McKenzie or a Brett Neilon given more of a shot under Pete ahead of some more veteran players like Chuma or Toa? I still think Toa is one of our best 5 OL but would he be at another spot? We saw Olaijah Griffin getting in position to really challenge Langley before getting hurt, and Talanoa proved that he was ready once he got his shot. If Clay stays as coach and continues to bring in this kind of young talent it will be interesting to see if they get more of an opportunity to compete right away for time.

In terms of the on-the-field product, is the USC football program in better shape right now than it was the day Lane Kiffin got tarmac’d?

I would say yes primarily because of what both sides of the line look like for next year. The skill players are probably somewhat similar to the Kiffin days with a lot of good ones but I am pretty optimistic about what both lines can look like. My guess is the OL will basically be the 5 members of the 2017 recruiting class and I’m just fine with that, and I think the 2017 DL class will provide the base on that side of the ball as well. Add in guys like a senior Christian Rector, Trevor Trout and Caleb Tremblay and we could be strong on the DL.

Hi Garry — This question may be a little repetitive but if JT struggles against a stout Cal defense, what are the chances Clay pulls him and gives Sears a shot? Obviously if this were to happen, you’d want Jack to have at least the 2nd half to get it going. Would Helton be willing to make this change?

I think the bar would be pretty high for Helton to make the switch. Daniels is his QB and Clay hasn’t shown an itchy finger so far on making any changes.

Had high hopes for LB Levi Jones and OL Justin Dedich, who were both top national recruits, but both ended up doing little this year. I know Levi played a little and was injured and Dedich is probably targeted for a redshirt. What’s the future outlook for these two? Hopefully the loser of the Neilon-Dedich center battle gets a long look at OG– we desperately need the tough, nasty road graders.

I hear you on Levi, he’s one that I’m surprised hasn’t found a way to make more of an impact so far in his career. On Dedich, yeah, give him time. He’s behind a senior captain and another good one in Neilon, let’s see what happens next year because I like what I’ve seen from Justin so far.

Has Drevno moved any players or given more reps to backups. Any sign he is reevaluating who starts?

I don’t anticipate any movement but, if anything were to happen, I would look on the right side of the line with Vera-Tucker and McKenzie. Both of those guys are ready to go.

What is the status of the safeties and CBs? With all the injuries and the like
it is hard to keep track.

I think we see either Biggie or Griffin at one corner spot, Lockett in the slot and probably Langley at the other spot. Ajene is likely at safety along with Tell. Like you say, lots of movement back there right now out of necessity and availability.

Can you post a list of all the players by position that we expected to have this year but are currently “out” — including people lost for other reasons than injury? Like Tayler Katoa who is on a mission, or players like Jack Jones who were lost for academic or other reasons.

I think that list would be eye opening. I want to say we have about 6 linebackers out — but I might be off.