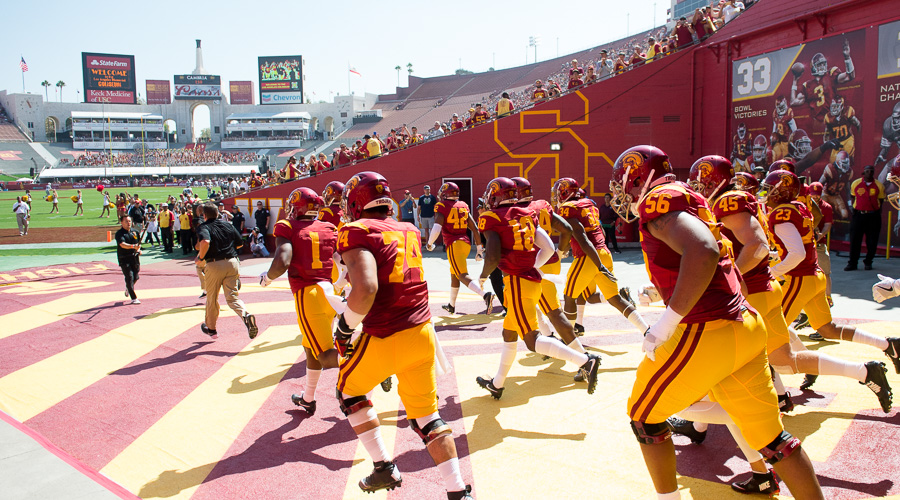 In this week’s edition of the mailbag we look at the Trojans use of the tight ends, the next man up at running back, Coliseum attendance and more:

The past few games have been fun to watch and many fans are now much more optimistic than after the first four games. In your honest appraisal is this more about the staff settling in and we are playing well or more about the level of competition?

I don’t think we have a clear answer to that question. I think there’s been genuine progress in all three phases of the game for the Trojans, and that goes for both coaches and players, but you can’t ignore the reality of the opponents that have been faced in recent weeks as being a factor. For instance, three of the defenses that USC faced in the month of October were ranked #108, #123 and #125 in the nation. As much as I’m loving what we’re seeing from Sam Darnold and the offense you have to take those numbers into account. The good news this week is the Oregon defense is ranked #127.

We saw the limited use of the TE with some nice passes to Imator for a TD and a nice impromptu, scrambling pass to Petite a couple games ago, but not seeing them targeted much with any consistency. Do you think we’re once again missing an opportunity to complete some easier passes, spread the ball, keep defenses honest to cover whole field and help our future TE recruiting by incorporating them more? With all the mention of Cal being down on Safeties and having to use a previous QB there…would have been the perfect game to showcase the TE’s…but I didn’t see it. Can’t understand why they’re not used more…bootlegs, 7 yard stops, pop-passes up the middle etc.?

I would also like to see the tight end used more (3-4 passes per game would be great) but I’m not going to call it a missed opportunity, not when the offense is averaging almost 570 yards over the last 4 games (and it’s not like the TE spot is being ignored with 5 TD passes in those 4 games).

I am still mad Freeman went to Oregon and did not come to USC. Is he the best running back USC has faced or will face this year in your opinion?

I’m still going to put Christian McCaffrey as the best RB we will face this year. McCaffrey may not be putting up the huge numbers that many projected for him but he’s still averaging over 110 rushing yards and 3 catches per game. Freeman would be next on my list.

Does Toland get called if RoJo needs a breather? SC must pound the ball.

Dominic Davis would be “next man up” if needed but Toland would be in line after that, according to Helton this week. It would be nice to see Toland get an opportunity after what he’s shown on the practice field.

Why is USC struggling to fill up the Coli?

There are a few factors. I think the 1-3 start played a role, especially when the first home game was at 11am against Utah State. There has also been a Thursday night game, a Saturday afternoon game in the heat and then a pair of 7:30 games as well. I also don’t think you can dismiss some fan fatigue with the state of the program, coaching turnover, the Coliseum renovations, etc. All of that has played a part in crowds that have been announced in the 60’s but that number reflects tickets sold, not bodies in seats. At the end of the day, playing good football is the best formula to cure any issues. If good football is being played then the fans will come, and when the fans fill the Coliseum the atmosphere is as good as any in sports.

Please post the list of official and unofficial visitors this weekend as you become aware of them. Also provide your best guess as to who of the uncommitted visitors that we have our best chance of receiving a commitment. Thanks

We haven’t heard of any official visitors, that’s something this staff doesn’t do a lot of for in-season home games (although we may see some for Notre Dame). There should be plenty of unofficial visitors though and USC verbal wide receiver Marlon Williams is one who plans on making the trip to the Coliseum for the game. We will post a list after the game on the Recruiting Board of the recruits who were there (Cal game list) and I can do a “best guess” at that point of Trojan chances on the uncommitted guys.

What would it take to get Jake Olsen into the game to short snap in a home game this season?

The first guess is that the Trojans would need to have a large lead late in the game, similar to when most other deep reserves would be used. I think it would be a real special moment and I hope Helton makes it happen.

In your humble opinion, what will it take to for Jacob Daniels to get more playing time?

Will Jalen Green be moved back to QB to provide quality depth behind Darnold for the 2017 season?

Right now we’re not seeing Jacob making any kind of move on the practice field for more playing time so I don’t see it happening any time soon. Christian Rector is the reserve who seems to be making that kind of push along the interior. As for Jalen, I think that’s a huge question. Depth-chart wise for the Trojans it would make a ton of sense to move him back to QB, and I think he would be pretty good in this system if he stuck there full-time. But he would be moving in order to be a back-up to Sam, whereas if he stayed at WR he would be in the rotation and developing at that position. It will be a very interesting situation to watch.