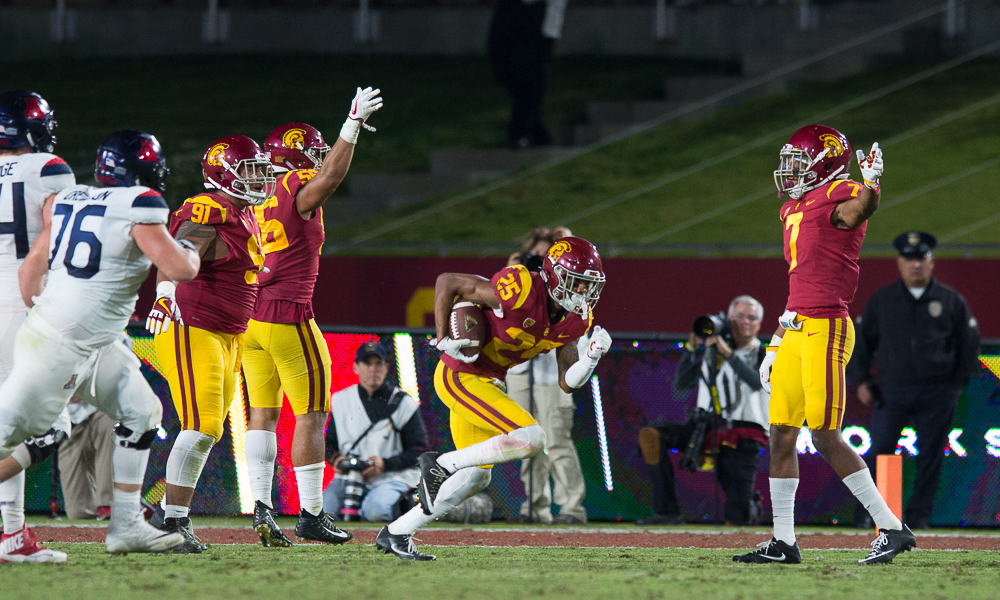 901 Club
Who should we want to play, WSU or Stanford? If Stanford beats ND would your answer be the same?

No matter what I want to play Washington State. I think we match up well with them as long as we don’t lose three starters along the offensive line during the game.

redeye
Who is your early pick to replace Jim Mora Jr?

Sure seems like Chip Kelly is the target and there are indications they may be able to afford him if alum Casey Wasserman decides he has seen enough from the Bruin program.

Rodgarnay51
I watched the Budrovich kickoff play over and over again today. I could watch it 100 more times and Ross would still be seen giving it the full matador treatment. He appears to even pull his arms out of the way. The other thing that’s interesting about it is after Budrovich lays the hit on the guy and his teammates are jumping up and down with excitement, Ross just walks off the field and never even looks at the celebration. Strange. Should anything be read into that? Ross has definitely had his playing time reduced. I wonder what’s up?

Yeah, not a good look for Ykili from the TV camera angle on that play. I haven’t heard of anything going on lately with him.

Rigged4fun
What was the key to calling the fake punt return against UCLA? I realize special teams coach John Baxter had seen something in the films that gave him the idea, but what tipped off Baxter to call it?

Here is how Helton described it during the Trojans Live show: “Coach Baxter had come into my office Tuesday night, and he’s a cowboy by trade, so when he says “calf rope” that means he’s got you. He came into my office about 11:00 at night and said “calf rope coach, we got em”. It takes some tendencies, basically you’re a placement punting team which means when you’re on the hash you’re going to place the ball at a certain spot. We’ve practiced it before, if you remember we used it against Oregon last year. In this game we knew we were gonna run it the first time the ball was on the opponent’s right hash, it just happened to be the first punt so we just said go with it, and it worked. It came really close to being out of bounds when Michael Pittman caught it, he made a really great play, and Ajene was a great actor to drag the coverage over there. We call it the Rat play because we want you to chase the cheese, and the cheese is the punt returner.”

OC2SC
Are any of the current commits expected to sign in the early December signing period?

Justin Dedich is one who says he will sign and enroll early. I’m very anxious to see how the coaches handle this early signing period, which players they choose to sign now and which players elect to wait until February. How does the board change after the early period? Are new kids added who didn’t sign elsewhere? It’s a new element added to the recruiting process that we’ve never seen before and I don’t think anyone knows how it will turn out.

cloghmani3182
Hi Garry, Can you see some coaching changes occurring after the season? If so, who do you think leaves and/or gets replaced?

Helen of Troy
Garry….
Will you enjoy your Thanksgiving Dinner?

Yes, looking forward to it, hope you enjoy yours as well.

TrojanRider4Life
Garry.. I have been a Jack Jones fan since he has arrived, but have some concerns about his progress! He is known to have a swag, or cocky attitude about himself; but is that keeping him from improvements in his all around skill? Teams are going after Jack, and he is getting beat on a regular! Victory is Ours….. FIGHT ON✌​

It’s been an interesting year for Jackie, that’s for sure. I thought there was a time during the middle of the season when he was playing very well and he had the interceptions to show for it but the last couple weeks have been rough for him both in being targeted for big plays and with mental lapses that have resulted in twice being held out of plays in order to get a talking to from the head coach on the sideline. Helton has talked about wanting to allow him to play with emotion but also to understand where the line is that hurts your team, so far Jackie is still trying to find where that line is.

rose green
Trojans should have had an easier time running the ball vs UCLA; Yes, UCLA loaded the box [like most opponents] but SC also had a difficult time getting receivers open as well. Is the Bruin secondary that good or did UCLA just play a lot better than us. [I know from experience in sports that sometimes the underdog just plays better coz; its easier]

Helton addressed it in the Sunday media call and you could tell it frustrated him to not do better in the run game. One of the issues he brought up was the inability for SC to hit any deep passes in order to get Adarius Pickett backed up, he said that made for a “hard night running the ball, we had to get the dirty hard yards”.

What happened to Michael Brown? He was the scholarship place kicker and Chase and Michael competed for the starting position during the camp.

Chase proved that he is better, but any chance that Michael could practice during the bye week and perhaps Michael could kick longer field goals during the Pac 12 Championship, if Chase hasn’t fully recovered from the groin injury?

Michael suffered a knee injury in the Stanford game, had surgery, and is out for the year.
.
Modtrojan
Just signed up so my 1st post: I saw Hufanga’s comments indicating his OV was “unbelievable” and of course the commit of Trevor Trout. But I’ve heard nothing regarding Michael Thompson’s OV. What do you think SC’s chances are for Thompson and Tyreke Smith?

Trout said he doesn’t think Thompson will be making a decision anytime soon. With Smith, I think the Trojans have a legit shot here but I also think he’s got others in play as well so it’s not a done deal in any direction yet.

TrojanHorse
So I would modify the wording to: Which former starters will still NOT be available for the Championship game? then everyone not on that list will be available.

It’s not really clear and we won’t have any updates until after the practice next Monday. Porter Gustin hasn’t practiced since the ASU game so it’s hard to know what his chances are, if any. Rasheem Green and Chris Brown both had injuries against UCLA and are listed as day-to-day, according to Helton. McGrath and Budrovich are day-to-day as well.

Fourthseed
No question Garry, just a big “thank you” for all the years of fun and information I’ve gotten from this board. Your work is greatly appreciated. Fight On!

Thanks for the note

motovich
With only 13 seniors this year, we’re sure short of available scholarships. But we’re recruiting a lot of players. How many freed up scholarships would you guess?

I’m guessing the number will end up being around 20, with some of those counting against 2017 class for guys like Angeline and Bigelow. I’m not sure how that will break out from NFL early entries, transfers, etc but it seems like a reasonable guess right now.