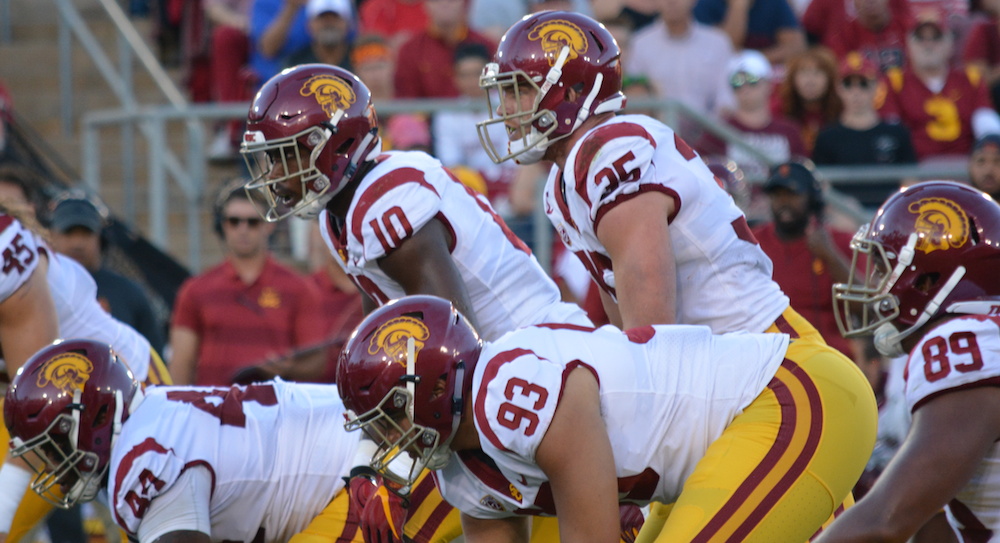 Garry,
Will Coach Devno bring more Physicality to the OL?

Do you sense a change in the Oline starting 5 – especially at C and RT?
We probably have 2 practices before you post your answer 🙂

We haven’t seen any changes yet at practice in the starting line-up but I’m interested in seeing anything at center, right guard or right tackle that could involve Toa or Neilon, Vera-Tucker or McKenzie. I really think that could be the right side of the line next year (if you move Vorhees to left guard).

All through spring and fall camps we were told the defense would be the strength of the team. Well, it isn’t and it never was.

With so many 4 and 5 star players on the bench waiting for their chance, “injuries” is not the answer.

Yes, that’s been a surprise. I’ll look at a couple different areas, first is the inability to get pressure early in the year, I don’t know if it was harder to replace Rasheem Green and Uchenna Nwosu than we thought it would be, but the pressure has only been there in spurts and not on a consistent basis (especially when you add the loss of Gustin, the main guy who was getting pressure). The second point is going to look at the secondary, not just with injuries but with other departures. Let’s face it, we had Bubba Bolden and Ykili Ross battling for a starting safety spot heading into camp, and now both are gone. Isaiah Pola-Moa takes over, and now he is gone. Hard to lose 3 safeties in the rotation and not feel it. And I know not many people want to hear this reality on Jackie Jones but for all the baggage he brought the fact was that Jackie held on to the starting job last year for a reason, he is a talented corner, and it’s been a drop in production this year for the position group to not have him out there.

I know that Clay indicated that if JT clears concussion protocol, he is the starter for Oregon State. Any chance that Sears may get a few series? Having some designed runs or pass plays that work to Jack’s strengths would help our offense. I really liked his demeanor, his arm, and his scrambling ability that gives the defense another wrinkle to account for.

That would be a new wrinkle but then again some new wrinkles might be what this offense needs, and I think most Trojan fans would say they liked what they saw from Jack on Saturday and they wouldn’t mind seeing more.

Jack certainly took his share of reps in practice this week but I don’t know how much we see him play. I hope Helton does give him some work, I agree with your thoughts about liking the way he played and hoping to see more of it.

Do these moves indicate a coach that is fighting for his job? because I know Clay and Lynn Swann meet on mondays on a regular basis, and I still get the sense Swann supports Helton and may give him a chance to fix his staff, What are you hearing on that end?

That’s my read of what is happening. I do think Swann had an impact on the moves being made but I also think it’s part of a plan that Swann believes will help with stability at the coaching spot, which is something he knows well from his time at the Steelers.

Will Drevno be OL coach, RB coach and run coordinator?
Or will a RB coach be hired in the future?

For now, yes, but my guess is that he will be OL coach next year, and a new RB coach will be hired.

Whose call was it to make the
coaching moves? Helton’s or Swann’s?

There wasn’t any sense heading into Monday that Helton planned on making the changes, quite the opposite, he said on Sunday that he would wait until after the season before making those kind of program evaluations. Then he meets with Swann on Monday and announces those changes afterwards. Helton said he made the changes without pushing from Lynn but some of Swann’s statements could be read differently, and I don’t have a problem with Lynn making his feelings clear at this point. As mentioned above, with Lynn’s background at Pittsburgh I do believe he would rather have stability at the coaching spot now so I’ll believe this is the best way he knows to get there, and that’s the deal on the table for Helton from his boss so he needs to find a way to work with that.

I was going to ask this before the news came out about the coaching staff changes. And I’ll preface it by saying that I understand if you don’t wish to answer it.

Garry, would you, Greg and the rest of the WeAreSC editorial and writing staff ever come out with an editorial recommendation that it was time to change a coach? If so, what would it take for you to take such a stand and write such an article?

It hasn’t happened yet, a formal-type of editorial, but that doesn’t mean it couldn’t in the future. I would say the end of the Kiffin era was probably the closest we’ve come, it was really hard to support him as the USC coach.

Noticed Tee stripped all his USC references from social media (twitter/insta)… any updates?

No updates but, yes, very noticeable. I do give Tee a lot of credit for the way he stood and met the media on Tuesday, he didn’t dodge anything and I’m sure that was a tough situation.

Do you remember USC ever firing an assistant coach during the season before? I’ve been following SC football closely since ‘84, and while it may have happened before, I don’t remember it.

Do you think Callaway asked for his own dismissal? He’s been close to Clay for a long time, he’s been an embattled head coach himself, and he probably knew the fans and media needed a scalp. If he’s retiring in a few games anyway, why not sacrifice his own?

Yes, I do think there is a chance that happened. I haven’t heard any indication of it but it makes sense that Callaway could do something like that considering his relationship with Helton.

Garry
I know much has been made of lack of intensity in practice as a sign the coaching staff is lazy.. do you think this applies to recruiting as well .. I look at our opponents and see better players in many games . As an example the running backs from Utah and ASU.. I know you cannot recruit but it seems we are recruiting the lazy way , off of recruiting service rankings rather than going out and watching players live or on film …
I see everyone talk about our high level of talent .. I do not see it in upperclassmen for sure or underclassmen
Your thoughts

I don’t know if I would apply the word lazy to recruiting, the results have been too good overall. And I get what you’re saying about the RB’s from Utah and ASU being good but who would you have dropped from our RB group to sub in one of them? We may questioned the development of guys this year but RoJo gained 1,500 last year and I think the talent is there this year, it just didn’t pan out.

GarryP- do you think Swann makes a head coaching change before USC names a new president or does he stay with Helton and hope the new president does not get rid of both of them?

I don’t think Swann wants to make a change after this year, that’s my read for what happened this week. But I also think Lynn (ever the politician) left himself an opening to see what happens the rest of the way now that these changes have been made.

Do you think the Coaching changes would have been made if SC had squeaked out a win against ASU? Were there any noticeable changes in the tempo or drills at practice Tuesday and Wednesday?

Good question. I’d like to think so but we don’t know for sure. I think the attendance may have had something to do with it too. We saw Drevno being pretty vocal but then again Callaway was vocal too so it’s a matter of what they are saying. There did seem to be more interaction to the players with Drevno, I think the disconnect between Callaway and the players was one of the issues I would point to as the reason for the change.

It still seems unusual to me that someone would have a high enough degree of proficiency to be both a specialty coach for running backs “and” for the offensive line. The two are obviously connected, but they just seem like two different skill sets to me with two different training regimens etc. What is it about Drevno that makes this possible? Or are we trying to get him to do things he shouldn’t be doing?

I think this was a unique situation where the OL coach we wanted to put in place for 2019, happened to be available in 2018 and we needed a RB coach, a position he had coached before in his career. Would he have normally been hired as RB coach? Probably not.

Garry, there has been criticism of the offensive line coaching based on game results. Is there a difference in the coaching at practices by the present staff as compared to past staffs including Pete Carroll’s staffs? If so, what are the specific differences? Are the present problems the result of coaching, schemes, or lack of strength and conditioning? Would appreciate specificity since everyone discusses in general terms that it is a coaching problem solely based on the results.

One of the biggest differences that we’ve seen from Carroll to present day is the definition of what the run game should be within your offense. For all the flash, those Carroll teams never wavered in their foundation of a physical run game. Helton came in using those words but we’ve rarely seen it in games (save for that first Stanford game 2017) and while Callaway may not have been the ideal coach, it’s hard to put too much on him when the scheme and plan is set by his boss. As for the strength and conditioning, once again, Ivan Lewis is executing the plan and producing athletes his boss says he wants. I think in order for the offensive line to get back to being a traditional USC offensive line that was our standard for so many years, we would need to see a change in the style and physical mindset that is set from the top for the program, and that starts in practice.

Hi Gary, my first question ever.
The offense in the 2nd half of ASU/USC game was the best I’ve seen all year.
Was it all T, hard to believe.
If we expand on this kind of offense, we’ll end well.
Defense was also playing hard.

Hi Robin – thanks for asking the question.

There are some people who think this offense is truly designed for an RPO quarterback, and that guys like Sears and Fink are actually better natural fits for the system than JT. It makes sense, and that will be one of the things to watch over the next few weeks.