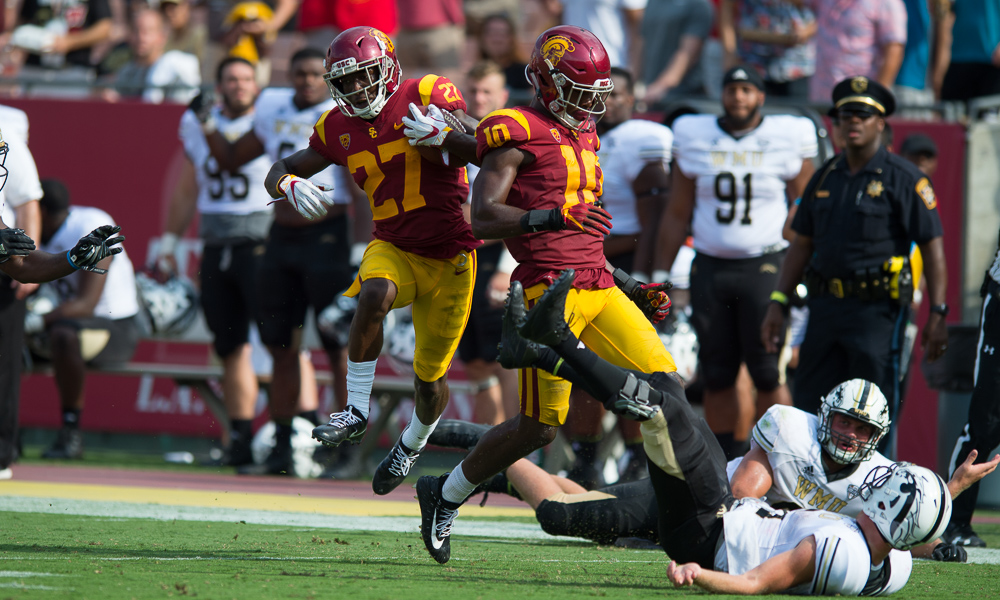 What are your thoughts on Bigelow’s announcement to retire and how does this impact the rotation? Will the doctors evaluate Fatu before leaving for Indiana or does he travel with the team and then examined before the game on Saturday? Thanks.

It was a surprise to hear the news on Kenny but considering his situation it is understandable. The two knee surgeries simply took a toll and he wasn’t the same player but it was good to have him out there this season with anything he could contribute, including the blocked FG in his final appearance as a Trojan. I would prefer to have him in the rotation this weekend with Fatu being out but Kenny says his decision is set (he added that there are some personal issues involved) and he won’t return to the field. I think this is a real opportunity for Brandon Pili to step up in the absence of Fatu, Tuipulotu and Bigelow.

Pec muscle tears on the O line. and bicep tears / strains. What is going on? I have opined a bit but want to look into this. How unusual is this rash of incidents and what are we doing to cause these and what is Callaway / scheme architects going to do to fix it,… or are they?

I don’t know if we can call the two pec injuries a “rash” of incidents. They certainly are unfortunate/unusual timing for the SC o-line but we don’t know enough about how they were caused or what was involved, or if there are steps being taken that are preventative.

scdg71
Garry – What’s your take on coaches making public injury reports? Are there still some coaches who play it close to the vest or hold back info? Seems like Saban might be one. It made me wonder when I saw Imatorbhebbe playing as to whether Utah would like to know if he is 100% or should they not worry so much.

There are definitely coaches who play things closer to the vest. If you remember when Kiffin was here it was a major deal with him, and he even walked out of a media session once when an injury question was asked. I can see things both ways but I certainly appreciate the openness of someone like Helton on this issue.

Garry,
What’s with the zone read wrinkle on offense? Does Sam look comfortable running it to you?

I think he’s looked very comfortable at times, but also we’ve seen times (like last week) when there were some issues with spacing and timing. I think it’s a natural fit for Sam if things are going up tempo and he can use his instincts, they are such a strength of what he does and I just think he presents such a good running option if used properly.

Garry, Adoree Jackson was one of those special players who could turn a game completely around with a punt return. UCLA 2015 and Notre Dame last year are two examples. Ajene Harris is ranked 77th in the country with a 4.5 yard average. Do you have an thoughts why the numbers are so low this season and are the coaches addressing it?

Adoree’ was special in the role, no doubt. The thought process of the coaches to put Ajene back there was based in trust. Ajene is one of those players who does so many things right in the absence of an “Adoree’-type” player so the decision was made to go with someone who would catch the ball, not make mistakes, and with the ability to do something with the ball at times. Helton was asked in the media call on Sunday if he was looking to address the role in order to get more production but he gave the indication that he is OK with that Ajene has done.

All of UCLA’s national defensive rankings are in the mid to high 120’s. I’m informed that’s not terrific.

To what can we attribute these dismaying statistics? Please attribute a percentage to each of the likely causes: (1) The curse of Cade McNown’s bootleg; (2) the incompatibility of school and football per John Rosen; (3) wearing a not-overly-manly shade of powder blue; (4) UCLA’s lofty academic standards for football players, which are allegedly higher than those for entry into most of Oxford University’s doctoral programs; and (5) the loss of critical UCLA football traditions, like jumping over the practice field wall and ditching practice.

All play a role in their body of work to achieve those lofty rankings. Personally I think there is a little extra karma for #1, I was there and will always remember it. As for #5 I would add the lost tradition of handicap parking permits.

SoCalN8tiv
Garry, there’s video of punt return drills with principals Ajene, Ross, Sydney, Jack Jack, Vaughns, and Velus. Not really drills but they were taking turns shagging punts.
Do you think this is a potential indicator the coaches have opened up the competition for punt returner? Thanks in advance 🙂

I wouldn’t read that much into it. There is usually a group of 4-6 guys back there rotating during punt return drills, just as there is for kickoff return drills, and so far Helton continues to publicly support Ajene in that role. Of course, it doesn’t rule out the competition being opened up either, we just haven’t heard that.

Garry
Maybe I am just trying to be very
optimistic, but it seemed like a switch was flipped during the second half of the Utah game.
USC looked like a different team.

Do you get the feeling the Trojans have turned the corner?

I’m optimistic as well. That 2nd half was certainly as good as we could want the Trojans to play, and I would love to see that kind of effort on Saturday against the Irish. Sometimes all it takes is a half like that to turn things around, turn the corner as you say, but I want to see how things go in this game before I’m ready to say that.

crank31
During Brian Kelly’s USC press conference, he acknowledged that Wimbush’s is not a proven passer. Should USC feel in a good position facing a one dimensional QB coming off two weeks away from game action?

His strength has always been more as a running QB element in an offense that puts up over 300 yards per game on the ground, so they don’t count on him as a passer to drive the offense. They look to run the ball and then mix some key passes in there and with two weeks off I’m expecting Wimbush will be ready to do that.

Troy70
Do you think SC puts in a new punt returner?

I don’t think so, not in a game like this on the road in South Bend. I will also say that I just don’t think punt return is a strength of Ajene’s game, love so much else that he does but so far just haven’t seen it in this role.

Garry, How about an update on wearesc.com membership?

Memberships are up and running and thanks for your support. For those who are interested, the membership donation page is here

TrojanInSF
Garry, do you agree with Helton’s decision (to date) to not burn Tufele’s redshirt? Our depth at DT has been completely depleted – Fatu is out for at least this weekend, Green has played on a balky ankle all season, and Tuipulotu is out for the year. I haven’t seen Tufele in practice once, but the fact that he’s getting reps with the 1’s tells me that he could at least contribute. We have a ton of important football left – potentially 7+ games – and I think if the kid can help you win, you play him. What are your thoughts?

I agree with the decision not to burn it until this week, now I think it is very much on the table. You’ve got Fatu out, Bigelow is no longer playing, and Tuipulotu is gone for the season. And Helton did say yesterday what you mentioned, that there is still a lot of football left for a possible conference title so if someone like Jay can help then you burn the year. I would have no problem if that happens right now.

GoSC27!
We saw the tempo accelerate in the second half of the Utah game and that is when Sam felt most comfortable getting into a rhythm. Do you see us letting Sam get into this accelerated tempo to try to put up points fast and see if the Domer’s can keep up with the scoring? Very similar to the Stanford game where we scored on our first 2 or 3 possessions and Stanford could not keep up. It actually made Stanford have to throw the ball of which that was not their core strength.
Thanks and Fight On!

I really hope we see that more with Sam and the offense. He is one of those guys who is always in attack mode and I think that’s when he plays his best.

Sorry if this may be information already posted in the regular topics but what is the status of Stephen Carr and Daniel Imatorbhebbe for the game Saturday?

Was really surprised to see Daniel in there for a number of plays against Utah and of course ESPN guys didn’t have a clue – they couldn’t even seem to find Josh Falo’s name after he scored. Hopefully the Utah stint was to get Daniel ready to return to action against Notre Dame as USC could certainly use him given the mismatch potential he provides when he is in the game.

Carr not looking good to play, Daniel Imatorbebhe very likely to play. Daniel was able to go through practice this week and was taking part in blocking drills and team drills. That tells me he will be there, and I like the fact that he was able to get his feet wet a little bit last week with some game action.

Tell them to learn Falo’s name, they will be calling it a lot in the future.