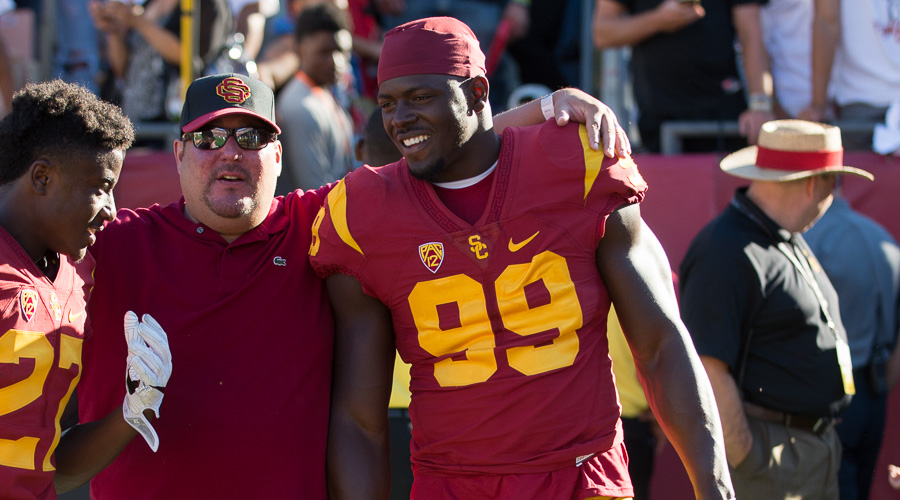 In this week’s edition of the mailbag we talk about the impact of Justin Davis being out of the line-up, the play of freshmen such as Jordan Iosefa and Oluwole Betiku, and the status of Noah Jefferson

Garry, who do you see having a bigger impact from the RB position with J. Davis likely to be unavailable for the game? RJ2 or A. Ware?

The first instinct is to say RoJo. He’s the one who will get first shot at being the lead back and he’s shown more flashes to this point than Ware. It will be real interesting to see what Jones does with this opportunity because he hasn’t really gotten on track yet this year, would be a great time for that “breakout” kind of game.

Garry do you see more swing passes and options to get RoJo more touches where he is outside the tackles being called by CTM?

Yes, I do think we will see that. Jones isn’t the same kind of between the tackles runner that Justin Davis is, and he can do a lot of his damage when he gets to the outside to take advantage of his speed. The passing game is one area where there is a big dropoff between what Davis can do and what RoJo can do so I’m not sure how much the Trojans will focus on that.

Garry, it looks like Zona plays a 3-4 with the similar NT, 2-DT’s and 2-Rush OLB’s as we do? These all look very undersized and I assume rely on speed? If this is the case, I think you let Banner sit this one out and heal up, and put Edoga/Simmons out there at RT?

Helton is being very non-committal right now about Banner playing, and the fact that he sat him in recent weeks shows that he isn’t going to put Zach out there if the ankle isn’t going to allow him to play anywhere near full strength. Zach made it clear that he was begging Helton to let him play, that he was healthy enough, but it didn’t happen. With that being said, Zach did practice a lot this week so my guess is that he will be out there on Saturday.

Any update on Noah? Thanks!

Nothing lately on Noah Jefferson. He hasn’t been spotted at any practices or at the Coliseum during the recent games, and there haven’t been any updates provided by the school in terms of any academic/injury progress. It’s somewhat of an odd situation because the defensive line could really use him yet we’re not hearing Helton or anyone else talk about a pending return.

Am I one of the few USC posters/fans that is not completely buying into the hype of USC being a contender now that Darnold has taken the helm? The kid is a gun-slinger and he makes plays but I waiting to see how he handles our four-game stretch of UO/UW/UCLA/ND before I can any judgments on his ability to lead us back to the top. How do you feel about him in relation to leading us back to conference/national prominence?

I think there are different levels of hype from different people. There may be some who are talking about contending status again but I get the sense that most people are really enjoying what Darnold is bringing while taking more of a wait-and-see approach in terms of where things are going overall. I like the fact that the team still has a couple more games (and a bye week) to get things settled with Darnold and to continue to fine tune on defense before the tough November stretch begins. And I’ll say this, if the team continues to progress, and with Darnold leading the way, I am very interested to see how that stretch plays out.

Interesting that Iosefa getting most of the time with the 1’s on defense with Hutchings hurt. Did he leapfrog Powell and Houston at ILB?

Yes it is and kudos to Jordan. He has been pretty active and he will hit you. I think most people had him viewed as one of the lower recruits in this past recruiting class and not much was expected from him but he’s worked his way to a #2 role at WLB behind Hutchings and, as noted, even took some first team reps this week with Hutchings out. That means he has moved ahead of Powell, but Houston is lining up behind Smith at MLB so he and Jordan are playing different spots.

Do you see Wole having an increased roll from here on out? Is he getting more reps in practice?

I do expect an increased role for Wole. It would be surprising if they burn his redshirt year and then don’t give him a role because he brings something this defense definitely needs and that is the ability to provide speed off the edge in pursuit of the quarterback. We’ve seen an increase in his reps the last couple weeks in practice as Helton said the “light turned on” for him in terms of adjusting to the speed and playing level of the college game. It’s always important to remember how “young” Wole is strictly as far as football experience is concerned and the more he adjusts to this level the scarier it’s going to be for opponents.

Jamel cook is the big hitter we have been missing in the secondary. What’s his status?

Jamel is getting more and more practice time in recent days and that is great to see. He’s a pretty noticeable presence out there with his 6-4 frame and he moves pretty well considering he’s coming off a foot injury. It wouldn’t surprise me at all to see his redshirt year burned and for him to start getting playing time in the safety rotation and on special teams.

Which QB is running the Scout team in practice. Is Fink out for the season?

Fink is practicing right now, and he has been the primary guy working as the scout team QB. One thing we do see from time to time is Jalen Greene get some extra reps in team period against the first defense if the opponent has a dual threat QB.