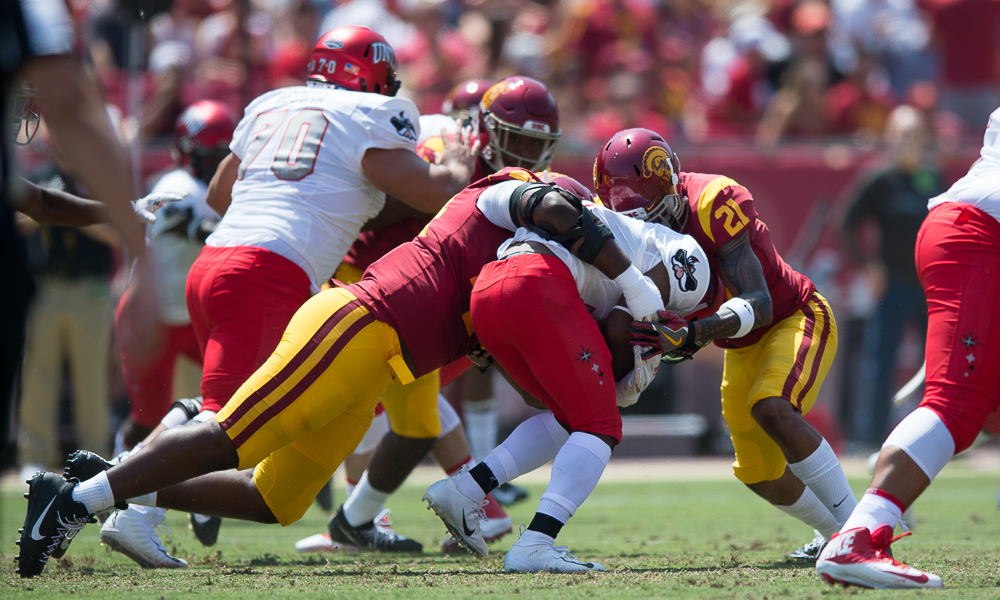 What is the quota for OL this recruiting season? Are we close to filling that?

I can see the Trojans taking at least four, if not 5, offensive linemen for this class. Right now we have two; OT Jason Rodriguez and DL Gino Quinones, who projects to flip over to offensive guard. Of the remaining targets I would put Sean Ryhan from San Juan Hills at the top of my wish list.

Is this game a one game playoff, a L means no PAC South?

Not necessarily. I think it will probably be the case but I can see this being a year where the title game participants each have multiple conference losses.

Your opinion, do you think the final departure of Bubba Bolden will have an impact on team morale .. I would think he had a lot of friends on the team and the apparent lack of help from the athletic department to support one of them may be a cause for decension
Looking for some on the inside like yourself to comment

I don’t think so. I’ve seen social media posts from teammates supporting Bubba but I don’t see it as anything that would have a negative impact on the team.

Garry
I’m not ready to give up on CH yet, but does it concern you that he seems to be satisfied with not winning NC’s. Championship coaches seem to loathe losing and will do whatever is in their capacity to get better. This attitude seems to filter down all the way to the players. Not to keep trusting an unproven process, create a process that works on the field as good as the one he has in place on the recruiting trail. Do you think it would be a good idea for CH to go outside of his rolodex and find some assistants from different regions to make some recruiting inroads as well as a different perspective on running the program. Coach McCullough was a n amazing pickup, he brought in Steppe and I would have loved to see what he would have done with him and Carr. Point is those types of coaches are out there, why aren’t we going after them? It seems like we are just a few tweaks from turning that corner. I’d really prefer not to start all over again.

I wouldn’t say that he seems satisfied with not winning national titles, he often talks about that as one of the goals at USC. I think the question right now revolves around his idea of how to get there, and will it be successful. I think it’s fair to say that many Trojan fans have legitimate questions about that at the moment. For instance, he came in talking about wanting to establish a power run game as the foundation on his offense, and I don’t think we’ve seen that in the way the power run game has been a foundation at USC in the past. He will talk about tough, physical practices that aren’t at a level of physical practices we’ve seen in the past. Do I think he could benefit with going outside his coaching circle of influence for some of his assistants? Yes I do. But he is clearly comfortable setting up his staff this way. When Tyson left there was an opportunity to bring in a veteran QB coach to work with a young prodigy like J.T. Daniels but Clay went with a first-time position coach who he was familiar with. Bryan Ellis may be a great coach someday, I don’t know, but the reality right now is that he’s a first-year coach. These are the type of decisions that Helton has made and they will go a long way toward determining how long he is in this job.

Garry, Did Bubba Bolden get a fair shake? Does the “penalty” fit the “crime?” What do you know of the process?

It’s hard to say when there are so many details about the process that we don’t know. I’ll say this, what Bubba did is something that’s going to be taken seriously these days and I’m not surprised the penalty was severe. But of the details we do know, the one I find interesting is the decision to suspend him for 28 months because that is the length of time that two of the female athletes at the party will still be enrolled at USC. But why, specifically? Bubba’s statement would lead you to believe it was for violating the code relating to underage drinking. His claim that the Threat Assessment Office found him not to be a threat, and that the Title IX declined to open an investigation, definitely leads to questions about how the University office of Student Judicial Affairs and Community Standards arrived at their decision. And unfortunately we’ll probably never know because those details are usually kept pretty quiet.

After we beat the Buffaloes, which players will be named MVP (offensive/defensive)?
Fight On!

I think Kris is definitely a potential USC head coach at some point in his career.

Do you know if Clancy P intends on having Biggie shadow Shenault the whole game, or does he allow our other corners to get a chance to cover him? What would be the best option in terms of making sure Shenault is not left in one-on-one coverage versus one of our other CB’s especially in the red-zone? Do you put Marvell over top of him or would you play the typical Clancy soft-zone?

No, we don’t know what the Clancy plan is for that match-up but I think it will be one of the most important chess-match elements of the game. The big key is that USC usually puts the corners on one side for the game and they stay there. Will Clancy shake that up? How will Colorado counter with where they line him up?

What about this undefeated Colorado squad has got them ranked so low at this point in the season?

I would say their schedule has a lot to do with it, as they haven’t exactly faced a daunting schedule (Nebraska should have scored some early season schedule points but the Huskers haven’t won a game yet).

Did anyone dare to ask why a USC women’s team coach was at a drinking party with students? qqqqqqqqman alluded to this in his post. I’m wondering if it’s been verified or if it’s more hearsay. Yet another reason why the accused should be allowed to speak out against accusations if The Office of Title IX is going to deny the accused due process anyway. Why stay silent when your future is at stake? It makes zero sense for USC to flush their time and investment in a student-athlete based on hearsay. Who gets railroaded next?

I’ve never heard that confirmed about a coach being there.

When will we see Olaijah Griffin get more reps in the secondary? Hear good things about him in reading the practice reports and secondary play other than Biggie has been very shaky at times this year.

We started to see it in the Arizona game, when Griffin took some first team reps in practice that week and got plenty of reps in the game. My guess is we see that continue this weekend and for the rest of the year, he’s too good to be on the sideline.

From the we are sc round table article:

One of the points of emphasis Clay Helton made to the team during the bye week was the fact that they have started strong offensively in several games but need to close games better.

GarryP, the reason the offense starts strong is because they run the football early and get away from that.

Helton doesn’t make the defense stop us, his play calling stops us.

My question is how does Helton hope to finish strong?

I think there is merit to what you’re saying. When USC is on their scripted plays at the beginning they are usually successful, and it usually involves a good amount of running the ball. As the game goes along things often get slanted to the pass (the Arizona game being the exception) and the Stanford and Texas losses were examples of that. Helton said this week that one of the keys to finishing strong is to stay aggressive (to play to win) so we’ll see how that translates the rest of the way.

Garry,
Are we seeing a formula on how NOT to build a SEC type physical team? They say a house is built on a strong foundation yet year after year it’s the skilled players that are recruited as a priority. That would be like buying a bunch of fancy windows for a house that has bad footing and a cracked foundation. Need proof? We’ve all seen teams with 3 star skilled guys and a good OL push around these USC teams over the years. WSU two years in a row comes to mind.

Tell me again how Helton want’s to be a physical team? Because I’m not seeing that dedication the way he recruits.

What would this class make it 13 WR’s on this roster?

The question is can this team afford to only bring in 2 or 3 Big bodies each class and expect to compete with a OSU?

The issue with not recruiting enough bodies on the line can be traced directly to the sanctions when Kiffin made the decision to keep the skill numbers high in the time of roster reductions, and that meant sacrificing on the lines. You had to cut somewhere with roster reductions so it was somewhat understandable, but that doesn’t explain Helton taking 2 offensive linemen in 2 of the last 3 classes. Especially when the year that he took 5 is turning out to be a pretty good group (2 starters so far and possibly all 5 starting next year).

Garry- If SC ends up the season with 6 wins or less, any chance that Swann sends Clay packing, or is that just wishful thinking?

If the Trojans go 3-4 (or worse) the rest of the way I wouldn’t rule out a change being made but Swann is a real wild card in this situation. What are his thoughts right now? We’ve certainly heard he doesn’t like the style of play in regards to the physical foundation but would he be ready to make a change? Does he have the authority right now with no school president in place? These are things we just don’t know about Swann as an administrator.

Have you observed the D line practice much this year? BKU isn’t a bad coach, but we don’t seem to get much penetration. Is it Clancy’s scheme that has us slanting the wrong way? or do our starters not have much of a motor? I mean those blocked kicks would say otherwise. It seems as though we are lucky to even ever get a coverage sack this year. Can we expect some this week? Notice no Bubba questions from my direction…

The lack of a pass rush is puzzling. Christian Rector was a revelation last year, and so was Jordan Iosefa, but as both of them have moved into starting roles they have zero sacks between them so far this year. I wouldn’t have predicted that at the start of the year. And to see the trio of Pili, Marlon and Tufele with only 1.5 sacks is not something I expected either. Helton commented recently about how it’s something that will come in time, well, it’s time.