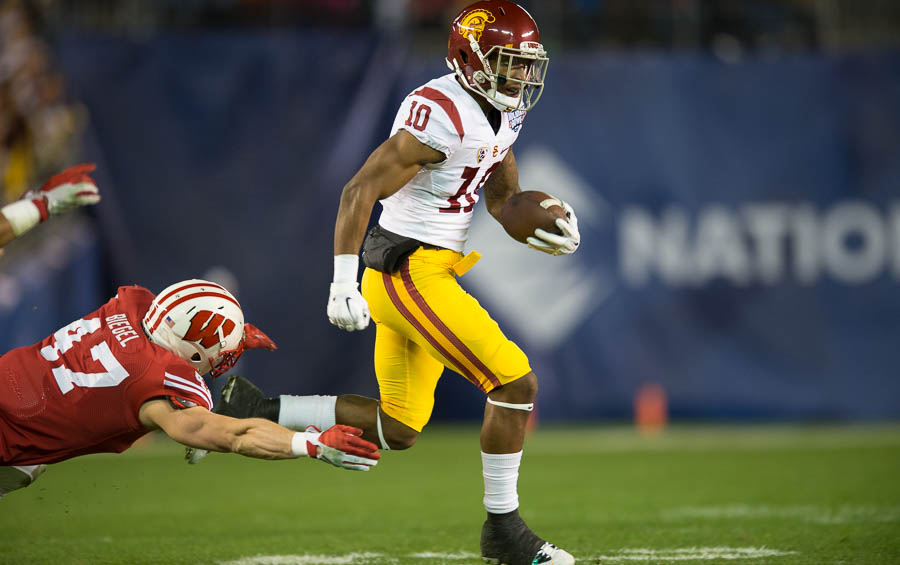 Here is our Friday WeAreSC mailbag, with questions about the final spot on the USC coaching staff, recruiting and filling key position spots as the Trojans prepare for spring ball.

If true, why BKU and not some DL coach with more experience then BKU. I can’t believe that a school and football program like USC can’t get a big time HC or even big time DL coach. Can you explain this one to me.

“If it is Kenechi, and nothing has been confirmed by the school as of the time I’m writing this, I think there are quite a few factors in his favor. The first one, based on what we saw in bowl practices, is that he seems like a very hands on coach. He was working after practice every day with one of the linemen on different techniques, and he seems to focus on the teaching aspect of the job to make the players better on and off the field. And there is a lot of credibility for him in that regard, when he talks, the players listen because his playing career and life story command respect. Obviously there is a hole in his resume as far as actual coaching experience, you can’t hide that, and I know Helton and Pendergast did look hard at other candidates during the process. If it ends up being BKU though, I’d be pretty content with the decision.’

Do you know where USC stands in Lamar Jackson’s recruitment?

‘Right now there doesn’t seem to be much traction. Nebraska and ASU are two schools you hear mentioned a lot for him, but at this point something would have to change for the Trojans to be on his short list.’

What are your opinions about Coach Helton’s personal ability to recruit?

‘Coach Helton has always connected well on the recruiting trail, and a big part of that is because his genuine good nature comes through. There is a big difference, however, between doing your part as an assistant coach versus finalizing the deal for an elite recruit as the head man, and we’re going to find out a lot in the next two weeks about judging Helton in that regard when we see how this class closes. The Trojans have a solid class right now but it can rise considerably if they finish with some of the top players on the board, it can also stay right where it is if they miss on too many of those top guys.’

With USC’s recent hires you get the sense that Coach Helton is most interested in teachers and/or game planners rather than recruiters (with the notable exception of Tee Martin who was already on staff). The hires, with maybe the exception of Clancy, were not high profile or flashy, even with Helton himself.

‘I would agree that the hires tended to be non-flashy and, as you say, that matches the head coach style as well. There is a lot of comfort for Helton with the group he ended up with, coaches he either has worked with before or has connections to, and only time will tell how they work together as a staff. And I don’t think it’s an accident that each phase of the team has what you would call a sage presence; Neil Callaway on offense, Clancy Pendergast on defense and John Baxter with special teams. In terms of the ability of the staff to recruit, let’s see what happens. I’ve got a feeling they might be better than a lot of people think.’

What will it take for you to consider our 2016 recruiting class a success, and what is the probability we will achieve it?

‘There is work to be done on the defensive line and the secondary. The Trojans want to add at least two more recruits on the line, and I think three are needed in the secondary. I feel confident about the line right now with some of the names in consideration but corner is a concern, with Jackie Jones being a huge priority.’

Have we send the end of those metallic red helmets with the silver facemasks?

‘For those fans of the traditional uniform I thought one of the most telling early signs of the Clay Helton era was the fact that the Trojans wore traditional white socks in the two games since Helton was named head coach. White socks and black shoes were staples of the USC uniform for decades but recent years has seen the shoes change to a cardinal and gold mix (they have since gone back to black) and the socks were changed to black. The fact that Helton made this sock change as soon as he was named coach should say something about how he views the traditional USC look.’

Will Jalen Greene (photo above) have any shot at QB, or have things been pre-ordained?

‘We haven’t heard anything yet on how Greene will be handled in terms of staying at wide receiver or moving back to quarterback for a run at the starting spot. It has to be a difficult decision for Jalen because I do think he has enough talent as a quarterback to play the position, but he is also progressing nicely as a receiver and getting all the reps he can in spring would be important for his development.”

How big is the gap between where Alabama is as a football program and where USC is in terms of player development? Is this staff capable of bridging that gap?

“Alabama as a program is operating at a high level under Saban, and it’s a level that USC fans are familiar with because they saw it recently under Carroll. The Trojans aren’t there at the moment, I think that’s fair to say, and it will be a tall test for a new staff to be compared to where Alabama is at when the teams play next year. The good news for USC fans is that the Trojans are one of those programs that can get cranked back up in a hurry, another thing that happened under Carroll, just as it happened under Saban after he took over with the Tide. Now it’s time to find out if Helton and staff are capable of doing something similar, we just don’t know the answer to that yet.”

Garry, seems like a big turnover year in the Pac 12; many new QB’s and potential stars. Who are the top 3 SC newcomers that have to perform at a high level for SC to have a great year?

“Number one is the new quarterback. The offense is loaded with experience everywhere else, and the quarterback will need to step in efficiently for it to succeed. Next I’m going to look at the front seven; the interior, the OLB/DE spot, and the need to find an inside linebacker to pair with Cameron Smith. I look for Rasheem Green to step up inside, I think Porter Gustin is a favorite to fill one of the OLB positions but could it be someone like Oluwole Betiku, or a JC recruit like Jonathan Kopngbo, who lines up opposite him? Where does Osa Masina end up? Lots of opportunity in the front seven for newcomers to fill in.”

Who do you expect to be in the mix for starting center next season.

“Toa Lobendahn would be my projected starter but since he will miss spring while rehabbing from a knee injury, there will be others such as Khaliel Rodgers. Nico Falah and Cole Smith who could get an extended look.”