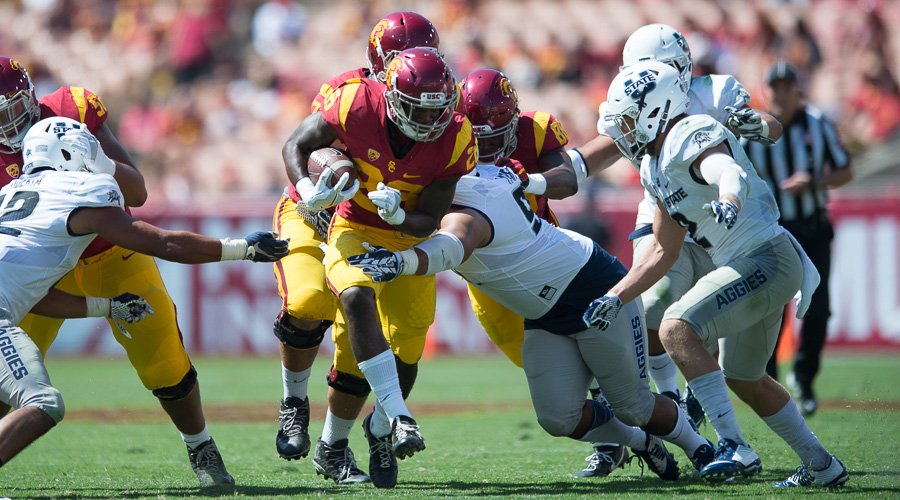 In this edition of the mailbag we discuss return men, blueshirts, power run game and top priority recruits.

Does Isaiah Langley get more playing time next year?

I don’t know. At this point last year it looked like Isaiah was poised to be the #3 corner but it didn’t turn out that way, and it will be interesting to see where things go from here. You figure Biggie is set at one starting spot and Isaiah will battle Ajene Harris, Jonathan Lockett, Jackie Jones and Pie Young (and any incoming freshmen) for the other spot, as well as the key reserve roles. From what we saw this past fall I wouldn’t anticipate Langley leapfrogging that group enough for a bigger role, but he will get the chance to do it this off-season.

With Adoree leaving and taking his quick-strike return capability with him, is there anybody remaining on the roster who can take a kickoff or punt to the house? Also, are any of the expected incoming recruits potentially great return men?

I would put Jackie Jones as the early leader for the return roles, with others in the mix being Deontay Burnett, Steven Mitchell (if healthy), Dominic Davis, Pie Young, Trevon Sidney and Velus Jones.

What do you think of the staff’s strategy to pull in 2-3 blue shirts every year? It doesn’t seem like the top recruiting schools use blue shirts. There have certainly been some hits with Burnett and Booermeister, but every year we’re 2-3 rides short of our 25 max. Wasn’t that strategy started to help fill up the depleted roster after sanctions? Now with no sanctions, is this strategy really helping us?

I would say there’s been more than ‘’some’’ hits on the blueshirt route for the Trojans in recent years, with contributors such as Stevie Tu’ikolovatu, Deontay Burnett, Daniel Imatorbhebhe, Taylor McNamara, Matt Boermeester and Chris Tilbey. I agree that it’s a strategy that made a lot of sense as we were coming off sanctions and I wouldn’t want to use it as part of our regular recruiting plans, but I think the coaches will use a couple this year to help counter a small senior class.

What’s your ritual for national signing day? Where do you prefer to be?

I like being in the office in front of the computer all day. In past years we’ve gone to signing day ceremonies or been involved in various media shows but I always felt a lot was missed if you are out and about that day rather than at the computer following the action.

What was the biggest NSD surprise you can recall? Was it a player we signed or lost?

I still think what this staff did last year on signing day was one of the more impressive things I’ve seen, to fill 7 open spots and to fill them well, that’s not an easy thing to do. If you’re talking a specific player, the DeSean Jackson announcement to Cal was a complete surprise. Like a lot of people, I thought for sure DeSean was headed to USC. In the days leading up to signing day I had seen DeSean and his family at an event, and his dad said to me as they were leaving “you’re gonna love me on signing day”. I certainly took that as a good sign for the Trojans and prepared for him to hold up a USC jersey in the Fox studios when we filmed the signing day show. Needless to say, DeSean ripped open a box of Cal jerseys as he announced his choice, and I was not loving his dad at that moment.

Any clue about another coach added to staff?

No rumblings yet. I could see them adding a TE coach which would allow John Baxter to focus solely on special teams, or possibly an additional defensive coach to help Clancy (who serves as DC and ILB coach).

Will the 2017 Rose Bowl Trophy be on view permanently at Heritage Hall?

Yes, at some point. One of the reasons for the redesign of HH was so that it could serve as a ‘’trophy showcase’’ for the athletic department.

Will we flip Wyatt Davis? What say you?

Hard to say at this point. There were a lot of rumblings in late November/early December about the possibility, and Wyatt was asking some very specific questions about the USC program and what the USC connections mean after graduation. There haven’t been as many rumblings recently and that could mean he is now all set with Ohio State, or it could mean he’s simply staying quiet as he considers a move. I think he’s one of the few true freshmen who could come in and compete right away for the starting LG spot vacated by Damien Mama.

Lost in the excitement that Sam Darnold brings is the aspiration to return to a physical running team. I believe we saw some of that this year but not in a conclusive fashion. As we look ahead though the RB corps is better than its been since Bush-White IMHO. Can you comment on this and give your thoughts on what our running attack might look like next year?

I’m as much of a fan of the “physical” run game as anybody but I’m also very happy when we run the ball 200 yards per game, which is what happened this year. I’m anxious to see what happens as the offense continues to grow under Helton because, as you say, the running back position has some guys who can pound it (I’m thinking Ware and Malepeai in that kind of role) and it wouldn’t surprise me at all if we continue to evolve more toward Helton’s stated goal.

Aca’Cedric Ware has the frame to distribute 20 extra pounds on his body without slowing him down, especially added muscle. He doesn’t need to be flash and dash but he needs to be the physical presence coming out of the backfield. What do you say about a 230 lb. Ware back there to go along with his reputation for having a violent running style?

As you can see from the response above I do think Ware is an extremely hard runner, nothing flashy, although I don’t think he’s going to quite get to that 230-pound range. As much as I’m going to miss watching Justin Davis run, I’m ready to see what Aca’Cedric can do with more of a regular role in the rotation.

Please name three of the most important recruits — regardless of their positions — that our Trojans must land on NSD to have a successful recruiting cycle and why? Thanks.

Austin Jackson (put the finishing touches on a very good OL group), Jay Tufele (has a chance to be a dominant big man in middle of DL), Joseph Lewis (no matter how many receivers we have you don’t want to miss on such a good one right in your backyard, and getting Lewis could help lead to Greg Johnson this year, and Jalen Hall next year). Can I add a 4th name? Josh Falo, I think he is a real weapon as a pass catcher.