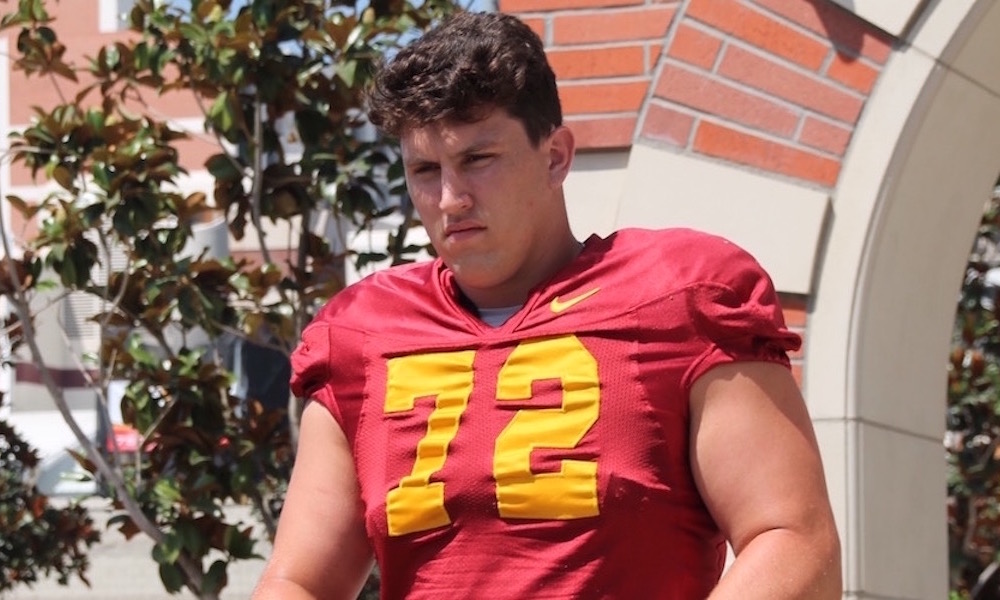 kbruce9022
Garry: 1)Why didn’t McCullogh wait until after signing day to announce to the Chiefs?
2) Any clue as to why Clay Helton wasn’t selected/elected as PAC-12 COY? Your guesses count. Best, Kevin.

Kevin – The Chiefs didn’t waste any time going after Deland once they promoted their RB coach to OC and they are already starting with draft events like the Shrine Game, Senior Bowl and the Combine. I’m guessing they didn’t want to wait around for a month for Deland to finish up business at SC, they needed him there. As for Helton and the COY, the most interesting thing to me is that it’s based on the votes from the other conference coaches. As Trojan fans we look at it and say Helton beat Shaw twice so how can you give it to Shaw? And that’s pretty valid to me, as the new ASU coach once said “you play to win the game”. But the coaches are looking at it differently, and what made them vote that way? I think one of the factors is that they saw the entirety of the season and a lot of close games for the Trojans, the inconsistencies on offense, the bouts of undisciplined play, and yet they are well aware of the kind of talent on the USC roster and what is possible.

usc88
Isn’t having 3 scholarship punters and 2 kickers excessive?
It seems like there is more need at CB and OL. Isn’t balance as important as
taking the best players available?

Yes, it would be excessive but I don’t think we’ll have 5 scholarships on the roster at the same time. We’ll see how things shake out by the fall. Don’t get me wrong, even 4 is a big number but that’s the way it worked out with both scholarship players being beaten out by walk-ons last year. And you’re correct, roster balance is one of the more important elements of recruiting.

gubo&palanka
Based on what you have seen, who has the best arm: PC, Kiff, Sark or Clay?

I would give Sark the nod for best arm, he’s just a natural elite athlete. But the most energetic, the one who tried to throw it the furthest, the one who wouldn’t end a drill on a dropped pass, was Carroll. He would be fired up to throw during the same drill every day in practice and he took it seriously.

motovich
Any update on the condition of Porter Gustin’s toe and bicep? Seems like he was taking a long time to heal his toe after he reinjured it.

No update since the final week of bowl practices when Gustin was officially ruled out. The media probably won’t meet with Helton again until signing day.
​
desertfoxx
Garry
Any candidates on your radar for running back coach.. do you anticipate an announcement before LOI day..

I would always have Kennedy Polamalu on my radar when it comes to running backs but he’s with the Vikings right now getting ready to make a run at a Super Bowl, and I wouldn’t rule out Helton taking a run at Tommie Robinson. It would be unlikely with the money Robinson got from LSU but Helton didn’t want to lose him in the first place. Other than that, I haven’t heard any new names in the mix but it wouldn’t surprise me to hear an announcement at any time.

MilwaukeeBuck
Is there a chance Solo T is a blue shirt? Read somewhere he hasn’t taken his official to SC yet, & with his knee injury do you think this is a possibility for the Trojans?… thanks & Fight On!

Solomon said this week that he still plans on taking an official visit to USC so the blueshirt option would be off the table. I doubt the coaches would have been looking at him as a blueshirt since he’s still looking so hard at other schools, they wouldn’t want to pass up on the in-home visits and the official visit.

KeepCalm&FightOn
Hi Garry — Daniel Imatorbhebhe was probably my favorite emerging weapon on offense last year. It was just so great to see a TE make such a huge impact in the passing game again. But then, this year started and ended, and he was just a non-factor when he did see the field. I know he was injured, and I apologize if this has already been covered, but did we ever get the full story there? Was it really just a season long injury or was something else going on? How did he look for bowl prep? I’m sure Falo will step up in the future but I really hope Daniel has a big bounce back year.

I don’t think there was anything more than an injury that really lingered. He was basically out starting in June, they tried to bring him back for the start of the season and that didn’t really work, he was able to come back for the final stretch but I don’t think he was ever at the level we saw the previous year. There were a few nice catches and a few near misses on big plays, and I still think he was the best blocking tight end we had, but I’m guessing it will be a whole different Daniel next year if he can get healthy this off-season.

ectrojan
Do you think there will be competition in the spring for some of the O-line spots or will the starters mostly remain the same?

I expect to see a lot of mixing around in spring with the line. You figure Chris Brown, Chuma Edoga, Andrew Vorhees and Toa Lobendahn (center?) are pretty set to be starters, although that doesn’t mean guys like Roy Hemsley at LG, Jordan Austin at RG and Clayton Johnston at RT won’t be a look with the 1’s, along with the centers that include Cole Smith, Bret Neilon and Justin Dedich. Austin Jackson will get first look at LT, we could also see Johnston compete with him there. And where will Jalen McKenzie line up? He’s one guy I’m anxious to see.

Can you please provide an update, or your opinion, as to the status of O Line coaching and Strength & Conditioning program? I’ve seen the strength training resources available to the players … they look absolutely amazing, but when you look at our players versus the ND’s / OSU’s / Alabama’s of the world, we just look like more of a Junior Varsity team. What changes might we see in this area, and for potential OLine coaching changes?

I think it’s important to remember with assistant coaches and S&C that the direction comes from the top. The identity of the offense and the line schemes that are used are set by Clay Helton, and he is the one who decides if Callaway is implementing what he wants or not. Don’t get me wrong, coaching is certainly part of it to develop guys who want to get after it but is it a scheme that is conducive to that physical style? With the S&C program, there is a lot of direction from the coaches of what they want each player to be able to do, how big is their ideal weight, etc. There is a lot of information gathered and monitored about each player and the individual plan is developed to get to that point. If Ivan Lewis wasn’t developing the players to the specifics that Helton wants he probably wouldn’t be here.

scdg71
I’ve seen some information that may not have any truth to it all. I heard that Tee did not call the plays against tOSU … Bryan Ellis – our new QB coach did. What exactly is the true story?

The story out there is that Ellis called the pass plays in the bowl game, it’s not a confirmed story but I’m not going to dismiss it either based upon the sources I’ve heard (it would also fit a pattern we saw during the regular season of play calling being divided up amongst the coaches).

Stevie Blue
Any chance Coach Baxter is going to be let go?

That would surprise me. Helton has a lot of faith in Baxter.

Rainman44
One of the more interesting position battles could be for the vacated LBer position held by Uchenna Nwuso. Needless to say, USC D will miss him. But that isn’t to say that the role can’t be filled sufficiently (in the short run) by an up and comer. So I’m interested to hear your thoughts on who will be competing for this spot, and who you like.

I would start with giving Jordan Iosefa a look. I thought his skill set fit better this year at outside linebacker than it did inside, so why not flip him over from the Predator spot to take a look. I also wouldn’t mind getting a look at Levi Jones, using the same logic as Iosefa in that Jones has such good athleticism that he may fit well outside. Oluwole Betiku will be there, as he has been for two years. All the skills are there with Wole but they haven’t come together yet, hopefully they will soon. And we’ll probably see Juliano Falaniko, and maybe early enrollee Kana’i Mauga.

socallvr
Garry,
How solid of a commit is Tuli Letuligasenoa? I see he is visiting Utah at the end of this month and it seems like his recruitment has been very quite. Do you know how his USC visit went? I think this kid can be a real force in the middle of the dline and I really hope we land him.

I still see him as pretty solid. He took his official visit last weekend and said he felt right at home being hosted by the group of Polynesian defensive linemen. Tuli hasn’t played any real games with the recruiting process and I don’t think the Utah visit is playing games with the Utes, he’s built a good relationship with the coach there and will take the trip. Of course, Utah is also known for success with Polynesian defensive linemen so you never know what can happen in recruiting but it doesn’t feel that way on this one.

big_pete
Garry, does Coach Helton and his staff do a good enough job of communicating with the media and the USC faithful? How does his staff compare with past regimes?

I don’t know how they could do much more with how many media demands are on their plate. Helton is also on the higher end of coaches who give you something with his answers, he doesn’t dance around topics too often. Carroll was the master of giving you a long detailed answer but at the end you realized he didn’t actually tell you anything. There were also times, however, where Pete was as good as I’ve ever dealt with in terms of making his case, and there was no better example than when the Trojans got left out of the BCS title game and ended up in the Rose Bowl to play Michigan, Pete simply said “we’ll go win the AP title and that’s a national title” and everybody bought into that.