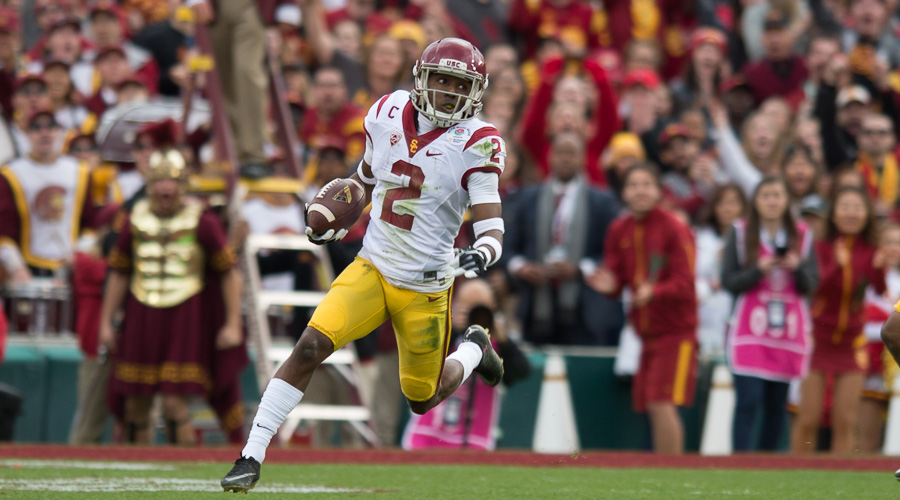 In this edition of the mailbag we discuss the pending decision from Adoree’ Jackson, recruiting and potential JC help on the front seven:

If Adoree stays, how if at all does that help with recruiting?

One guy it might help with at this point is Deommodore Lenoir, a corner who has some of the similar versatile skills that Adoree’ brings to the table. Lenoir and Adoree’ had gone back and forth on social media recently about doing back-flips together as teammates, and obviously the only way that happens is if Adoree’ stays next year. We’ll see. Of course, Adoree’ has already made his biggest impact on recruiting with his play on the field.

We hit the grand slam if AJ stays. Looking for the update who visits this Friday

I agree, it would be big if he stays. Here’s the updated visit list for this weekend.

Gary: every year recruiting is such a battle. I have noticed universities like Alabama, Ohio State, Michigan etc have a large staff of analysts dedicated to watching film and communicating with recruits. These schools continue to get their share of top 100 recruits each year. Can you expand on the advantages or deficiencies in our atheltic deptarment when it comes to recruiting?

The Trojans have a support staff that is involved with all the items you discuss. Whether that staff is as large as Alabama or Ohio State, it probably isn’t, and that will be up to Helton to decide if he wants to address that. So far I think the results have been pretty good in the recruiting department for Helton, last year saw a great close and things are poised for that to happen again this year. The next step will be getting back to having a top 2-3 class every year, and that usually happens when there is consistent winning.

Garry, everyone here knows how Stevie T’s maturity and experience helped anchor the defensive line this year by becoming a leader during games, in the locker room and on the practice field, who better to help sell USC to the visiting defensive line recruits visiting over the next three weekends. Minus his Senior Bowl weekend, have you heard if Stevie will still be on campus and available to help host Jay Tufele and the other incoming DL recruits?

I’m not sure of Stevie’s availability for the recruiting weekends but he has certainly already set an example of what is possible for a guy like Jay Tufele. It speaks volumes to a defensive tackle recruit from Utah to see a guy like Stevie succeed the way he did, and to get opportunities such as the Rose Bowl, the Senior Bowl and graduate school.

Garry, do you expect a few, or more than a few surprises on signing day? Specifically, do you see us landing just the uncommitted high-profile guys we are following, or do you see us reeling in one, two, or even three big fish who seemed a lock for somewhere else before our big Rose Bowl win? I’m feeling we have a lot more clout then we did even after the UDUB win. Fight on!

History has shown that we should be prepared for some signing day surprises, as this staff showed us last year by filling 7 open spots in impressive fashion. And I agree that the Rose Bowl will help pay dividends. I look at guys like Joseph Lewis and Greg Johnson as being two local guys who could help be swayed by that win, or maybe it helps show a Josh Falo how there could be a role for the tight end in this offense. Helton and the staff couldn’t ask for more momentum as they hit the recruiting trail.

Garry, what is your prediction for the starting receivers next year?

Michael Pittman and either Josh Imatorbhebhe or Tyler Vaughns at the outside spots, and Deontay Burnett in the slot. I’m giving Pittman the nod considering he was the one who played this year, and that experience should give him the edge. Imatorbhebhe and Vaughns are both good. I think Deontay holds off Steven Mitchell when he returns because of Deontay’s ability to navigate the middle of the field, we saw that pay off in the Rose Bowl.

Garry, what’s your feeling on possibly hitting on 2 of the 3 big dlineman visiting soon, Tufele, Solomon, and Kinlaw? Have you heard anything on Jacob Lichtenstein’s development this year?

It could be the biggest swing point of this class. If you hit on 2 of the 3 you mention, wow. That would be the finishing touch because I really think things are falling into place elsewhere in the class.

Do you expect Chuma Edoga will be ready for a starting tackle spot next season?

Physically, yes. I don’t have any questions about Chuma in that regard. The biggest thing for him is going to be mentally handling the role and the responsibility that comes with needing to be out there on a full-time basis. It’s something he didn’t always handle well early in the season when he had a bigger role.

Garry, is Sam Darnold fat? Some posters on TOS have asked that question. haha.

Here are some of the things I know Sam Darnold is – a Rose Bowl MVP, an Archie Griffin award winner, a conference freshman of the year and a bona-fide Trojan hero.

Garry: Its clear we need immediate help upfront on D. Any JCs or grad transfer (a miracle like Stevie T. would be nice)? Others who help and step up from the 2s & 3s? ILBs, DLs are thin. O-line same. Thx, KB

I will give two JC names Kevin: DT Javon Kinlaw is a 300-pound potential nose tackle, while LB Gary Johnson is a guy who could seemingly walk in here and compete right away for the open spot vacated by Michael Hutchings departure. I haven’t heard any rumblings on grad transfers yet but I would gladly take another Stevie T if that option is presented to us! One guy I think you’re going to like as we go along is Jordan Iosefa, real physical kid in practice.

Is Swilling being recruited as a LB or RB?

Bruce Jordan-Swilling is being looked at primarily as a linebacker.

Garry, when are you going on vacation?

The day after signing day.

Garry, will we make the playoffs next year?

They will be projected to, at least on paper. I think when the pre-season rolls around the Trojans will be among the top 4 on most rankings which means, if the rankings hold, that they would be a playoff team. Of course, lots of football to be played between now and then but it’s nice to be in that conversation again.

Garry can Oregon flip Carr? What is your gut feeling on this?

No, I don’t think they can, I think Stephen will be a Trojan. He’s got two 7-on-7 teammates who are Ducks (Graham and Redd) so they have been in his ear about a visit but in the end Stephen wants to be an SC tailback, and you can’t be that at Oregon.

In your opinion, which potential OL/DL recruits have the most upside potential? What are our chances of landing them, and how quickly do you think they can contribute?

For the OL I will say Wyatt Davis, who the Trojans are trying to flip from Ohio State. I think he’s the kind of guy who could compete immediately for the starting spot at LG. On the DL, I’ll say Jay Tufele. Maybe it’s the residual good impact of Stevie T but I like the thought of another 300-pound Polynesian from Utah in the middle of the Trojan d-line.

I am most happy for Leon McQuay, who started his career at USC by “stealing” an early enrollee spot that angered a lot of local folks. After years of abuse by many on this website, his last play setting us up for the win is incredible. Did you get a chance to talk to him since the win?

Very happy for Leon to see him save his best SC moment for the final minute of his career. I didn’t get a chance to talk to him afterwards but nobody had a bigger smile on his face in the locker room than Leon did.

What is your take on the Chargers landing in LA?

It’s a shame things couldn’t get worked out in SD because those fans were pretty loyal to the team. I don’t think the Chargers are going to find a similar passion waiting for them with the LA fans.

Garry….My gut is telling me Adoree stays one more year…what does your gut say?

A lot of rumor winds are blowing in that direction HOT, would love to see it happen.

Does Steven Mitchell have any eligibility left? I was wondering what all the talk has been about him playing this season. Medical redshirt? I thought he was done.

Steven was a redshirt junior last fall, has one more year of eligibility left.