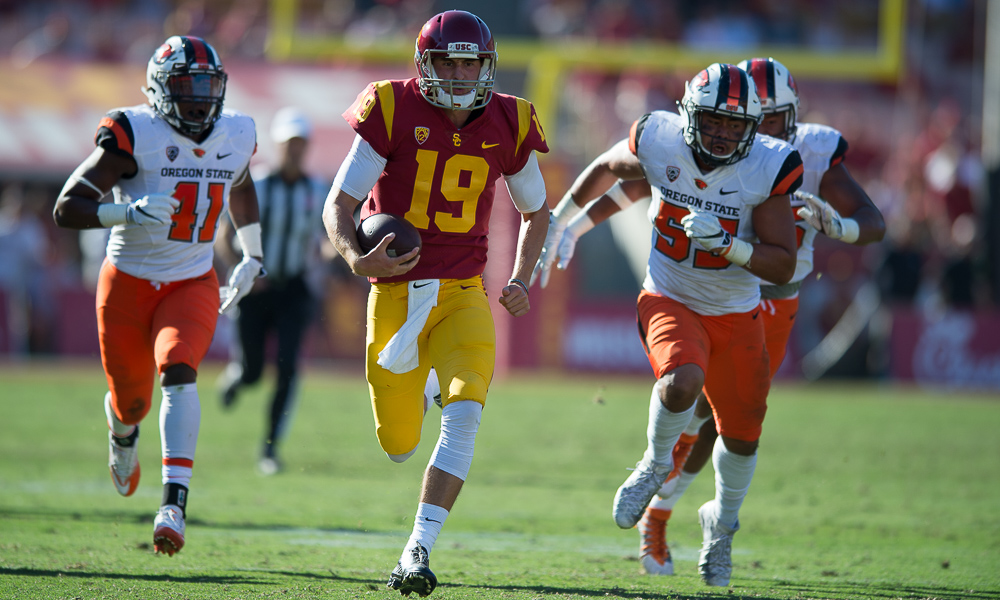 Arhedge
Garry, I’m sure you have plenty of off-the-record conversations with former players and other knowledgeable observers who care about the program. I’m not asking you to disclose names, but I am curious if there seems to be a consensus with the former players and other knowledgeable people you talk to about Clay Helton, his staff, and the state of the program. If so, what is it?

One common theme that I’ve heard from a lot of former players really came to a head after the Notre Dame game, and that revolved around the concept of physicality and toughness as the foundation of the USC program for decades. It comes up a lot when former players watch practices, and it came up again in the Cotton Bowl when a suite full of Trojan legends (Lott, Allen, Munoz, Ellison) found themselves in a room with Lynn Swann as the Trojans were coming up short in another match-up with a blueblood opponent. These are not the kind of results those players are used to seeing in those games, not just on the scoreboard but in style of play, and that’s the biggest takeaway I would say from what I’ve heard.

Cyrus
Garry, Did Jonathan Lockett and Olajuwon Tucker get redshirted last year? if so, are they coming back for their redshirt senior season, or are they being nudged to go to open scholarships for new recruits?

There haven’t been any announcements from the school on redshirts. As far as we know both players are planning on being back but there are issues (Lockett – hip injury, Tucker – academics) which could result in them not coming back. As you allude to, with the team being up against the 85-man limit those are two spots that could be in play.

cheparro
Garry: We have a large and uber talented stable of wide receivers but somewhat short on corners. Is there any plan by Clay to switch one or more WRs to CBs (especially if we don’t land ITS and/or OG)? WR skills translate well to CB and I’d hate to see us lose any of our talented WRs to transfers because they are not seeing the field. Switching to CB could be a positive career move. The NFL salivates over productive CBs while WRs are, with a few exceptions (JuJu for eg.), pretty much fungible.

There’s always a chance Pie Young could shift back to defense. I don’t think the path to playing time is an easy one for him at slot receiver so maybe he takes his chances on defense again. Trevon Sidney has shown some good things in practice with his acrobatic grabs but, with the same logic at a crowded slot receiver position, I think Trevon is talented enough at corner to earn playing time if he wanted to make the move.

Rigged4fun
With the loss of Sam Darnold, do you think we will again use an uptempo running game with Fink?

If Fink wins the job I do think we would see more running from the quarterback spot. But then again, I think Sears and Daniels are more than capable runners too.

gubo&palanka
How close do you think we are to Alabama and Georgia– or to being a playoff team?

As referenced in the first question from this mailbag, I think the main difference can be found in the foundation of physical play and we’ve seen that difference a few times in the last two years with Alabama, ND this year, and Ohio State on our offensive line (d-line matched up well). The history of the USC program has always been that we’ll match-up with anybody in the country when it comes to bringing a physical style, and I think getting that foundation back is the key to being back in that mix.

Fourthseed
Would you care to critique Daniel I’s Cotton Bowl performance? I thought blocking was one of his strengths and it sure looked like he had a tough night against OSU.

In fairness, there were a lot of Trojan blockers who had a tough night against that Ohio State front. With Daniel, as good as it was to get him back for the final month of the season I just don’t think we ever saw the same 100% healthy player we saw the previous year. I don’t know how much that impacted his blocking or ability to get downfield but it simply wasn’t at the high level we had seen before or we’re hoping to see again after he returned from his lingering injury. Hopefully the time off in the off-season will allow him a true return to form.

TrojanRider4Life
Garry… now that the Rams season is officially over, when does the construction start on the new tower? Time lapse cameras to show progress?

Construction began on Monday this week, the day after the Rams season ended. I haven’t seen any time lapse cameras but here are some photos:

Recap of Day 1 of Coliseum Renovation Demo – field cover stated going down, excavator chomping away at seats/concrete, and seat demo. @hdcco is getting after it @lacoliseum. pic.twitter.com/ZspNlUaoY5

Rainman44
Stephen Carr never really returned to form from his foot injury. He was really a non entity in the last half of the season. Any thoughts, concerns or insights on this?

No real concerns, primarily because of what we saw on the practice field over the last few weeks where he was back to his early season form. It didn’t translate as much to games down the stretch but part of that was because of RoJo playing so well and there wasn’t a ton of opportunity for Stephen. There will be opportunity now, that’s for sure.

crank31
With Falah graduating, who do you see competing for Center next season?

With the news earlier this week that Toa Lobendahn is coming back I would expect Toa to get the first shot, and I think he will end up being the starter. if Toa ends up at another spot, the center competition would be between Cole Smith, Bret Neilon and Justin Dedich.

BigDaddy
Would you be able to comment on how much direct impact AD Lynn Swann has on the coaching staff hiring and letting go? Would Helton be able to utilize this influence to ease the transition of someone leaving the program?

Lynn said after the Pac-12 title game that he would not tell his coaches who to hire or fire, that is the job of the coach. But we also know that Lynn is an active voice with Helton about the direction and playing style of the program, and it’s safe to say that Lynn isn’t 100% in agreement with the style of play that he saw this year. Could those feelings from his boss impact how Clay makes any coaching decisions? Sure.

I’m guessing you missed this one

SC1952
How would you compare Fink and Sears? In what areas do you think each needs to improve upon to be an effective starter.

Both are very competitive guys, that’s the first thing that jumps out. One thing I noticed about Fink this year is that he started to become a little more vocal in his leadership, a sign that he’s been around the program a few years. Most people are going to remember his run against Oregon State as an example of what he can do, and it was eye-opening. Matt is a terrific athlete and his arm is strong but if I would say anything that needs to be improved on it would be his accuracy on a consistent basis. I’m anxious to see Jack in spring. He’s one of those guys who just seems comfortable playing the position and I want to see how that translates now that the competition is here for an open spot. Based on everything we’ve seen from him I’m anticipating that he’ll be ready.

big_pete
Garry, please tell me that the days of the pistol offense finally going to be behind us?

I don’t see any signs of that. You have both Helton and Tee returning for the offensive brain trust, and one of the reasons Helton is going with Ellis is to help make it a seamless transition from the QB coach role.

MenofTroyNJ
Garry best guess on Green Marshall and Tell staying or going to the draft?

Right now the rumor winds for all three are in the direction of staying. Hope that holds true.

Garry, if Toa does indeed move back to C (which I think is a great move), what do you think our starting OL looks like against UNLV? Looks to me like we’ll get 4 starters back, and will only need someone to fill into the LT spot. Is Austin Jackson the best guess?

Yes, that would be my projection for the line.