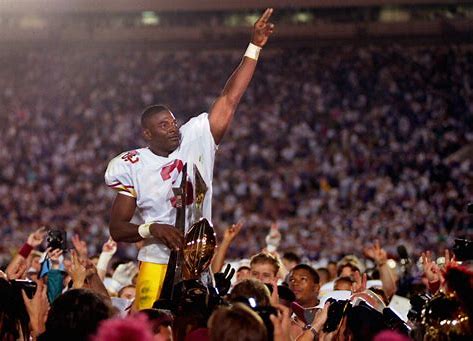 It was quality over quantity when it came to the wide receivers fans selected for the WeAreSC All-Time Team.

Keyshawn Johnson and Mike Williams are the selections, despite both having played just two years for the Trojans. It’s a testament to their ability to dominate on the field, as neither ranks in the top five for career receptions or receiving yards. But while the longevity wasn’t there for either, both could take over a game from the wide receiver position.

Johnson finished his USC career with 168 receptions for 2,796 yards (ninth all-time at USC) and 16 touchdowns. He saved his best for last during both years at USC, as he set a Cotton Bowl record with 222 receiving yards on eight receptions, to go along with three touchdowns, on his way to offensive MVP honors in the 1995 Cotton Bowl Classic. The following year, Johnson was named Player of the Game for the 1996 Rose Bowl when he caught 12 passes for a Rose Bowl-record 216 yards and a touchdown, in a 41-32 victory over Northwestern. Johnson was elected to the Rose Bowl Hall of Fame in 2008. Johnson sits in fourth and fifth place on the USC single-season receiving yardage list and his 102-catch season in 1995 ranks fourth all-time at USC.

It’s amazing to think of what Williams accomplished at USC in only two seasons, and scary to think about him as part of an undefeated 2004 Trojans team. There is such a big “what if?” surrounding that missed year for Williams, who tested the NFL’s three year rule for players leaving college early and was not granted access to the NFL Draft, and was also not permitted to return to college football, forcing him to miss the 2004 season completely.

At with a hat tip to the new Air Raid offense at USC, it only makes sense to take a look at what a five-wide formation would look like based on the voting. In that situation, Williams and Johnson would be joined by Robert Woods, Marqise Lee, and JuJu Smith-Schuster. That gives WeAreSC All-Time Team quarterback Matt Leinart the Nos. 1, 2, and 4 career reception leaders to throw to.

The fact that Dwayne Jarrett is left out of the mix is a testament to the loaded nature of the wide receiver position of late. Jarrett is USC all-time leader in receiving touchdowns (nine more than second place) and ranks third in both career catches and career receiving yards. He’s also part of one of the most significant and memorable plays in USC history, as he was on the receiving end of Leinart’s fourth-and-nine pass to help beat Notre Dame in 2005.

Now we’ll move the team selection on to the offensive line, another position where there are few correct answers due to the overall talent level and depth at virtually every spot. We’ll see who winds up paving the way for the skill positions.

Here is a look at the team to this point.