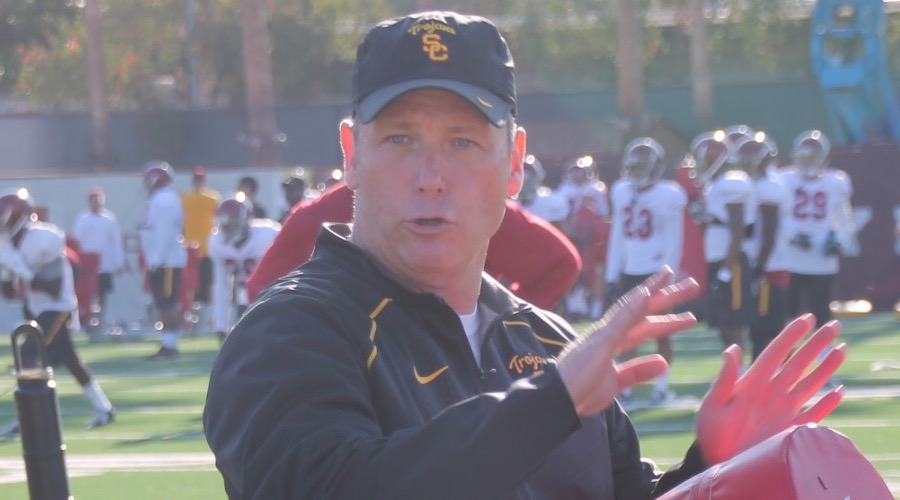 In this week’s edition of the mailbag we discuss Porter Gustin, Stevie Tu’ikolovatu, Clancy Pendergast, Osa Masina and more:

Garry is everyone eligible to this season? Heard that a couple Returning players may not be.

Helton said he will have grades from summer school confirmed today (Thursday) and that he doesn’t anticipate any issues. He will give an update after practice today.

How is Ej Price looking so far in camp?

Very good. You can make a case for him being the most impressive freshman so far as he has been taking the 2nd string reps at left tackle for the past few days (a spot previously held by Roy Hemsley). E.J. is a big man.

Has Porter Gustin outgrown himself to be an effective edge rusher/predator? He’s a giant!

I don’t think so. Yesterday he had a couple plays which really showed his skills, he got into the backfield on a sack against Zach Banner at left tackle, and later he tracked down the speedy Dominic Davis in the flat with an aggressive tackle.

I would like to piggy-back this question. Would the defense benefit if Porter Gustin was at ILB next to Cam Smith? It would strengthen the middle of the defense. Also, would it make us faster on defense in Masina were to play OLB? Who is quicker Masina or Gustin?

The pairing of Gustin and Smith would probably be very impressive. Obviously the coaches see something to have Gustin and Masina in their current spots but I think both are talented enough that each would do well if they switched spots. Masina was originally listed as an edge rusher in spring and I thought that made a lot of sense.

Any chance we see Rector push to start opposite Greene instead of Dorton/as a second stringer behind Greene?

We haven’t seen any sign of that. If anyone is going to slide over to compete with Dorton I think it would be Jacob Daniel from nose tackle, especially when Noah Jefferson returns to pair with Stevie Tu’ikolovatu to give a nice 1-2 duo at nose.

If you think this team is (or will become) more physical this year, tell us where you think it will be the most obvious.

The obvious answer is along the offensive and defensive line. Helton has stressed an increased physicality in the trenches as one of his major goals. But I think the less obvious answer is in the secondary. Pendergast is known for having defensive backs that tackle well and this group has the potential to be pretty physical.

Garry, are there any players on the roster that may not play on Sep 3rd due to injury?

Vavae Malepeai is out for 6-8 weeks with a scapula injury. I think you would have to put Noah Jefferson and Jamel Cook on that list simply because we haven’t seen them yet. Helton said that he hopes to have Jefferson return by the second half of camp. And hopefully the Chad Wheeler situation that popped up in the last couple days with plantar fasciitis is only something minor.

Have the QBs been working mostly from under center or from the shotgun and from which formation has the running game been most effective?

It’s been mostly shotgun but there has been a certain amount under center. Personally, I would love to see us under center more but I will take what I can get right now. Yesterday we saw a couple nice Justin Davis runs in a red zone drill when the QB was under center.

Garry- is stevie T good enough to start at NT ? if so, isn’t starting DL of R Green, Stevie T and Noah jefferson (NFL sized !) plausible ? I didn’t see any team pushing these guys around if they are healthy do you ? Green and jefferson at DE are a matchup nightmare for opposing OL for sure

Stevie is definitely good enough to start at nose. And it will be interesting to see what happens when Jefferson comes back, if he stays at nose (you would be strong all day in the middle with Stevie and Noah as a 1-2 duo) or if he does move over a spot. If everyone is healthy I would put my top 3 interior guys as Green, Jefferson and Stevie so that is a good case for getting those three on the field together.

First time asking a question, I will be heading down for the big game Sept 3rd. I was wondering do anyone know where the good hang out spots will be before or how much is tail gating party? I am from Maryland I love USC…

Enjoy the game. Check out this link for tailgate info:  http://www.tailgatetavern.net/

Can you give us a rundown of your observations as it pertains to the coaching staff and them teaching the fundamentals? Is it the best we’ve seen since Carroll ?

I think we need to wait and see the results on the field before we can really judge but I like so much of what I see in that regard from this staff so far. They are a group of teachers who seem very focused on fundamentals and I think a lot of that can be traced to Helton because that has always been his coaching style and he’s surrounded himself with coaches who are similar that way. He was a good soldier as an assistant coach and he’s got a lot of good soldiers with him now.

Regarding the offense, the objective is clear (be physical). it seems the pieces are in place to have a very respectable offense (even with a new QB). With that, do you see any “secret weapons” (or maybe better said as “overlooked weapons”) on offense? Specifically, any players who’ll surprise from time to time in certain situations?

The first name that comes to mind is Dominic Davis. I don’t know how many touches he’s going to get in that crowded backfield but he brings a different brand of explosiveness when the ball is in his hands and I do see him getting a chance from time to time.

Garry …with the big week or so in recruiting ( Burgess, Echols, Vera-Tucker,and Free commits), does this get the attention of other prospects? Thinking this could be a special class, and don’t want to be left out? Also…..will the Trojan add one more OL if someone like Leatherwood wants to commit?

Yes, I do think it gets the attention of other recruits because good players want to play with good players, and the Trojans added some good ones here. You are also correct in that the available spots are dwindling and the uncommitted players notice that too. I see four players on the offensive line and I’m still looking at Austin Jackson as a strong possibility, and I would even take a fifth on the line if someone like Leatherwood wanted to come.

You can’t rule it out. Clancy led USC to the top conference spot in his first year here, and he also did it the first year he was at Cal. His presence is a big part of my optimism for the defense this year.

Last year Osa Masina struggled with a tweaked hamstring that continually held him back from competing like he wanted to. It has hard to gauge how good he was because he just couldn’t shake the injury bug. A) Is he fully recovered? B) His name hasn’t been mentioned much in practice reports. How’s he looking?

I think Osa has put together several nice practices in a row. He’s been primarily lining up with the 2’s at ILB (a lot of the time with Cameron Smith) and he’s been pretty active as the full pads have come on. I do think part of his progress has been getting healthy and I’m anxious to see where he ends up by the end of fall camp.

1) Any idea what to really expect from Houston and Jefferson in the way of contributions this year, being that they are still battling back injuries? 2) Any possibilities we see Jalen Greene used situational in the Wildcat formation?

1) Houston is going through everything right now but he’s the 6th man in the rotation at ILB and I don’t know how many opportunities there will be for production this year. Maybe he gets a chance to make a mark on special teams. I’m definitely encouraged by what I see from him as he is coming back. As far as Noah, we should find out fairly soon. As mentioned above, Helton hopes to have him back for the second part of camp. That would be huge because I think he has a chance to be one of our biggest contributors in the middle. 2) Yes, Helton has shown in the past that he’ll use Jalen in that role and it’s certainly possible we will see it again.

Will a true number 2 receiver emerge by the start of the season? Or, will it default to a committee with players being used situationally?

I think both Darreus Rogers and Steven Mitchell are capable of being that #2 guy, and they offer differing styles to complement JuJu in the starting rotation. They’ve each had high expectations that haven’t always been met in their SC careers but both are looking very polished right now.

Is there any way to see Porter and Wole on the field at the same time?

I’m sure there will be times in the rotation of a game where that will happen. They play on opposite sides so that would allow them to be on the field at the same time, right now Oluwole is backing up Uchenna Nwosu while Porter is a starter. But the more Wole is inserted at various points in a game the more he would play with Porter.

Who is most likely to redshirt from the WR class that just came in?

I would love to redshirt all of them if possible but that won’t happen. Velus Jones is probably the only definite redshirt from what I’ve seen. I would say Trevon Sidney is next, his athleticism is there but I would just love to see him bulk up a little. In terms of the group of Vaughns, Imatorbhebhe and Pittman it’s hard to call just yet. There is also the possibility of looking to redshirt someone like Isaac Whitney or De’Quan Hampton, in order to have their veteran presence in 2017.