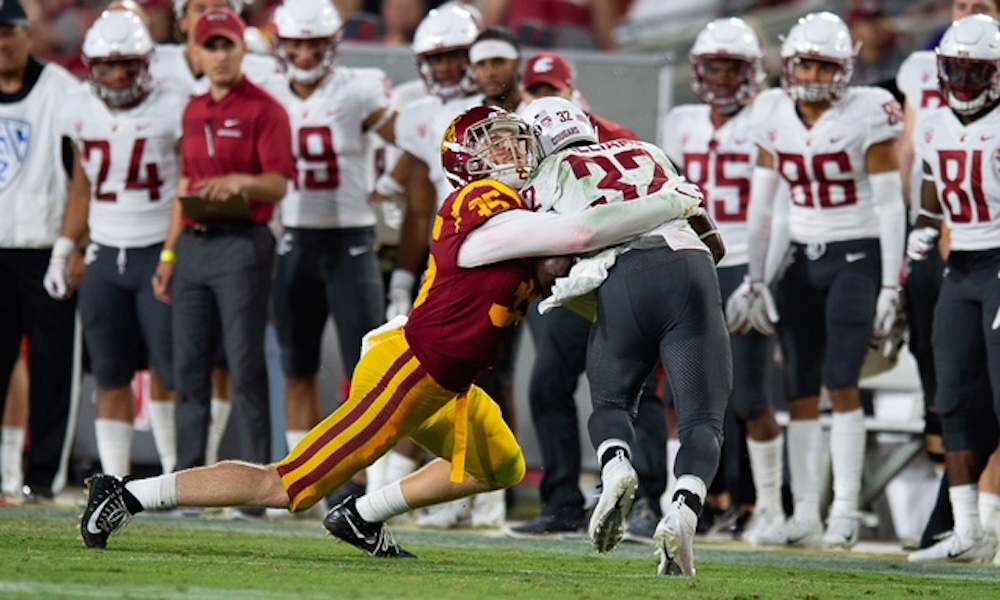 There were plenty of concerns surrounding the USC football program after the last two weeks that saw road losses, a general lack of offense and the inability to respond when opponents pulled away in the 2nd half.

We’re not here to say that all of those issues have been wiped away with the Trojans 39-36 victory over Washington State but for one night it was a performance the program desperately needed.

It was clearly the most complete offensive production of the season. The Trojans opened with a 5 play, 75 yard drive (all on the ground, including a 50-yard run from Stephen Carr) to open the scoring with a short Vavae Malepeai touchdown run. Both Carr and Vavae ended up around the 75-yard mark for the game as they got the bulk of the carries with Aca’Cedric Ware nursing a knee injury, and it was just enough to be a consistent factor throughout the game.

It was also the best game from Trojan freshman QB J.T. Daniels thanks in large part to the fact that the Trojans stayed committed to the run the whole game. Without a run game we saw J.T. throw the ball 48 times last week and it didn’t work, in this game he threw 26 balls and completed 17 of them for 344 yards and three touchdowns (no picks). Daniels spread the ball around and four USC receivers had a catch of 21 yards or longer. It was a 44-yarder to Velus Jones that helped set-up a touchdown pass from Daniels to Tyler Vaughns, and only a questionable call that went against Michael Pittman prevented a late score for the Trojans just before half (I’m not saying he was clearly in or out, it was close, and it wasn’t the only close call that went against the Trojans tonight). It was notable that the Trojans won a lot of jump balls, or got penalties called their way on them.

The first half also saw the USC defense challenged by Cougar QB Gardner Minshew, who was definitely a good fit for the quick hitting Mike Leach offense. While Minshew had success (he ended the game with 37-52 for 344 and three touchdowns, and wasn’t sacked) the Trojans showed early on that they were going to make plays as well, with early game pass break-ups from Malik Dorton, John Houston and Levi Jones.

The third quarter opened with a WSU touchdown to extend their lead to 30-17 and suddenly it looked like it could be a repeat of the past two weeks. Instead, Daniels hit Pittman down the sideline for a 50-yard score and followed it with a beautiful TD throw to Amon-Ra St. Brown which showcased the chemistry between the two, and the score was 31-30 in favor of the Trojans. The scoring wasn’t done, however, as Washington State added another touchdown to go up 36-31 but it was the Trojans who finished the scoring with another short Vavae touchdown run, and an amazing two-point conversion throw by Daniels to Vaughns in the back of the end zone. The Cougars made one more march down the field but a field goal attempt that likely would have sent the game into overtime was blocked by Jay Tufele to preserve the win.

Notes from the game

* What is it with safeties not being called our way two weeks in a row? The kick returner for Washington State fumbled the ball and the tip of the ball was clearly over the goal line, it’s hard to understand how they miss a call like that….again.

* The announced crowd of 52,421 definitely brought the support for the team when they needed a good home atmosphere. Said Clay Helton “I can’t thank the fans enough. To be able to come home and have the support of the Trojan Family was huge. This is what family is all about and they support a bunch of great kids and I appreciate that.”

* On the final USC scoring drive did you notice the I formation and use of Brett Neilon as a fullback in #99? It was worked on last week in practice and it goes without saying that longtime Trojan fans of that formation would love to see it return more.

* What does it say about Cameron Smith that he gets 15 tackles, 12 of them solo, and it almost goes unnoticed? It says Cameron has set the bar pretty high in his career. Enjoy him while he is here.

* It will be interesting to see where Washington State finishes the season. The Cougs are good, although certainly better on offense than defense, and they had no fear of walking into the Coliseum to face the Trojans.