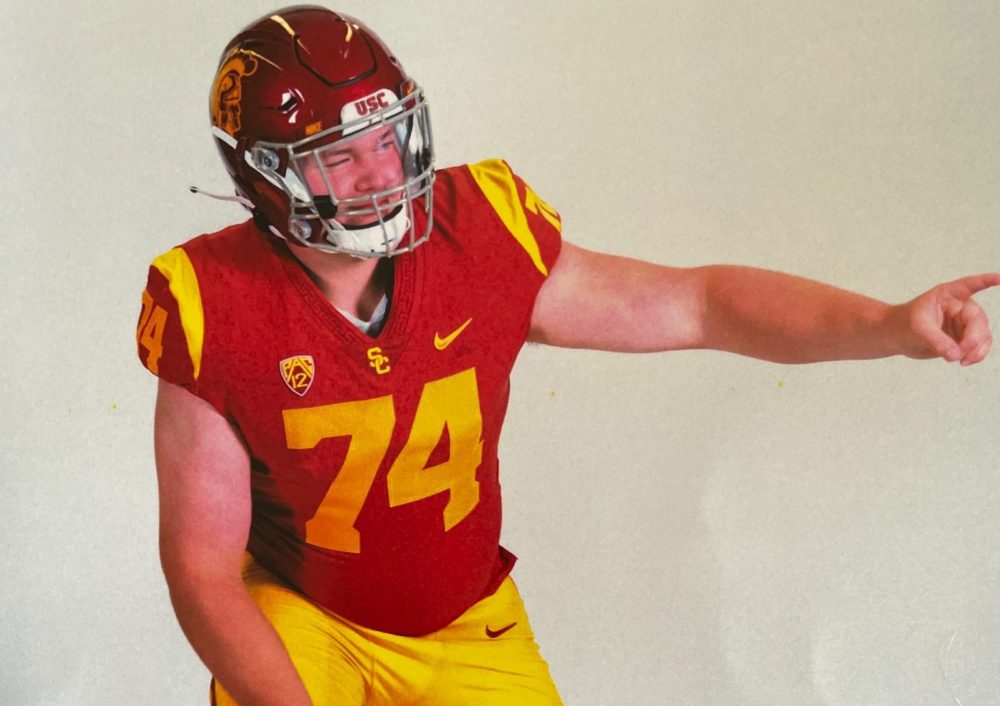 On Tuesday evening, the USC Trojans finally got their first offensive line commitment for the class of 2022 when three-star tackle Keith Olson (Napavine, Wash./Napavine) posted to Twitter that he had committed to the Trojans.

There has been tremendous scrutiny on the Trojans’ offensive line recruiting, especially under first- year O-line coach Clay McGuire. With the Trojans offensive line recruiting under the microscope in recent years for its lack of quantity of high-end talent and the inability to lure a NCAA Transfer Portal offensive lineman of quality, all eyes have been on the O-line while the other USC position groups seemed to be gaining significant steam in a positive direction.

Before committing to the Trojans, Olson had offers from Boise State, Cal, Oregon State and Utah. He has good bloodlines as Olson is an Oregon State legacy, the son of former Oregon State linebacker Kurt Olson. The common thought was that with that Beavers legacy, OSU was in a good position to land the propsect.

In terms of recruiting rankings for the class of 2022, Olson is currently rated as the nation’s No. 90 offensive tackle and the No. 18 player in the state of Washington.

The Trojans made a huge impression on Olson as he raved about Trojans’ offensive line coach Clay McGuire. Probably as important as any aspect of his decision, Olson liked what we saw of his future offensive line teammates and the way he was accepted.

Showing great admiration for McGuire, Olson told The Chronicle, “Every O-line coach, they’re all great guys. Coach McGuire, he knew the Washington area pretty well and we got along pretty good. He’s a small-town guy.”

McGuire was once an assistant at Washington State under former head coach Mike Leach.

During his recruiting visit, Olson found the area and facilities of USC much to his liking.

Olson said, “It’s called USC Village and you walk out of there and it’s like across the crosswalk and you’re at the Coliseum. The Coliseum’s real nice, the facilities are great, the weight room’s good. It’s nice.”

Olson’s commitment should not come as total surprise since he did take an official visit to Troy this past June. He’s a good athlete – plays football, baseball, basketball and throws the discus and shot put. Most evaluators believe Olson has a solid combination of a good frame and feet.

While Olson’s commitment may not reach the recruiting ranking heights that many were looking for, it should be kept in perspective if the Trojans can add other top shelf O-line recruits to this class like Josh Conerly Jr. (Seattle/Rainier Beach), Addison Nichols (Norcross, Ga./Greater Atlanta Christian), Earnest Greene (Bellflower, Calif./St. John Bosco) and/or Devon Campbell (Arlington, Tex./Bowie). The Trojans need to get a commitment from at least two of the three if they are truly going to make a statement in terms of offensive line recruiting.

Olson’s commitment marks the second year in a row that the Trojans have taken a player out of the state of Washington, having signed current true freshman linebacker ∫ from Tacoma to the class of 2021.

It should also be noted that Keith Olson is the first offensive lineman from the state of Washington to commit to being a Trojans since the arrival of Zach Banner from Lakewood.

So, the Trojans finally got an offensive line commitment, but the balance of that class of 2022 offensive line remains a recruiting work in progress, and that will continue to draw cardinal and gold fan attention all through through the December signing day.

Erik McKinney contributed to this story.