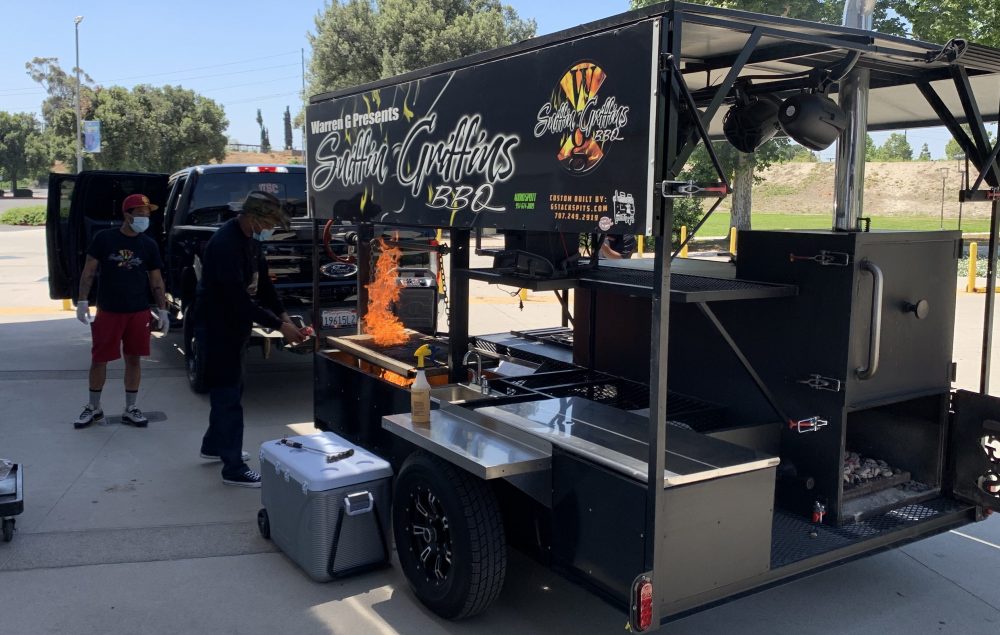 Hip-hop legend Warren G is plenty familiar with entertaining a crowd. But this past Saturday, he put down the mic and picked up some tongs, as he fed dozens of San Bernardino Valley College football players unable to go home during the coronavirus pandemic and some struggling to find regular meals.

The idea was kickstarted by fellow Long Beach legend Merle Cole Jr., a longtime coach at Long Beach Poly who took a position as an assistant coach at SBVC this past January. Cole has served as a mentor to anybody and everybody who has emerged from the Long Beach area over the past few decades, including Warren Griffin.

Cole said that it was during a phone call with Griffin last week that he mentioned some players on the team from out of state hadn’t been able to buy groceries and were standing in long lines at food banks. That was all the spark Griffin needed to light the fire, literally.

“He felt so strongly about doing something for those guys,” Cole said.

Cole ran the idea by SBVC head coach Daniel Algattas, who took it up the ladder through athletic director Dave Rubio and then president Diana Rodriguez. With everything signed off, Griffin hit the road with his barbecue rig, complete with hundreds of servings of short ribs, beef flank, chicken thighs, beans and mac-and-cheese. With safe social distancing practices in place, Griffin was able to feed roughly 40 SBVC players who are still in the area—many who either can’t return home to places such as Hawaii, Florida and Philadelphia either due to travel restrictions or need to stay out of the neighborhood they specifically left to go to junior college.

Junior colleges are able to provide food for players, but Algattas said the football budget is down between $50,000-$60,000 at this point compared to where it normally would be. Local restaurants have often donated meals to the program, but those donations have been down as well during the pandemic as restaurants struggle to survive. Algattas said many of the players who work need to be on the late shift to accommodate school and athletics, and many of those shifts and jobs have been cut back or lost completely.

“Events like this definitely change communities,” Algattas said. “It brings in a sense of that title, those words—it puts the ‘community’ in ‘community college.’”

This isn’t close to the first time Griffin has fully immersed himself into a cause he believes in and looking for an opportunity to help the youth. Most of his giving goes unnoticed as he typically keeps his distance from the attention that could come with it.

Cole said for a period of three to five years, Griffin and his wife purchased prom tuxedoes and gowns for every Long Beach Jordan High School senior. When Griffin’s son—USC cornerback Olaijah Griffin—began his career at USC, the two of them purchased a large number of new socks and handed them out to people on downtown Los Angeles’ Skid Row.

“This is an example right here, a family, a brotherhood,” Griffin said on Saturday. “Just letting people know that we can get through this.”

Saturday’s event was a combination of two of Griffin’s passions—cooking barbecue and helping young people. Griffin said he’s always been a fan of cooking and barbecuing. His father was a cook in the Navy and he said he enjoyed watching him have fun creating recipes and entertaining people while cooking. Now Griffin has his own line of Sniffin Griffins barbecue sauces and rubs, as he’s spent the past handful of years getting into the professional side of cooking.

“I said, ‘I’m going to be like my dad with that, with cooking,’” Griffin said, adding that he’s been cooking since he was a teenager. “It’s something I love doing. The last five, six years, just meeting a lot of good barbecue pit masters and talking to them and they said, ‘ Maybe you should think about doing this for real.’”

Griffin did it for real this past Saturday, as his gesture will have a lasting impact on the players in attendance.

“This is something that’s a great example of how we can help and how these guys, when they finish their college careers and they move onto great things, they will remember this moment,” Algattas said. “This is something that’s special, not just because we’re feeding and nourishing them and we’re able to help their families, but also for the example that it sets for these men who are going to be graduates and moving out and coming back into this community soon.”