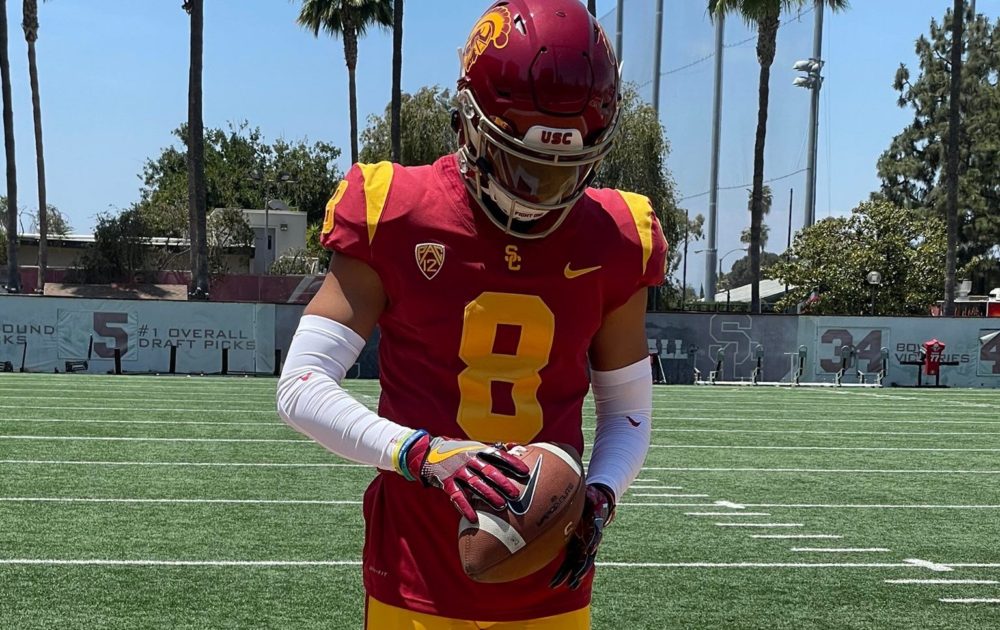 Recruiting is open and visits are back in a big way this June, with prospects from the 2022, 2023 and 2024 classes all hitting the road and trying to make up for lost time building in-person relationships with coaches and seeing what various programs have to offer. Conversations over Zoom and Facetime can give a good sense of a coach’s personality and what exists on campus, but seeing it for themselves is what recruits want to experience right now.

Many recruits wasted absolutely no time in doing so. Tuesday was the first day the dead period that had been in place for more than a year was lifted and a number of prospects made their way to USC.

One of those was 2023 four-star cornerback Jshawn Frausto-Ramos (Mission Hills, Calif./Alemany), a 6-foot, 170-pound defensive back who earned an offer from USC back in September and will be one of many sought-after Southern California cornerbacks in the 2023 class. Frausto-Ramos took the visit along with his best friend, high school teammate and fellow four-star 2023 defensive back, safety R.J. Jones.

Frausto-Ramos said the visit was memorable in a number of different ways.

“In the beginning of the visit, as soon as I walked through the double doors of the building, they had music playing out loud while my family and I were greeted by football coaches and staff,” Frausto-Ramos said. “They made my family and me feel welcomed. It set the mood immediately.”

He said the energy and enthusiasm from recruits, families and the USC staff was palpable, as everybody is happy to be back together and experiencing these important visits and face-to-face interactions after the long, long break.

The recruits got to experience wearing the USC helmet and jersey and taking photos, which has become a staple of every official and unofficial visit. But one of the more important events came at the end of the visit, when Frausto-Ramos got to spend time with USC cornerbacks coach and associate head coach Donte Williams.

“At the end of the visit, I really enjoyed spending time with coach Donte, watching film and breaking film down,” Frausto-Ramos said. “I learned a lot from him. He is extremely knowledgeable and organized.”

Williams has more than lived up to his reputation as a dominant recruiter since his arrival at USC, and he’s keyed the recruitments or a number of top prospects. He has found tremendous success at the cornerback position of late, helping to sign a couple of standouts in the 2021 class, grabbing commitments from five-star Domani Jackson (Santa Ana, Calif./Mater Dei) and four-star Fabian Ross (Las Vegas/Bishop Gorman) in the 2022 class, and securing visits from more top targets in the 2022 and 2023 classes. He’s been aggressive with early offers to cornerbacks in the 2023 class, and Frausto-Ramos will likely be in the mix for the Trojans moving forward.

Frausto-Ramos holds offers from Arizona, Arizona State, Colorado, Michigan, Oregon State and Virginia Tech, in addition to USC. Oregon State was his first offer more than a year ago and Alemany head coach Casey Clausen saw more coming in, and in a hurry.

“He’s big time,” Clausen said of Frausto-Ramos last spring. “He started as a freshman last year and played some corner and nickel. He and RJ Jones are big time. We play in the second-best league in the state and they played as freshmen. He’s a physical, athletic, long kid–6-foot, 170 pounds and can run. He’s very similar athletically to Jaylin Smith. He likes to be in the action in the run game. He can cover, either drop into zone or play man-to-man.”

Next up, Frausto-Ramos will be at Arizona State on Wednesday and he’ll be attending several camps this summer as well.

It’s going to be a busy June for many recruits across the country, but it’ll be worth it to have a chance to experience these visits.

“RJ and I have always dreamed of this moment, to visit colleges together, ever since we were little kids playing Pop Warner football,” Frausto-Ramos said.