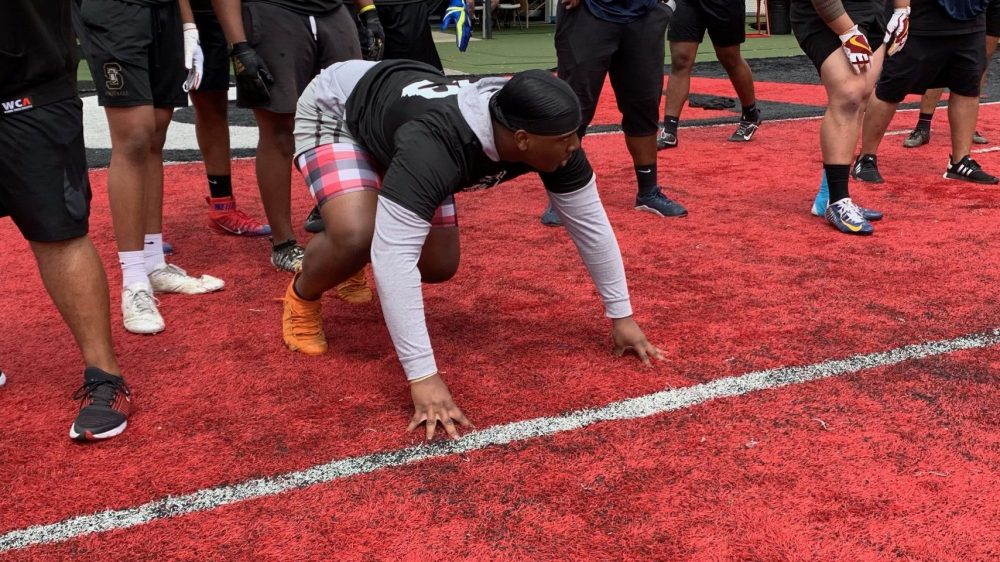 Defensive end Nate Burrell would seem to check all the boxes when it comes to what the USC coaches are looking for in a 2022 prospect. The Trojan staff is looking to “Take back the West” when it comes to recruiting and signing the region’s best players, so locking in on top prospects at the region’s top high schools is a priority.

That puts the four-star Burrell–the nation’s No. 284 overall prospect and a vital member of a dominant St. John Bosco program–squarely in their sights.

Burrell visited USC several times after the new defensive staff was in place and said he has a great relationship with defensive coordinator Todd Orlando and defensive line coach Vic So’oto.

When they’ve discussed their approach to the recruiting process, the USC coaches have spoken about making sure recruiting is not just a one-to-one relationship, instead using multiple coaches to recruit each prospect. Burrell said that approach is definitely coming through, and it’s paying off.

“They do a good job with recruiting,” Burrell said of the USC staff. “They always keep close contact and are making sure you’re okay. They really care about their recruits. It’s more than just about football. They talk to you and see how life is, how your family is doing. It plays a big role.”

The one thing that would seem to hamstring these defensive coaches in a big way on the recruiting trail is the fact that, with many of them being new names and faces to local recruits, there has been no way to display what this USC defense actually looks like in a practice or game setting. But Burrell said that hasn’t been an issue for him, as he has been able to obtain an understanding of what it will look like and how Orlando and So’oto want to run things.

One advantage that USC has for defensive linemen is So’oto’s insistence that all of his players understand how to fit into every defensive front Orlando might run, which means being able to switch seamlessly from a 4-man front to a three.

“For him to know that’s what NFL coaches look at–versatile defensive linemen,” Burrell said. “He wants all his guys to make it to the next level, and I like that about a coach. They don’t want that static player where they can only go in at defensive end in a 4-3. He tries his best to fit you into everything–playing D-tackle in a 4-man front and maybe playing 4i in a 3-man front.”

Burrell prides himself on his versatility along the line of scrimmage. At events this summer, he often bounces back and forth between lining up at defensive end and defensive tackle, testing himself against offensive tackles, guards and centers.

Burrell said he is up to 6-foot-3 and 260 pounds now, as he’s focused on lifting and getting bigger during quarantine. But his quickness and ability to use his hands as a pass rusher means he could see time at any number of position at the next level.

“I can fit into a defense really well,” Burrell said of his positive traits as a defender. “I don’t want to be a guy who can only play defensive end or defensive tackle. I want to be versatile within the whole defense–maybe even get to outside linebacker. I feel like I can fit into any scheme, and fit anywhere.”

Burrell said he feels good about his pass rush game and his ability to stop the run at this point, but added that there’s always room for improvement in every area. He had 55 tackles and 6.5 sacks last season, but saved his best for when it mattered most. In the Division I championship game win against Mater Dei, Burrell had two sacks, an interception and a fumble recovery.

Burrell is California’s No. 2 defensive end, behind Gracen Halten (San Diego/St. Augustine). He’s also one of at least four top targets for USC at St. John Bosco in his 2022 class, as he’s joined by offensive lineman Earnest Greene, running back Rayshon Luke and cornerback Tayvion Beasley. Burrell could also continue a mini-streak of Bosco defenders going to USC, as the Trojans landed Chris Steele and Ralen Goforth in the 2019 class, Kobe Pepe in 2020, and hold a commitment from outside linebacker Ma’a Gaoteote in the 2021 class.

Burrell said at this point he doesn’t have anything close to a top list or a plan to eventually make a commitment, but he wouldn’t hesitate to release that top group whenever he felt comfortable. Several Pac-12 programs have offered, including Arizona State and Washington. Nationally, Michigan is speaking to him often at this point, as is Tennessee.

Burrell said he’s looking for the complete package when he eventually picks a school. He wants to feel comfortable socially, and attend a school that is strong in one of his two potential areas of study–communications or business. He also wants to go somewhere that can prepare him best to reach the NFL. He said depth charts and the makeup of recruiting classes ahead of him won’t have much of an impact.

“I do look at depth charts, but then again, not so much,” Burrell said. “It’s not about who got there first. It’s about who puts in the most work.”