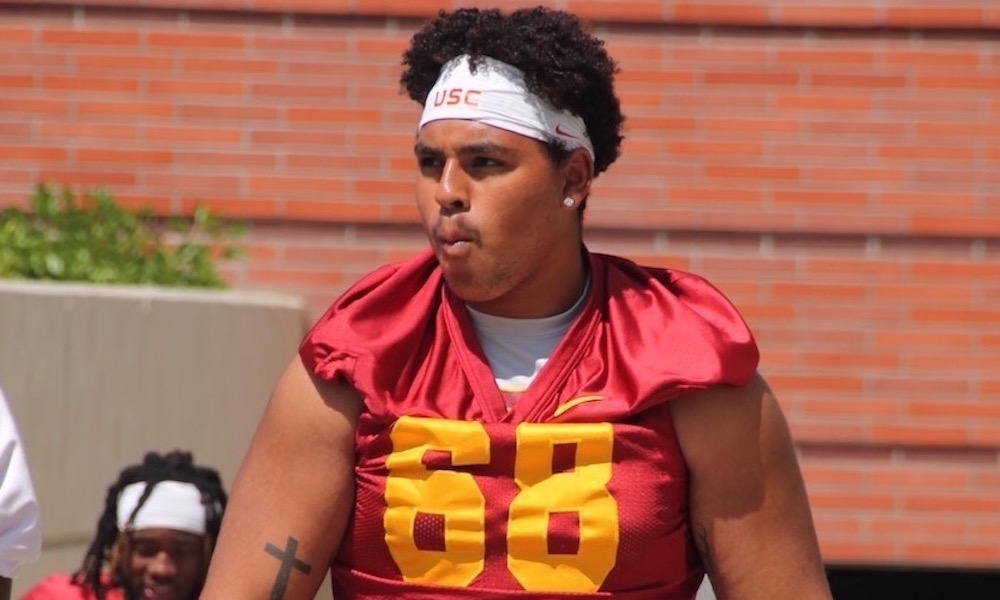 The depth on the offensive line was already an item of concern coming into the spring but when three more linemen transferred out there was all of a sudden a major need for other unproven players to rise up and provide needed depth.

One of the players who will be in that mix is redshirt freshman Alijah Vera-Tucker (6-4, 300) a candidate to be the top reserve at both guard spots. To this point Vera-Tucker has been the #2 right guard behind Andrew Vorhees, while Jordan Austin and Frank Martin have been taking the reps behind Chris Brown at left guard, but Alijah plans to get work on both sides this spring.

“I plan at working at both guard spots,” Vera-Tucker said. “So far I’ve been at right guard but soon I’ll get some work at left guard. I think it’s a great opportunity to show my skills. Last fall I didn’t really get a chance to do that except on scout team but now I’m getting a chance to go with the 1’s and the 2’s so I need to pick my game up and get better.”

To help prepare for this opportunity Vera-Tucker worked on a couple key areas this off-season with the USC strength and conditioning program.

“I think I got a lot more explosive off the ball with my squats and I did a lot of conditioning outside with the speed squads, along with a lot of work on the bench press, which I increased tremendously because that’s my punch. So I feel like the bench and the squats and the team runs have helped me a lot.”

The results have been promising through the first two weeks of spring as Vera-Tucker has held his own, and his focus is on improving his production in the run game, which will be music to the ears of Trojan fans looking to see improvement in that area.

“My goals this spring are to really get into the playbook and then work on my run blocking, and some on my pass protection, but mostly my run blocking because I’ve got to get that down.”