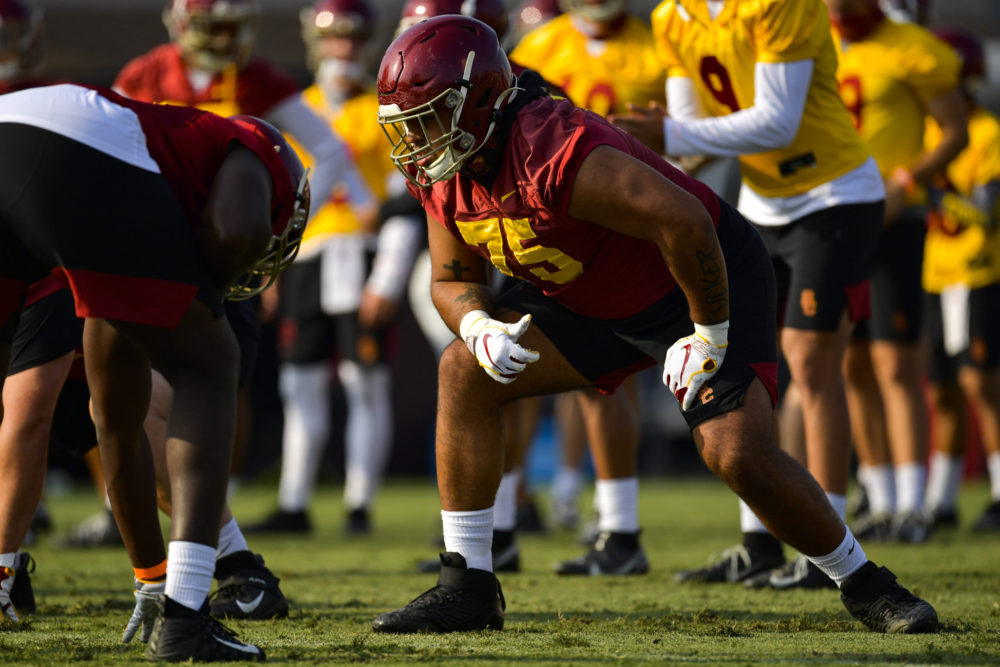 Offensive lineman Alijah Vera-Tucker won’t register a single passing, rushing or receiving yard this season, but he might be the biggest reason that his teammates put up a whole bunch of them. Having lost both of last year’s starting tackles, Vera-Tucker stood as USC’s best option to fill the hole at left tackle and protect quarterback Kedon Slovis’ blindside–something the Trojans didn’t always do so well last season.

It was difficult to imagine the Trojans seamlessly replacing Vera-Tucker when he announced he would opt out of the season in order to prepare for the 2021 NFL Draft. His return to the team, which he announced earlier this week, likely plastered a massive smile across the face of quarterback Kedon Slovis and the rest of the USC offensive skill players.

“From an offensive line standpoint, I think the addition of getting Alijah Vera-Tucker, obviously that’s a big thing,” said head coach Clay Helton. “It provides us a guy that has experience on that left side with a right handed quarterback.”

With Brett Neilon returning at center and Vera-Tucker possessing the ability to slide over from his left guard position out to left tackle, it would appear the Trojans have two of the five spots set. But keeping Slovis upright and the running game effective means finding the right answers at all five positions. Helton and offensive line coach Tim Drevno will have some work to do there, especially since their time was cut so short this past spring.

Each of the past two years, USC has been forced to play three different starting quarterbacks because of the top two being lost to injury. This season, the Trojans have just two scholarship quarterbacks. USC allowed more than two sacks per game during the 2019 and 2018 seasons.

There is a lot of experience in players who could wind up as starters–Vera-Tucker, Nielon, Jalen McKenzie, Andrew Vorhees and Liam Jimmons–and some talent in the wings as well, with Justin Dedich, Liam Douglass and Jason Rodriguez ready to start pushing for significant playing time. Finding the right lineup, as well as the right backups and rotations, will be critical. Even if those eight players are ready to go, it still doesn’t offer a full two-deep. The Trojans lost some depth along the line as well, when offensive tackles Frank Martin II and Bernard Schirmer elected to opt out of the 2020 season.

On Friday, Helton was hesitant to offer thoughts as to how the Trojans would line up along the offensive line against Arizona State for the season opener, or even how they would line up for the first practice of fall camp.

“The way we’ve always approached it, we sign a lot of tackle bodies, so our job is to get the best five on the field,” Helton said. “For us, and where they are most comfortable. We’re going to be trying a variety of different positions for each guy and I think you’re going to have to double-train guys because of injury and because of what we’re going through with this pandemic.”

Helton mentioned getting Vera-Tucker work at both left tackle and left guard, letting McKenzie play both spots on the left and right side, giving Vorhees time at both guard positions, Dedich training at both guard and center and Jimmons at guard and tackle.

“We’re fortunate because our philosophy is to sign–if you’ve seen the majority of our guys with the exception of the center position–they played tackle in high school,” Helton said. “And now we’re gonna have to really take these next four weeks and be able to double-train and find the top five, and what is their most comfortable position.”

Helton spoke last year about how important the staff found it to coach every player like they were a starter throughout the spring and summer. That meant when someone like true freshman Kenan Christon was called on to carry the load at tailback for several weeks, he was ready to go. The same went for Dorian Hewett at cornerback and several other true and redshirt freshmen who were asked to step up at various points.

“It’s really going to be important for us to grow this team from the bottom up, not only because of injuries but because all of a sudden you can have a positive test and that next guy is up like that,” Helton said. “For us, it’s even those six freshmen (offensive linemen) that we signed last year. We’re going to have to train them like they’re getting ready to go start a game, because they could. We’ll have to grow them extremely fast. I’m very confident in our older guys because I’ve watched them play but we’re going to have to grow the bottom up.”

Having to practice in unique ways this fall due to local and state guidelines might turn into a blessing when it comes to getting the entire team ready, and especially getting the young linemen ready for game action.

Helton said that due to the 75-person practice limit, they will be split into four separate practice fields and will divide up by strings. First and second string players will be in a certain area together, with the threes in a different area. That means the entire six-man freshman class could be able to get an entire practice’s worth of reps when typically they might be watching the ones and twos get a bulk of the work.

“I think that’s one of the silver linings of this is the ability to train the entire team from bottom to top,” Helton said. “We are divvying up by strings and using every inch of grass that we have on this campus right now to be able to get it done.”