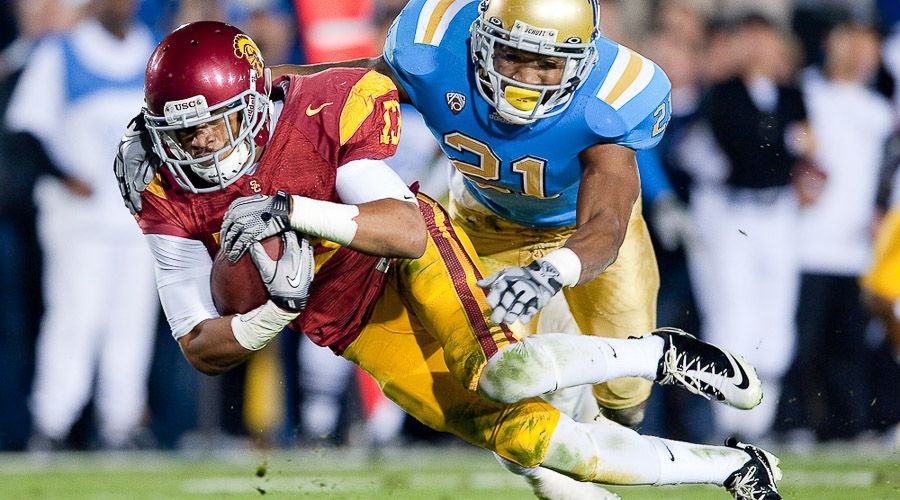 Los Angeles – For most Trojans football fans, November 22 will be the 84th renewal of the greatest intracity city rivalry in the country, the ultimate Southern California football game between the No. 24 USC Trojans and the No.11 UCLA Bruins in the storied Rose Bowl.

However, for baby boomers rapidly approaching their upper oldies, November 22 will always be a haunting memory as one of the darkest days in the history of our great country, the day that John Fitzgerald Kennedy, 35th president of the United States, was assassinated in Dallas, Texas, in 1963.

There was already excitement in the air that November week 51 years ago because in 1963, like today, there wasn’t anything more exciting than a collegiate football game between USC and UCLA, two universities that reside just a little more than 12 freeway miles apart.

In 1962, the Bruins gave the eventual national champions of USC head coach John McKay all his No. 1 and undefeated Trojans could handle, and it took a miraculous, leaping fourth quarter catch by running back/receiver Willie Brown to help insure that the Trojans would eventually defeat the stubborn Bruins of coach Bill Barnes 14-3.

So heading into the 1963 game, there was a lot of anticipation that the Bruins could take it a step further and knock off the defending national champions.

However, all thoughts regarding the 1963 game came to a shattering moment in time the day before the game, a Friday in which the world stopped.

I remember playing basketball at recess at Fremont Elementary School in Alhambra, California, with classmates Jimmy White, Brian Salisbury, Mario Carrillo, and Ronnie Brock. In football, most everybody was Trojans fan and in basketball, thanks to John Wooden, everybody emulated the Bruins basketball team, which featured guards Gail Goodrich and Walt Hazzard.

Fremont Elementary, which is located about eight minutes from downtown L.A. was a special place for athletes, having been the home of late baseball Hall of Fame slugger Ralph Kiner, whom I had something in common, the same 6th grade teacher, the patriotic Mrs. Edith Bloomingdale, wife of former U.S. Naval officer.

An intense blacktop basketball game with no nets on the rims stopped on that infamous November Friday when a student came running out from one of the classrooms screaming hysterically that the president had been shot. Growing up in a politically active family, I immediately stopped playing and ran into a classroom with a black and white TV. In those days, TV and education were considered a no-no unless being used to teach Spanish

Breathless, I came across a number of teachers standing by the television tuned to CBS and legendary newscaster Walter Cronkite. It all seemed so dreamlike. I had always wondered from my previous history classes what it must have been like when Abraham Lincoln was shot, and now unfortunately I was getting it in real time.

All that was being reported over and over again was that three shots were fired at the presidential motorcade and Kennedy had been wounded, perhaps mortally. Cronkite said that Kennedy had been taken to Parkland Hospital from Dealey Plaza where the shooting had taken place.

Instead of lasting memories of Trojans gridiron legends like Pete Beathard, Hal Bedsole, and Damon Bame and UCLA’s Larry Zeno, Mike Haffner, and Mel Profit, thoughts concentrated on the events in Dallas.

While most of Fremont remained at recess as the news was being delivered in that classroom of 35 empty desks, the bell finally rang and everybody returned to their respective classrooms. It was so quiet walking down the halls, as word quickly spread regarding the assassination attempt in Dallas. At least we all hoped it was an attempt.

Upon entering my classroom, Mr. Joseph Abraham Trumpeter Fields, my 8th grade teacher with a thick New York accent, was mute and pale. As we all sat down in those highly uncomfortable wooden desks, Mr. Fields kept the lights off in the classroom although it was totally sunny outside.

Nobody talked. Nobody wanted to talk. Everybody either stared or put their heads on the their desk. Frankly, we were all scared. At that moment, the 1963 USC-UCLA game might as well have been playing on Mars. Nobody cared.

Rumors began flying down the hall that a Russian had shot the president. With the Cold War at its peak, we thought next up will be a nuclear war between our country and the “Reds,” as the Russians under Premier Nikita Khrushchev were called.

Although in reality was just several minutes, it seemed like hours went by with nobody saying a word. In those days, Los Angeles had only seven commercial stations, and all of them were taking the feeds either off CBS, NBC, or ABC. There were no commercial’s – none.

Suddenly and somberly, Mr. Hollis Stoa, another eighth grade teacher walked in to our classroom and matter-of-factly said, “He’s dead.”

What had been a quiet classroom came quiet whimpering, then sobbing, and then just plain crying of emotional pain. Mr. Fields put both hands over his face to hide his emotions and wept. It was all too surreal.

Upon getting home, instead of talking about the USC/UCLA football game scheduled for the next day, my UCLA dad and my USC mom didn’t say anything. We all gathered in front of the television and tried to make sense of it all. The country was told that Vice President Lyndon Johnson had been sworn in as President and was flying back to Washington D.C. along with the casket carrying President Kennedy.

While the country and the world were in a state of shock, suddenly the USC/UCLA football game was pointless given the circumstances, but how would it be handled?

John McKay was adamant that no game be played and that it should be moved to another date. UCLA and the Coliseum Commission agreed, so the game was moved back until November 30. How ironic that the Coliseum was also the same site that Kennedy accepted the Democratic Party’s nomination for president in 1960.

For the record, the Trojans handily defeated the Bruins a week later, 26-6, before 82,460 in the Coliseum. The game was probably a therapeutic distraction from the events in Dallas a week earlier, but the pain of November 22 wasn’t going away anytime soon whether you were a Trojans or Bruins fan.

So now a little over two generations later, the Trojans and Bruins will have at it on a November 22, and for most attending in the Rose Bowl there will be little to no hint of that dark day in Dallas so long ago.

But for those who lived it back in the day, forgive us for closing our eyes for a moment at Saturday’s kickoff in the Arroyo Seco and giving pause.