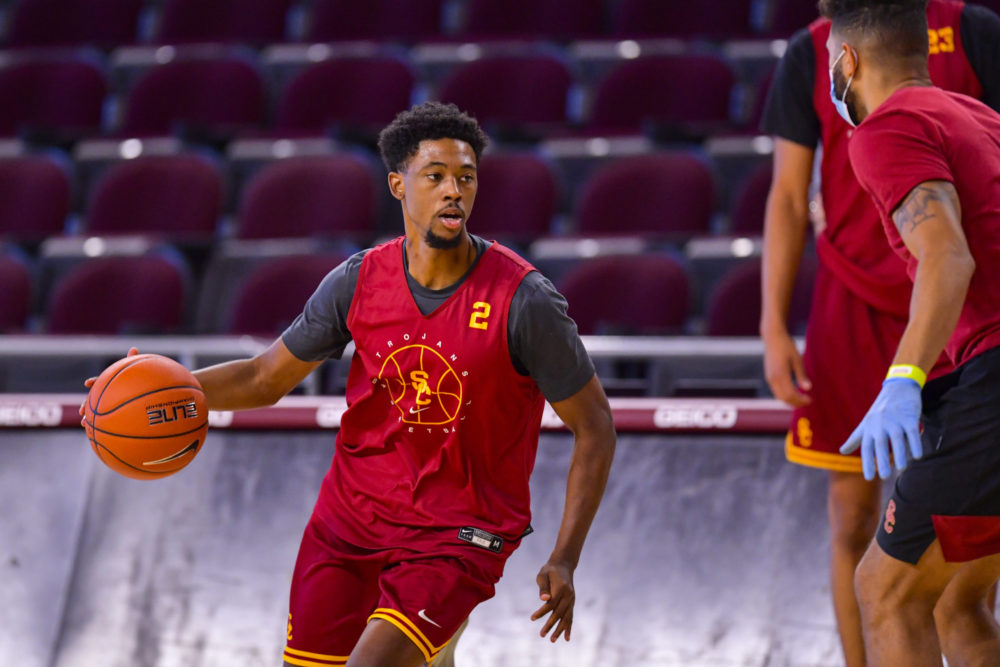 The Trojans  beat Utah on Saturday 64-46 in a game they very much needed to win. In this unusual season the Trojans had little time to prepare for three games this week. They won two, and could have won the Colorado game as well.

The Utah game had three very distinct stages. USC jumped all over the Utes 20-4 in the first seven minutes and in what was easily the best run so far this season. In the second stage of the game the Trojans repeatedly turned the ball over and couldn’t score. USC had 10 turnovers in the first half including 7 steals by Utah and the sloppy play allowed the Utes to dominate the second stage of the game and get easy baskets. The Trojans lost their flow on offense and the Utes came all the way back and took a 27-26 lead. The Trojans closed the half on a mini run to lead 32-28 at the break.

The third phase was dominated by the Trojans. USC can not play better defense than they did in the second half. They limited Utah to 4 made baskets on 30 second half shots. USC only scored 12 points in the first ten minutes of the second half but their defense played so well that the lead was extended and when the Trojans found their offense they easily closed the game out.

The Trojan energy level was very different than it was two days ago in the loss to Colorado. In the early run Isaiah White led the Trojans after Drew Peterson scored the first 5 points. They both had big games, and along with Tahj Eaddy and Chevez Goodwin, they were too much for the Utes.

Utah concentrated on double teaming Evan and Isaiah Mobley whenever they had the ball and that plan worked to a point. The Mobley brothers were very quiet offensively but four Trojan transfers accounted for 54 of the Trojan 64 points.

Isaiah White started again with Ethan Anderson still out with his back injury, and Isaiah was very solid. He played only 20 minutes before fouling out but made 5-7 from the field including 1-2 from three and finished with 16 points and 5 rebounds.

Drew Peterson was also 5-7 and finished with 13 points, including 2-3 from downtown. Drew led the team with 3 offensive and 11 total rebounds. He also 2 assists and 2 blocks.

Tahj Eaddy made 7 of his 16 shots including two from three and led the team with 18 points and 5 assists. He scored most of his points in the second half when the Trojans broke the game open.

Chevez Goodwin also made 5-7 shots and finished with 11 points, 5 rebounds and a block.

For the game Utah made 17-61 shots (27.9%) and 3-22 (13.6%) from three. Coach Andy Enfield said that the defense was outstanding especially in the second half. The Trojans had three games in five days after being off the court for almost three weeks. Enfield said they had only one full practice this week along with walkthroughs before each game.

The Trojans switched on almost all ball screens and the front court players did a very good job on the switches when they were left defending guards outside. Utah looks to two players to provide a lot of their scoring. Isaiah White said the game plan was to keep guard Alfonso Plummer from getting good looks from three and to stop forward Timmy Allen from driving to the rim.

In the first two conference games the Trojans have not been able to capitalize on their size advantage on the offensive end and have not gotten the scoring they will need from the brothers. It can’t be a surprise that opponents are double teaming them when they get the ball inside. They are both good passers but they generally don’t make quick decisions which allows the second defender to help. USC must get the ball inside to Evan; his combination of skills can not be matched by anyone the Trojans will play. There are very few lobs to either Mobley; there weren’t any to Evan in this game. The Trojans cannot count on the rest of the roster to carry them offensively as they did against an overmatched Utah team.

The Utes’ double teams kept Evan and Isaiah from doing anything on the offensive end. The game was won because the other Trojans dominated Utah’s complimentary players. Between the brothers they made one shot from the field; Isaiah scored with 1:59 left in the game. Evan did not have an official shot in the entire game. He didn’t try a shot in the first half and was fouled on his two attempts in the second half. He made 3-6 from the line, all in the second half, and finished with 3 points, 5 rebounds, 3 blocks and 3 turnovers. Enfield said: “Evan is the most unselfish talented player we’ve ever seen. He could have forced shots but he passed (the ball) out and didn’t force things. He’s about winning.  He played great defense on the perimeter against guards.”

Isaiah’s only 2 points were on his late basket. He was 1-3  and 0-1 from downtown and finished with 4 boards, 4 assists and 2 blocks. He also did a good job defending guards on the perimeter on switches.

Several times in the first half Evan seemed slow to get back on defense after a turnover or missed shot, but he played with more energy in the second half. He also demanded the ball a few times late in the game which was encouraging. On one second half Utah possession he was guarding Timmy Allen in the lane about 12 feet from the basket. Allen tried two pump fakes and then rose for his shot which Evan easily blocked.

Isaiah made the highlight play of the game. He was double teamed on the left baseline and made a behind the back bounce pass to an open Chevez who made the easy layin.

The Trojans Had Their Usual Problems

USC shot only 14 free throws, and made 8. When the Mobleys are not attacking inside, the team will not get to the line often enough. The Trojans had 15 turnovers, but only 5 in the second half which was encouraging. Drew, Tahj and both Mobleys had three TO’s apiece.

The Trojans had only 3 offensive rebounds in the first half and gave up 6 to the Utes. They were also outscored in the paint in the first half by 6. They did much better in the second half and for the game outscored the Utes inside 32-26 inside, but the Utes finished with 7 more offensive rebounds. That stat is somewhat misleading since Utah missed 44 shots while the Trojans made 25 of their 47 shots.

He has not gotten the Colorado game completely out of his system. He talked again about the missed shots that the Trojans will usually make.

Ethan Anderson is progressing. They expect him to be closer to playing next week in Arizona. A decision will be made mid week.

Enfield wanted to talk about Paul Westphal. Andy and his wife met with the Westphals when he got the job. Paul was “a wonderful human being and a USC Trojan at heart.  He was a special man.”

WeAreSC Player Of The week.

The Player of the Week for the long delayed week 4 is Tahj Eaddy. To start the week Tahj was tied for with the second most points against Santa Clara with 13. He led the Trojans with 16 points against Colorado making 5-11 from the field including 4-9 from three. He also had 5 assists against only 1 turnover in the loss to the Buffs. In the win over Utah he had a very good second half and led the team in scoring. He also played very well defensively.

Tahj has proven to be a pretty consistent scorer so far. His play raises the question of why his numbers were down at Santa Clara last season from the year before and why he didn’t start the first half of last season. Enfield has to be pleased with Tahj’s overall play.

The Trojans travel to Arizona next week for what will likely be the most difficult two game road trip of the conference season. The 6-2 Trojans (1-1 in Pac 12 play) are in Tucson on Thursday night and in Tempe late Saturday afternoon. The way the conference season has started USC likely needs at least a split to continue in the race for a first round bye in the conference tournament.