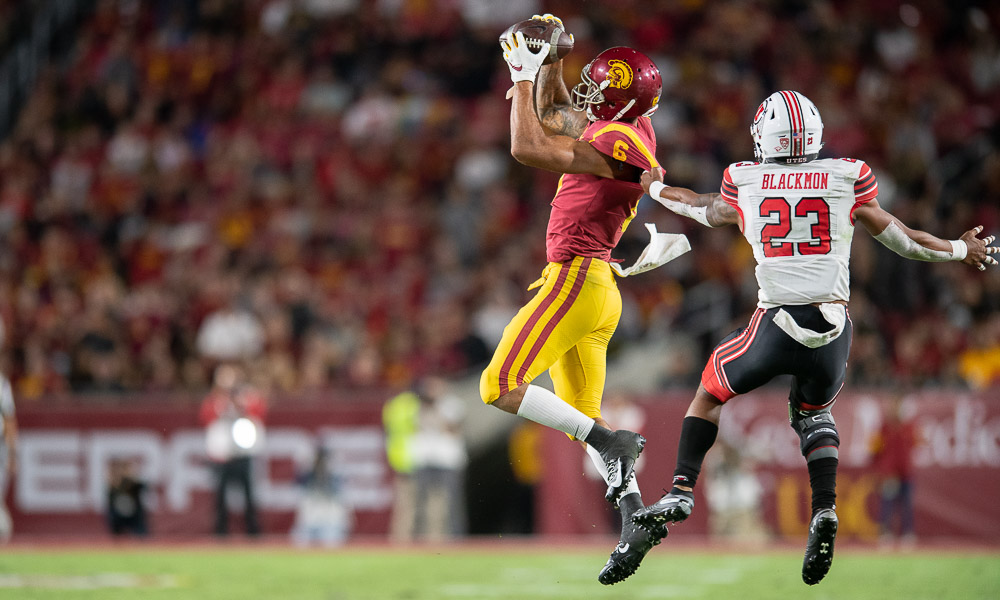 With players reporting back to USC for voluntary on-campus workouts this week, it marks the start of what everybody hopes becomes the 2020 college football season. But before we move forward there, we’ll take another look back at USC’s 2019 season, with the top 10 plays turned in by the Trojans.

Not surprisingly, the plays skew heavily to the offensive side, though the two game-saving defensive plays made the list. Also not surprisingly, true freshmen play a big part in this list. These lists are always up for debate, so if you have any thoughts on plays that didn’t make it or the order in which these appear, feel free to comment on the message board.

The 2019 season wasn’t even 30 minutes old when it went completely off the rails, as starting quarterback JT Daniels suffered a knee injury that would sideline him for the season. USC’s offense sputtered without Daniels, as the Trojans had just two plays of more than eight yards in the second half and Fresno State came back from being down 31-13 to set themselves up with a first-and-10 at the USC 15-yard line with 1:53 left and a chance to tie the game with a touchdown and a two-point conversion.

Fresno State quarterback Jorge Reyna looked like he had his running back on a wheel route for an easy touchdown after USC defenders bit slightly on a fake wide receiver screen. But Pola-Mao came over the top to intercept the pass. It was Pola-Mao’s first-career interception and put to rest any chance of a Fresno State comeback.

Kenan Christon runs around and through Arizona State

True freshman running back Kenan Christon made his mark earlier in the season against Arizona, rushing for two touchdowns in a game where the Trojans lost both Stephen Carr and Markese Stepp to injury. But the game against Arizona State was Christon’s first official start and he responded with 144 all-purpose yards.

He scored two touchdowns against the Sun Devils, including a 58-yard catch-and-run that illustrated every bit of Christon’s abilities as a running back.

The play was all but stopped by the Sun Devils, as the Trojans ran four wide receivers between four and six yards downfield on a 3rd-and-four situation. With Arizona State only rushing three, seven Sun Devils were sitting on the USC receivers and Kedon Slovis had nowhere to go with the ball. Christon used his speed to take his wheel route past his defender and Slovis found him for what should have been around a 20-yard gain. Christon cut inside to make two defenders missed and was wrapped up at the 30-yard line. Except Christon kept running, tearing through the strip attempt by former USC cornerback Jack Jones and then outraced another Arizona State defensive back to the endzone.

The play gave USC a 21-7 lead in the first quarter, in a game where USC would eventually need every single point.

Kedon Slovis made a few nice throws in closing out the Fresno State game the previous week, but there was still plenty to prove against Stanford. Things didn’t look great with the Cardinal shot out to a 17-3 lead early in the second quarter. But that led to the first real glimpse of what Slovis had in store for USC fans the rest of the season.

On a 1st-and-10 play at the Stanford 39-yard line, Slovis dropped back and lofted a deep pass to Amon-Ra St. Brown. The ball dropped perfectly into St. Brown’s arms as two Cardinal defenders converged.

USC scored six touchdowns on its final seven possessions of the game, starting with that one, as the Trojans blew out the Cardinal. And Slovis began writing his name in the USC record book.

According to Pro Football Focus, Tyler Vaughns has made 28 catches within a yard of the sideline since 2017, which is six more than any other receiver in the country.

This wasn’t the game-winning catch-and-run touchdown from Michael Pittman, or the opening score from St. Brown, where he took a handoff and bounced off a defender, but Vaughn’s catch here was the best play in the game.

USC needed a jolt as it trailed by 10 early in the third quarter and couldn’t quite figure Colorado out on either side of the ball, as the Buffalo defense keyed in on true freshman Christon to stifle the USC running game.

Slovis dropped back and delivered an inch-perfect pass to Vaughns, who got to show off his strong hands and terrific body control as he spun against his momentum to make a phenomenal catch, keep himself in bounds and stroll into the endzone. Vaughns has made more than a few terrific grabs along the sideline during his USC career, but this one might have been the best.

Once again, USC found itself down in a game and in need of a spark. Trailing Notre Dame 20-6 late in the third quarter, USC had punted on five of their first seven full possessions of the game.

And for the first of two times on this list, Slovis found St. Brown streaking down the middle of the field and hit him between the safeties with a well-placed ball. St. Brown did the rest, getting one hand on the ball before eventually corralling it fully and taking it into the endzone.

It was the spark the USC offense needed, as the Trojans scored touchdowns on three-straight possessions beginning with that one, and pushed Notre Dame all the way to the end in a 30-27 loss.

True freshman Drake Jackson had a huge year at defensive end for the Trojans, but no play was bigger than his safety against Utah.

With USC clinging to a one-point lead against the Utes midway through the fourth quarter, Jackson beat senior left tackle Darrin Paulo to the inside and broke through the line to put heavy pressure on Utah quarterback Tyler Huntley.

Huntley could do nothing to get out of the way and wound up flinging the ball wildly in what resulted as an intentional grounding penalty in the endzone, for a safety.

The two points gave USC a 23-20 lead and the ball. A subsequent touchdown stretched the lead to 30-20 and USC was able to finish off the win over the No. 10 Utes.

This game won’t be remembered fondly by USC fans, but boy did Slovis put on a show for the game’s first touchdown.

Facing third and five at the Oregon 8-yard line, Slovis bought time scrambling, then bought more time, then more, until he eventually found wide receiver Drake London in the endzone for a touchdown.

Nearly eight seconds elapsed between snap and release, as a handful of the Ducks had a chance to bring him down. Slovis took a few big hits during the season, but this was another example of how well he can operate in the pocket while buying time and keeping his eyes downfield. It was a special play from a special player.

Slovis dropped back into his own endzone late in the first quarter against Arizona State. Eleven seconds later, St. Brown was standing in the opposite endzone.

The 95-yard score gave USC a 28-7 lead in the first quarter against the Sun Devils and was part of a 173-yard receiving day for St. Brown.

The result of the play was big in a five-point USC win, but the play itself was tremendous. Slovis threw the ball 35 yards on a line and split three defensive backs, hitting St. Brown perfectly in stride and the junior wide receiver did the rest, putting distance between himself and the Arizona State defenders before cruising into the endzone.

The third play on this list from the Arizona State win is defensive end Christian Rector’s game-saving interception.

After USC jumped out to a 28-7 lead in the first quarter, the offense stalled. The Trojans scored four-straight touchdowns to open the game and then picked up just one field goal on the next nine possessions.

Rector started the play at defensive tackle, read the quarterback’s eyes and looped to his right along the line of scrimmage. He wound up exactly in the passing lane and got his hands up in time to deflect the ball into the air. That would have been a nice play on its own, but Rector had the presence of mind to find the ball in the air and make a sprawling, diving interception, bringing the ball in just a few inches off the ground and effectively ending the game.

It’s tough to pick between two huge plays from Rector during his time at USC–this one or the forced fumble in overtime against Texas–but the defensive end had a couple big ones during his Trojan career.

Pittman goes up and gets it

Michael Pittman turned in one of the all-time great seasons for a USC wide receiver in 2019, and his game against Utah was a huge part of it. Pittman finished the game with 10 catches for 232 yards and a touchdown, and he authored the biggest play of the game–and the season–five minutes into the third quarter.

USC held a 14-10 lead, but was facing third-and-10 at its own 22-yard line and hadn’t scored since midway through the first quarter.

USC quarterback Matt Fink, in for an injured Slovis, gave Pittman a chance with a deep ball down the sideline.

Pittman split two defenders, found the ball in the air and went up high to bring it in over a Utah safety. The Utah corner initially covering Pittman got his hands on him at the 25-yard line, but Pittman was able to escape and stay ahead of him all the way into the endzone. Pittman had a number of tremendous plays during his USC career, but that’s likely the one that will lead his Trojan-career highlight tape. It was a huge play in a huge situation, in what was easily USC’s biggest win of the 2019 season.