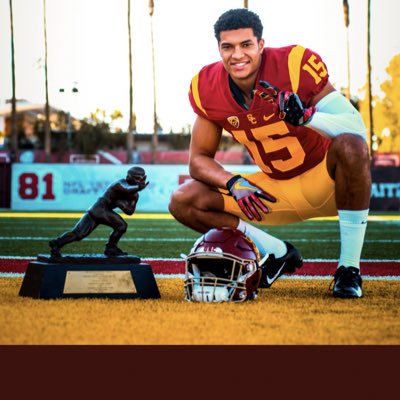 It was a wild week in USC recruiting, and it had almost nothing to do with the current 2020 class.

In the piece of news that is slightly less transfer related, veteran receiver Velus Jones plans to return to USC. The Trojans’ depth at receiver was tested this spring, so getting someone back who can contribute heavily to that rotation, as well as handle kickoff return duties, was a big win for the USC roster.

But on the recruiting side, the 2019 class suddenly looks a lot stronger than the one that limped across the finish line on signing day, having lost standout wide receiver Bru McCoy to a transfer to Texas, as well as missing out on several local standouts.

This is massive news for USC, no two ways about it. These are two players ranked in the top 45 in the country for their class. McCoy finished at No. 9 overall, and Steele was No. 42. It’s also very welcome help to two position groups. While there is talent at wide receiver, Michael Pittman is in his last year of eligibility, while Tyler Vaughns will have the option to leave early. This is a tremendous class of wide receivers now, as McCoy will add to a group that include Kyle Ford, Drake London, and Munir McClain. All four will need to hit the ground running, because even if they aren’t called upon significantly this year, they could see big roles as early as next spring.

Steele added to the defensive back group is an even bigger addition in the immediacy. USC signed a number of defensive backs, as head coach Clay Helton said repeatedly that numbers were a concern in the secondary. But very few of those defensive backs were expected to be able to contribute right away. With Steele in the mix, and potentially able to secure an NCAA waiver allowing him immediate eligibility, the Trojans have their corner capable of stepping in as a true freshman.

These are also big additions from a perception standpoint, as the Trojans went from signing two of the top 20 California prospects in the 2019 class, to now landing three of the top six.

USC received a commitment from tight end Jack Yary last week, but they aren’t done looking at that position. It certainly isn’t mandatory that they get two tight ends in this class after signing two in the 2019 class, but the Trojans will take a shot with five-star prospect Arik Gilbert (Marietta, Ga./Marrieta). And this week, Gilbert released a list of his top ten schools, which includes USC.

The Trojans are considered a long shot here, with the hometown Georgia Bulldogs likely out front, and other schools closer to home chasing closely behind. But these are the kinds of prospects who would routinely put USC in their top 15/10/5 lists, though it feels as if it’s been a while since that’s been the case. We’ll see how far the Trojans can go with Gilbert.

The Trojans have sent out a number of offensive line offers over the past few weeks, and there were a couple more this week, as two Arizona offensive tackles picked them up.

This Sunday could provide a little more clarity on the offensive line recruiting for 2020, as the Trojans host their OL/DL summer camp. Who is in attendance, who the coaches spend time with, and who grabs offers after the camp will shed some light on priorities and where USC coaches might be headed along the line.

Cornerback Jaylin Davies (Santa Ana, Calif./Mater Dei) could have plenty of opportunities this fall to turn himself into a household name in recruiting circles. Following the departures of Elias Ricks and Darion Green-Warren to transfer, Davies will be called upon to lead the Mater Dei secondary as a junior this fall. His recruiting has already taken off, as Alabama, Auburn, Florida State, Michigan, Ohio State, Oklahoma, and Oregon have already offered, in addition to USC.

Davies took an unofficial visit to USC this week, and the Trojans should ultimately be in a strong position to land Davies whenever he is ready to make a commitment.