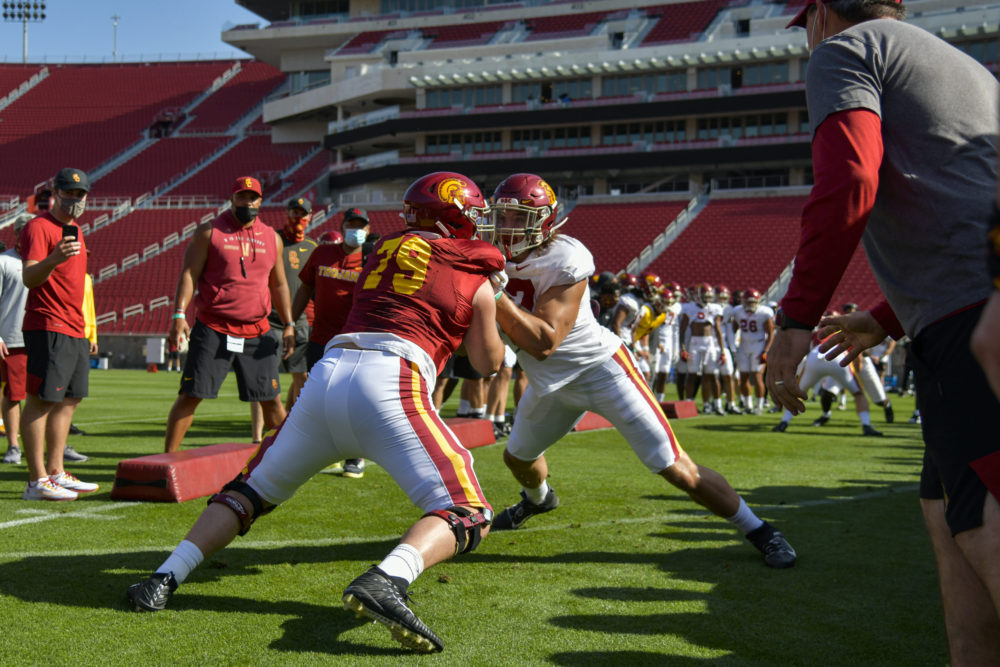 No position group on the USC roster needs to improve more from last year to this year than the offensive line. Between the poor rushing numbers and the high sacks total, it would have been extremely difficult for the Trojans to have continued their undefeated regular season over a full slate of games or against the original lineup of opponents.

It did not come as a huge surprise when the Trojans made a coaching change at the offensive line position, and even less of a surprise that the arrival was someone well-versed in the Air Raid offense, in Clay McGuire.

McGuire didn’t come in with any expectations of changing the USC offense, but there have been a few adjustments he’s made. That started with terminology, as well as adding some of his philosophy and principles. It was well-documented that former offensive line coach Tim Drevno did not have a background in the Air Raid. Some of USC’s returning offensive line starters said the changes with McGuire involved now have been evident.

“He knows the different nuances and ins and outs of some of the different types of techniques and things that you have to do to play o-line in the Air Raid system,” right tackles Jalen McKenzie said. “I think that’s been really helpful with us in terms of IDing things and to play faster within the system and not having to think as much, and to be able to play with tempo like the Air Raid system is supposed to be.”

Center Brett Neilon said there has been a mix of technical changes that have mixed well with McGuire’s personality.

“The way we’re pass setting now is different,” Neilon said. “He preaches a lot of physicality and we’ve been duper in tune with goal line and short yardage and being physical in the run…While he is super experienced with the pass sets and all that, he is really aggressive and wants us to run the ball. I think those two are some big changes.”

Overall, McGuire has been pleased with the progress the line has shown this spring. One thing that has stood out with the offensive line group is how much time they spend doing individual drills during a typical practice. That’s not by accident.

“I’ve been fortunate to get quite a bit of indy (individual) time there at Washington State in that offense and coach Helton gives us quite a bit of indy time here, and I really believe in fundamentals,” McGuire said. “I’m probably a little bit geared more toward fundamental work than walk-through type things.”

McGuire said the players have been building a good foundation and those fundamentals across the board have been improving. Though he did say that could improve “substantially more.”

As far as goals for the spring, with six practices remaining including Tuesday afternoon’s session, McGuire said the focus heading into spring was building on those fundamentals and also identifying that top group of options heading into fall camp. McGuire, head coach Clay Helton and offensive coordinator Graham Harrell said coming into spring ball that USC would mix and flip offensive linemen across the line and up and down the first and second team. That really hasn’t happened yet, save for Andrew Milek moving from the third-team center to the second team, pushing Justin Dedich to left guard with the second team. But moves are likely coming this week.

“I think we’ve done some good things and I like where we’re headed,” McGuire said, adding that while USC is technically nine practices in, some have been helmet-only and one was a spring game prep. “Trying to get a little evaluation in there and kind of see where we’re at a little bit and then we’ve got six practices to make it uncomfortable. “We’re going to flip flop some guys and put guys in positions and kind of reorder that lineup a little bit just to figure out and see who our best five to eight guys are. When we figure that, we’ll go into fall camp and have a really good idea of how we’re going to want to play the season with our guys.”

It’s clear that McGuire wanted to get a really good sense of who he has coming back along the line, as the four returning starters have taken every first-team rep during practices this spring when media has been able to attend. That group has been Courtland Ford at left tackle, Andrew Vorhees at left guard, Brett Neilon at center, Liam Jimmons at right guard and Jalen McKenzie at right tackle. There is another group of players just behind them likely to start pushing once this movement comes. Justin Dedich might be at the top of the list, and he has impressed McGuire so far.

“Dedich, you could argue through camp [has been] one of the toughest, hardest-working players we have out there,” McGuire said, adding that Milek’s play at center has allowed the staff to see more of Dedich at guard.

Jonah Monheim has had a good spring, according to McGuire.

“Jonah’s really talented,” McGuire said, adding that Monheim reminds him of former Washington State tackle Joe Dahl, a fifth-round pick of the Lions in 2016. “I think he’s having a really good camp and he’s really sharp. Not a real vocal guy, but every single day shows up and is extremely consistent and does a really good job out there.”

Second-year tackle Casey Collier has drawn praise from Helton, and McGuire spoke highly of him as well. But it appears a little premature to put him in the discussion to start this season.

“Casey’s a guy that has incredible talent,” McGuire said. “I think a lot of the new terminology and things like that have been hard for him early on, but the last practice he had was the best practice he had. When he knows what he’s doing and when it’s clocking for him, he has incredible ability. When we put it all together for him, he has the ability to be a rare talent. I think that’s coming down the road.”

To this point, Courtland Ford has been the mainstay at left tackle, and it looks like it could take something special from another guy to bump him out of that spot.

“He’s a guy that’s shown up every day,” McGuire said. “He’s got a great attitude. He works really hard. He competes. I think he has a really good skill set…With that approach, he’s done some really good things for us. He looks like he’s going to be a good option for us at the tackle position, as well as a few other guys.”

The USC offensive line will have plenty of pressure on it to perform this season. Keeping Kedon Slovis upright and healthy will be an absolute key to the season, and finding some semblance of a running game appears mandatory if the Trojans are going to win as many games as they believe they can in 2021. But McGuire and the players aren’t feeling that extra pressure at this point.

“I feel like whenever you strap up for the type of program that we’re at, you feel some type of pressure to succeed and pressure to play well,” McKenzie said. “But I think more it’s a pressure on ourselves that we’re putting to be accountable to our teammates…We’re the thing that keeps [the offense] running and when everybody’s looking to somebody, they’re going to look to us.”

Part of any success for the USC offense this year will come from being better in short-yardage situations, both picking up first downs in third-and-short and scoring touchdowns when on the goal line. Those have been key points of focus this spring, which is McGuire said is unusual for this time of year. McGuire said Helton designated a full practice to those situations and has built in some special periods in other practices solely to focus on those areas.

“The focus on it is high,” McGuire said. “Part of that is, one, making sure everybody is on the same page. Understanding where we’re trying to put the ball, the running backs understand where we’re trying to do with it. And then two, it’s a mentality. We can have the greatest scheme in the world, but if we don’t have the right mentality and approach to execute those situations, then it isn’t going to matter. The first thing I did is make sure our mentality is right. We’re going to get that thing no matter what. It doesn’t matter what defense they play. Whatever. Whatever we do is going to be better than what they do and we’re gonna convert the first down. Two, is getting everybody on the same page and making sure we execute our individual jobs at a high level together, and we should be able to. It’s our job to put them in great situations and it’s the players’ jobs to have the right mentality and fundamentals to be able to execute in those situations.”