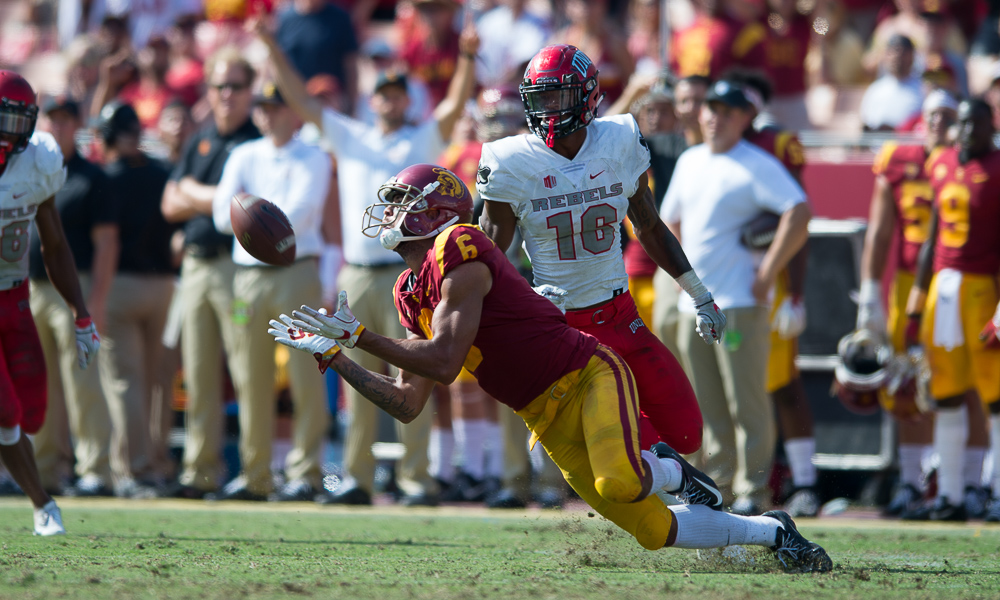 There were positives and negatives for the USC Trojans in terms of the 2020 NFL Draft. On one hand, the Trojans had a first-round selection in offensive tackle Austin Jackson, and a second pick toward the top of the second round, in wide receiver Michael Pittman.

On the other hand, that was it for USC, as the Trojans finished with just two players taken in the draft. It was the smallest output since 2002, when cornerbacks Kris Richard and Chris Cash were selected.

USC coaches will (and should) absolutely celebrate Jackson going No. 18 overall to the Miami Dolphins. It marks two years in a row that USC’s highest-drafted player in an offensive lineman, and Jackson adds his name to a long and distinguished legacy of first-round Trojans along the line.

And Pittman almost snuck into the first round as well, as the 6-foot-4 receiver ran and tested well at the combine, and had scouts raving about his film and work ethic constantly in the lead up to the draft.

But having just two players selected continues a lukewarm trend for USC in the draft, as the Trojans were on a five-year streak of having at least four players taken, but hadn’t produced more than six draft picks in a single year since the 2011 draft. To compare, eight programs had at least seven players drafted this year, including Utah, and led by LSU’s 14 selections.

Over the past four drafts, USC has had 15 players selected by NFL teams, compared to 21 for Utah, and 20 for Washington. This year, Utah, Oregon, Cal, Colorado, Oregon State and UCLA all had more players drafted than the Trojans.

Whether it is a development issue or a retention issue, both could be blamed for the low number of drafted players this year. USC had just five players with a real chance to be drafted this season, and it’s easy to understand why looking back at the recruiting classes that should have made up a bulk of the draft-eligible prospects for the Trojans.

The 2015 class would have been fifth-year seniors this season, but just two players remained on the roster in linebacker John Houston Jr. and defensive end Christian Rector. The USC coaches did a good job in getting a lot of those prospects into the NFL, but that 2015 class was absolutely loaded and finished as a top-two recruiting class in the country. USC turned one of those prospects into a first-round pick (quarterback Sam Darnold), while Alabama, who battled with USC for that top spot, produced three.

In the 2017 class, Joseph Lewis and Levi Jones were dismissed from the team, but could have been third-year players eligible for this draft as well.

It would not be surprising to see USC put together a much better showing in next year’s draft – provided the season and subsequent draft process as normal, or close to normal, as possible – as the Trojans benefitted from several players who could have been taken in this draft but elected to return for at least one more year.

Offensive lineman Alijah Vera-Tucker and defensive tackle Jay Tufele are virtually guaranteed to be drafted next season if they elect to leave early. Wide receiver Tyler Vaughns should be taken, and running backs Vavae Malepeai and Stephen Carr and tight end Daniel Imatorbhebhe will certainly be in the discussion if they can overcome injury issues. It also wouldn’t be a surprise to see big improvement this fall from defensive end Caleb Tremblay and offensive guard Liam Jimmons. And then there are players who could leave after three years, including wide receiver Amon-Ra St. Brown and safety Talanoa Hufanga.