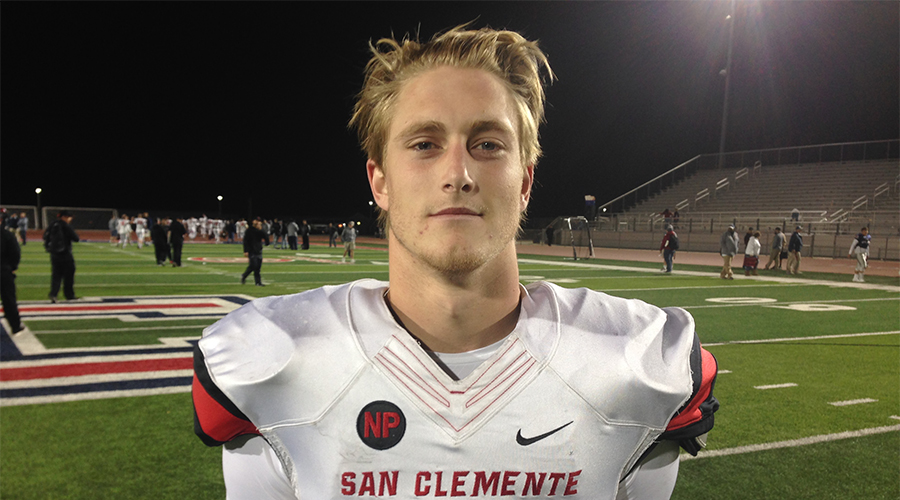 It was certainly an eventful week for Jack Sears.

Fresh off the heels of his decision to flip his verbal pledge from Duke to USC five days earlier, the Class of 2017 quarterback came up with a huge performance this past Friday night, leading his San Clemente (Calif.) team to a 23-19 upset victory over top-seeded and previously unbeaten Romoland (Calif.) Heritage in the quarterfinals of the CIF-SS Division 2 playoffs.

Putting his full array of talents on display, not only was Sears efficient as a passer in the Tritons win, completing 9 of 14 passes for 117 yards and two touchdowns, but he was equally as impressive running with ball, compiling 142 yards on the ground on 13 carries.

In fact, it was Sears’ ability to pick up chunks of yardage with his feet down the stretch that ultimately wound up being the difference in the contest, with his 48-yard gain on a 3rd-and-6 serving as the game clincher with under two minutes remaining.

Despite his obvious outstanding individual effort, Sears was quick to spread the credit around.

“It was a just a great overall team effort,” Sears said. “We stuck by each other, fought for each other, and came out with a great win. We’re just all excited to have the opportunity to get together for a Thanksgiving practice this week. It’s just a great feeling.”

Sears made headlines earlier in the week when word got out that he had decided to become a Trojan. Having originally committed to the Blue Devils over USC and UCLA this past August, the 6-foot-3 passer said that he began to have serious second thoughts a few weeks back following his official visit to Duke.

“I had a great time, but when I came back I kind of had a gut feeling that maybe it wasn’t where I was meant to be,” Sears said. “Then I went to the Oregon game at SC, and I enjoyed my visit. [USC head coach] Clay Helton and [Quarterbacks] Coach Tyson [Helton] have done a great job throughout the recruiting process, and I just felt like it was the place where I was going to grow the most as a person and as a player. I wish nothing but the best for Duke. They’re putting together a great program, and I’m looking forward to cheering them on in the future.”

That relationship Sears maintained with both of the Helton brothers throughout the process wound up playing an especially crucial role in his decision.

“I think what they do is they care for you as a person,” Sears said. “They don’t just talk to you as a recruit, it’s more of a personal relationship. So, each week they would call me, and we’d talk about my team, they’d talk about their team. It wasn’t so much about recruiting as just checking in on each other.”

The Trojans have been on a tear on the field as of late, winning seven consecutive games, including this past weekend’s rivalry matchup with UCLA, and a big contributing factor is the play of redshirt-freshman quarterback Sam Darnold – Sears’ former high school teammate at San Clemente.

Sharing some similarities with Darnold, particularly in terms of their athleticism, Sears has been impressed with the way that Darnold has excelled at USC so early in his career. And with another Trojans quarterback, Max Browne, having recently announced his intentions to transfer to another school, there certainly does appear to be a greater opportunity for early playing time, especially if Darnold opts to depart early for the NFL draft following the 2017 or 2018 season.

“I’ve been around Sam for awhile, from when he was back in high school, so I’m not surprised that he’s doing what he’s doing,” Sears said. “I don’t think anybody is, but seeing how they’ve helped him develop, how well he’s doing in that system…I think we’re very similar players with strengths in different areas, but nonetheless similar, so I think I’ll be able to go in and thrive when he goes off in the next year or two.”

Sears is a mid-year graduate who will enroll at USC this coming January, allowing him to take part in spring practice in March and April.

“I think for a quarterback it’s huge,” Sears said. “You get to go in, you have a whole semester to learn the system and spend time with the coaching staff and the guys you’ll be throwing to for the next couple of years. I’m just ready for that next step in my life, and I can’t wait for it.”

But that’s for the future. When it comes to the here and now there’s just one thing on Sears’ mind – closing his final season at San Clemente off on the right note, with a semifinal clash at home against Valencia (Calif.) this Friday night serving as the next test.

“I’m focused on this team 100 percent, and I’m not thinking about college right now,” Sears said. “I committed, and then I focused in – I wasn’t going to let it be a distraction this week. I’m just focused on these guys. We’ve been fighting together for three years, and we’re going to go and finish this thing out strong.”