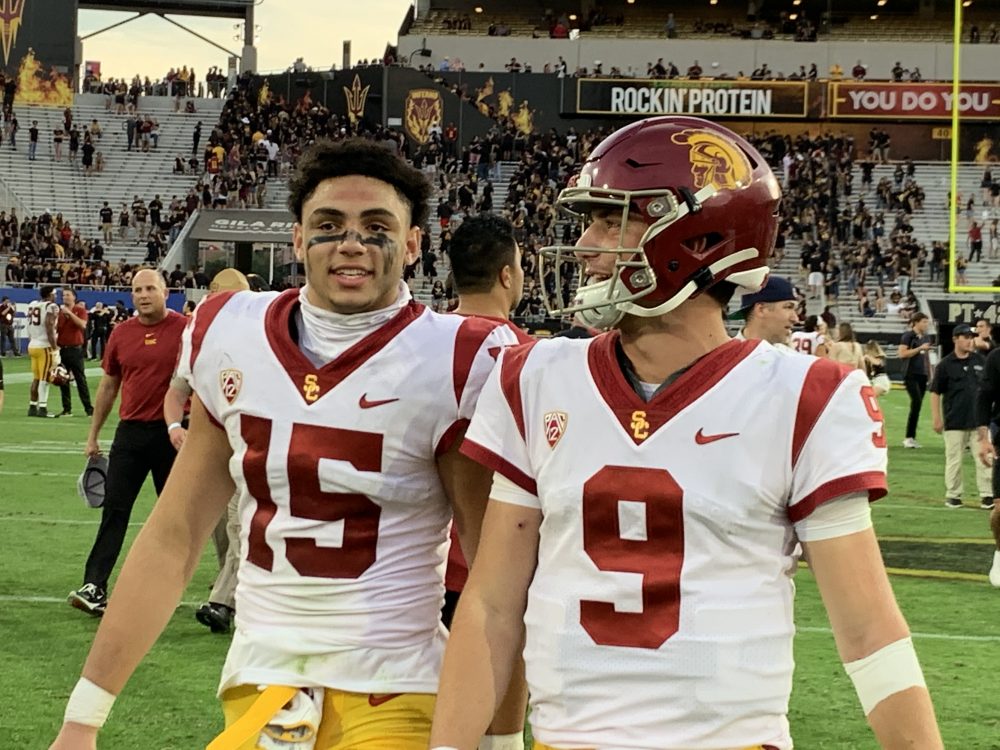 USC’s 2019 recruiting class was the first group in several years that did not finish atop the Pac-12 rankings on signing day. But when it came to production on the field last fall, no conference program got more out of their true freshmen.

Bolstered by quarterback Kedon Slovis, USC’s class of true freshman have been consistently ranked as a top-five group when it comes to on-field production last season. Heading into 2020, that group is expected to take another step forward, with a few of them being looked to as positional leaders. But before that, USC’s video department took a look back at some of their notable plays and contributions last season.

Slovis led the way, posting one of the all-time great seasons for a true freshman quarterback. He was named the Pac-12 Offensive Freshman of the Year, and set a number of school, conference and national records.

His 71.9% completion percentage is an overall USC and Pac-12 record, as well as an NCAA record for a freshman. He set USC freshman season records for completions (282), attempts (392) and passing yards (3,502) and his 30 passing touchdowns were the most for any USC true freshman. He’s already tied for the most 400-yard passing games by a USC quarterback and his 167.6 passing efficiency set a USC record as well.

He was joined on offense by running back Kenan Christon, who was asked to take on more of a load than was expected as veteran running backs ahead of him on the depth chart succumbed to injury. Christon responded by carrying the load in several games, finishing with 373 rushing yards, two touchdowns and a 5.5 yards-per-carry average. He was also a huge threat in the passing game, catching 11 passes for 126 yards and three touchdowns, including a 58-yard catch and run against Arizona State.

Wide receiver Drake London had a huge impact on the offense, as he played well enough that USC offensive coaches worked him in as a fourth receiver as a go-to formation rather than using a tight end in many situations. London finished fourth on the team with 39 receptions for 567 yards and five touchdowns. He became a bigger part of the offense as the season went along, as he caught one touchdown in each of the last five games of the season and posted back-to-back 100-yard receiving performances in the final two games of the regular season.

Munir McClain made a fairly quick impact in a loaded wide receiver group. He had three receptions for 19 yards before sustaining a season-ending knee injury.

Wide receiver Kyle Ford caught just one pass in the four games in which he played, but it went for a 20-yard touchdown. He and Bru McCoy will likely be counted on to lead the wide receiver group in 2021 and beyond.

And offensive tackle Jason Rodriguez flashed some of his potential in four games.

Defensively, the standout was Drake Jackson, who led the team with 5.5 sacks and 11.5 tackles for loss from his defensive end position. He batted down three passes, forced a fumble and recorded a key safety against Utah.

Cornerback Chris Steele was virtually a guarantee to play early in his USC career, as the Trojans were very short on cornerback depth. He got his opportunity and he responded very well for a true freshman. Steele finished with 35 tackles, five pass deflections a fumble recovery, and did well to stay away from penalty flags for the most part, considering how teams went after him.

Fellow cornerback Dorian Hewett was a bit of a surprise contributor, as he was recruited at safety and was a late addition to the class. But Hewett played in 10 games for the Trojans, drawing one start and finishing with 10 tackles and a pass breakup.

Outside of those two, the secondary was full of true freshmen getting a taste of playing time. Safety Briton Allen played in 12 games and recorded five tackles. Safety Kaulana Makaula had six tackles and two pass deflections in four games, including being called upon against Notre Dame. Cornerback Jayden Williams was a special teams contributor, as he finished with six tackles in 12 games. Cornerback Adonis Otey had one tackle in three games. And cornerback Max Williams was held to just four games due to injury, but showed plenty of promise, finishing with six tackle, one sack, one pass deflection and a forced fumble.

Linebacker Ralen Goforth had six tackles in the 12 games he played. Maninoa Tufono saw action in just one game but had two tackles. And defensive tackle De’jon Benton flashed enough to believe he could contribute regularly down the line, as he had three tackles in four games.