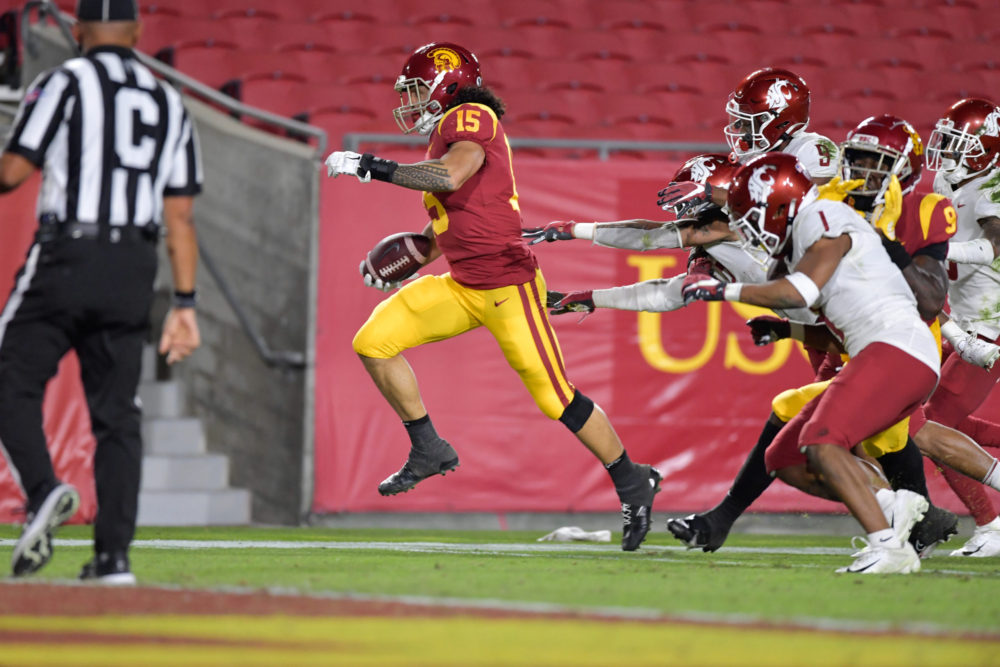 Kedon Slovis’ first pass of the game sailed over the head of running back Vavae Malepeai. By the time Slovis threw another incompletion, it was the second half, USC held a 35-6 lead and the Trojans were coasting to an eventual 38-13 win against the Washington State Cougars on Sunday night.

Slovis eventually completed 18-straight passes and tied a USC record by throwing for five touchdowns in a half, and he wasn’t the only record-setter for the Trojans’ offense. Wide receiver Amon-Ra St. Brown was on the other end of four of those passes — all in the first quarter — as he became just the seventh player ever to score four touchdowns in one quarter. He’s also just the second to do it on four receptions.

Slovis finished the game with 287 yards on 25-of-32 passing and those five touchdowns, St. Brown had seven receptions for 65 yards and four touchdowns and Drake London added 92 yards on five receptions as the Trojans absolutely blitzed the Cougars over the first 23 minutes of the game — taking a 35-0 lead with 7:11 remaining in the first half.

For some reason, Washington State came out defensively with a lot of man coverage against the USC wide receivers and the athletes the Trojans have out wide and behind center were only too happy to take advantage.

St. Brown said this was the first time in a while that they saw a lot of man coverage and his thoughts on it were pretty straightforward.

“As receivers we love one-on-one’s,” St. Brown said. “I feel like this is the first time as receivers we were getting more man coverage looks early on in the game. First two games, we went against a lot of zone, and couldn’t play man.”

The offense was helped by two big turnovers from the defense, as Talanoa Hufanga authored a highlight-reel play when he tipped a pass in the air, corralled the interception and then hurdled a tackler on his way to a 37-yard return. USC cornerback Olaijah Griffin intercepted the very next pass from Washington State quarterback Jayden de Laura. The Trojans turned both turnovers into touchdowns.

“Once again I thought they led the way right from the start,” Helton said of that side of the ball, adding that they talked about trying to make the Cougars one-dimensional and that was about taking away the running game.

Washington State finished with just 73 rushing yards and tailback Deon McIntosh, who came in averaging 119 yards per game, was held to just 65.

Hufanga led the way with nine tackles, an interception and a sack, as he played a linebacker/safety hybrid position against Washington State. The Trojans were without linebackers Palaie Gaoteote and Ralen Goforth due to injury, so USC employed five safeties (Hufanga, Isaiah Pola-Mao, Chase Williams, Greg Johnson and Max Williams) for most of the game.

Helton called Hufanga one of the smartest players he’s ever coached and a “complete player and such a great playmaker.”

“What a special play,” Helton said. “When he hurdled the guy I said oh my goodness. We’ve taken it to another level now.”

USC also got a big performance from defensive lineman Nick Figueroa, who finished with three sacks.

It’s odd that a massive blowout win can reveal more questions than answers, but that might be the case with this game.

USC played without offensive linemen Andrew Vorhees, Justin Dedich and Liam Douglass due to Covid protocols and that created a major hole at left tackle, where Vorhees has started all season and Dedich and Douglass would likely have been the top backups. In their place, true freshman Courtland Ford started the game and played throughout. USC also lost starting guard Liam Jimmons during the first half. He was replaced by true freshman Jonah Monheim.

USC had so much success throwing the ball early in the game that the run game was a comfortable afterthought. But it never showed up for the Trojans, who rushed for just five (Yes. Five.) total yards against a Washington State defense that had not been great in any aspect this season. No USC player carried the ball more than five times and Kenan Christon led the Trojans with just 11 rushing yards.

This is now the second game in a row that USC has been kept out of the endzone in the second half, and the Trojans have not scored a third-quarter touchdown in any of their four games this season. In fact, over the final 45 minutes of gameplay Sunday night, USC was outscored 13-10. The Trojans were held to just 66 total yards in the second half and Slovis was battered by Washington State defenders.

The Cougars finished with three sacks and knocked Slovis from the game for several plays.

“I wish we could have run it better in the second half. But with a 7-8-man front we were looking at, cover-1 cover-3 and some zone pressure they really challenged us early. We have not seen that much. I thought the guys hit on all cylinders,” Helton said. “I look forward to watching the film in the second half where I thought we could have run it better, especially towards the end. But again, you win by 16 last week, you win by 25 this week; the offense is really starting to click. Want to be able to have that run game go along with it and take some pressure off Kedon (Slovis). I know it will One thing I’ll credit Graham (Harrell) with is he loves taking what the defense gives you and so we took advantage of it early. I wish we could have taken a little more advantage of the run game.”

Ultimately, USC did get an opportunity to see a lot of new faces in this game thanks to the fast start. True freshman Casey Collier got in along the offensive line late, and the Trojans were able to lessen the snap counts for front-seven defenders Marlon Tuipulotu and Drake Jackson. True freshman defensive lineman Kobe Pepe played a lot up front.

USC now must regroup because the rivalry game against UCLA is up next for a USC team that could clinch the Pac-12 South with a win. The Bruins have won three of their past four games. It could be an interesting finish to the season for the Trojans, as this Sunday game will be followed by a Saturday contest. And if all goes well there, the conference championship game will take place that following Friday.

Kedon Slovis is the fourth USC quarterback to throw for five touchdowns in one half. Mark Sanchez did it once (2008 WSU), Cody Kessler did it twice (2014 Colorado, Notre Dame) and Matt Barkley did it three times (2010 Hawaii, California and 2012 Colorado).

USC’s five rushing yards are the fewest since the Trojans had -5 against Texas in 2018.