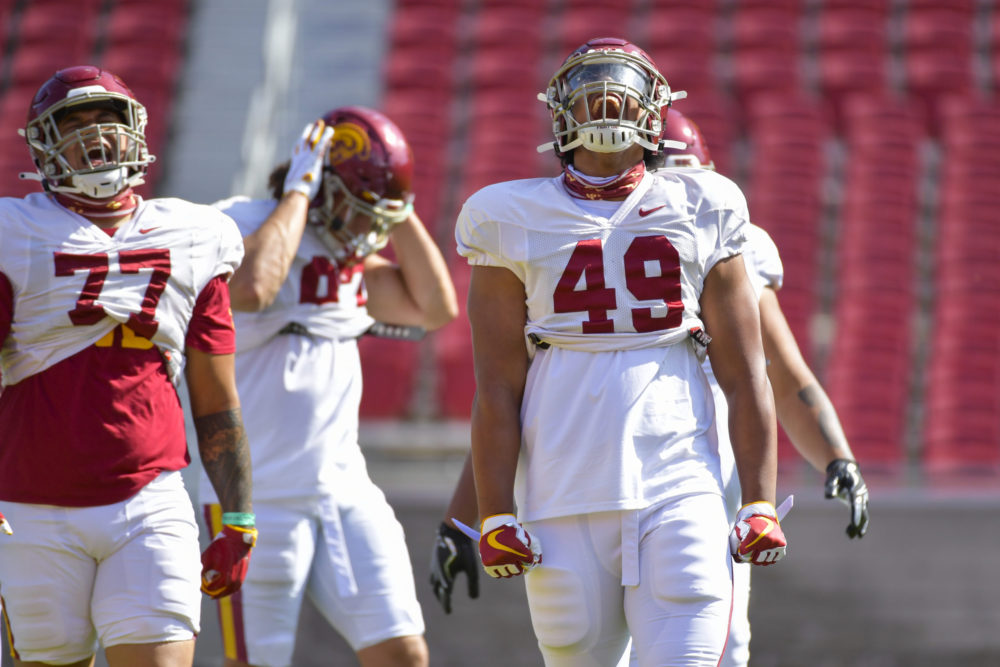 Midway through one of USC defensive line coach Vic So’oto’s answers to a question posed during his media availability on Thursday morning, he paused and tossed a question of his own over to sophomore defensive lineman Tuli Tuipulotu.

“Tuli,” So’oto said. “What your job on the defensive line?”

Tuipulotu leaned forward, unmuted himself, and instinctively rattled off 21 words that gave a pretty profound look into what So’oto is looking to establish in his USC defensive linemen.

“To establish the violent, physical nature of football through relentless effort,” Tuipulotu said. “Both immovable and unstoppable, we do not chase. We hunt.”

It’s all part of the plan to establish a culture this spring, as the USC defensive coaches specifically are looking to imprint themselves and their attitudes on their various position units. So’oto said that without spring ball last season, the coaches and players missed an opportunity to really get to know and understand each other — both the expectations from the coach and the inner workings of the player. With last year firmly behind them, this spring is giving So’oto and his group a second opportunity to establish exactly what is expected of the guys up front.

“We get out there to go hunt and I’m looking for guys that are hungry,” So’oto said. “At the end of the day, the culture of being the right type of Trojan, the culture of leaving the field knowing that the guy across from you feels way worse than you do, is what we’re doing now.”

It’s a goal that is still in its early stages, as according to So’oto, the USC defense has only had two practices while the team has had four.

“We’ve had two tackle, full-padded practices,” So’oto said. “On the defensive side, we count that as actual practice. We play in shorts. We play in upper shoulder pads. But really when you’re grading people and you’re grading players, it matters when you can tackle. So we’re learning a lot about the guys in our room.”

Part of the reason So’oto is learning a lot is because he’s asking the group to do a lot. During Tuesday’s practice at the Coliseum, defensive linemen such as Tuipulotu and Jamar Sekona were asked to drop into coverage and certain plays. So’oto said it’s all about getting a sense for who can perform what tasks along the line.

So’oto has been working with a defensive front at a bit less than full strength this spring, as defensive end Nick Figueroa is out until mid-summer while recovering from offseason shoulder surgery, and outside linebacker Drake Jackson has been unavailable over the first four practices, but should be full-go by the end of the week.

Those two will absolutely have a say in what the USC defensive front looks like this fall, but getting the rest of the group an opportunity early on to establish themselves should be a great thing for the defense overall. So’oto said he would love to have a full two-deep that rotates constantly, but he’s not worried if a player positions themselves as someone who can stay on the field for the entire game and play at a high level.

So’oto is consistent when he talks about where players can improve, as he wants consistent production and effort from all of his players. But he’s also looking for the returning players to reach another level of understanding as to their role in the defense. Tuipulotu said dropping into coverage this spring is more natural to him than last year because he has a more complete knowledge of what the coverage his and his responsibility as it fits into the entire scheme. That comfort of doing your job within the play is what can take players like Drake Jackson and incoming freshman Korey Foreman to the next level.

So’oto was asked about where Jackson could take his game this season.

“We hope that he can produce consistently, get to know our defense better, get to know our coaches better,” So’oto said. “But then you want to see him obviously take a jump to where he understands defense. He understands why we’re calling different things and it’s not about his job anymore. It’s about what am I seeing in front of me and how can I make an impact within my role?

“A lot of what we’re done in the offseason with Drake is helping him understand the situations he’s going to be in and how to be productive.”

The situation with Jackson and Foreman could be similar this season, as huge expectations are going to be placed on both to make significant impacts.

“On defense, the best thing about it is you can go out and make plays,” So’oto said of his advice to both players. “You don’t have to hope an o-line blocks and hope a quarterback sees you to get the ball. You go out there and hunt and do it the right way, then you can get your job done and achieve the dreams that you came here to achieve.”

As far as positions, Jackson is listed on the roster as an outside linebacker and Foreman was announced as a defense end. But as far as So’oto is concerned, it sounds as though every position designation might as well be thrown out the window.