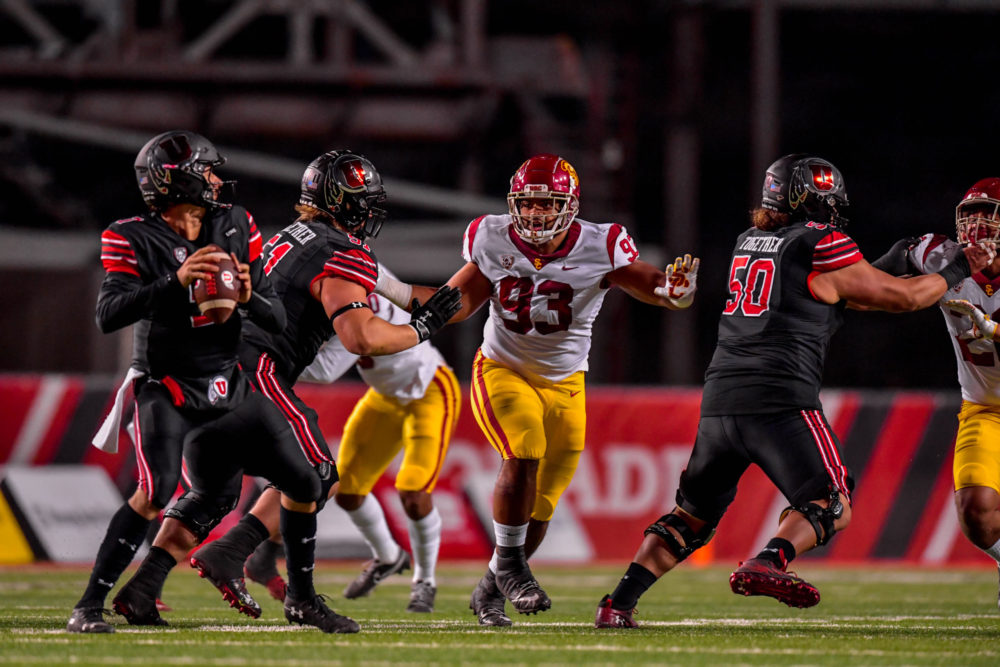 USC entered the 2020 season with a massive Jay Tufele-shaped hole in the middle of its defensive line and more than a few questions about how the Trojans would fill it. It took only a handful of plays for Marlon Tuipulotu to start answering those questions, and now three games into the season, the combination of Tuipulotu, younger brother Tuli Tuipulotu and Nick Figueroa has stepped up in the absence of Tufele and helped pace the USC defense.

Defensive line coach Vic So’oto said the loss of Tufele never entered the equation as he prepared his group for the season.

“I wasn’t here when he was here, so all I know are my guys,” So’oto said. “I hear a lot about this guy that’s not here. I want to hear more about the guys that are here. I want to see who steps up. Again, it comes back to opportunity. As your role increases, your opportunities increase. If your production doesn’t increase too, then something is wrong. I think Marlon has stepped up, Nick has stepped up, Tuli has stepped up and kind of formed their own identity of what we want our D line to be.”

The older Tuipulotu ranks third on the team with 20 tackles and has already matched last year’s sack total with two through three games. He’s also forced a fumble and leads the team with 3.5 tackles for loss.

So’oto said he wasn’t here last year, so he couldn’t get into all the specifics of the differences in what Tuipulotu was asked to do last year compared to what he’s doing this year. But So’oto explained Tuipulotu’s success this season in fairly simple terms.

“He’s being asked to be violent and run,” So’oto said. “To Marlon’s credit, he’s just gone all in. he hasn’t looked back and he’s taken the coaching, the hard coaching during the week and he’s always asking for more, always asking to get better. I do know he’s playing with more anger about him and it’s a quiet confidence that goes through the whole team.”

So’oto said he’s watched some film with Tuipulotu of the 2019 season and showed him how many plays were left out on the field that could have been made. That number is shrinking, but So’oto said they both know there are still some that have been left out there this season as well. What has impressed So’oto the most about Tuipulotu since arriving at USC is the defensive lineman’s love of the game and his desire to ask specific questions.

“A guy that’s constantly hungry for knowledge of defensive line play,” So’oto said of Tuipulotu. “What can I do better? That was something that took me by surprise at the beginning. And now his technique and fundamentals and understanding who he’s going up against and how they’re going to block him, I think is what’s attributed to his success on the field. And really all his work he’s put in in practice it’s starting to show.”

But he’s not the only Tuipulotu putting in work during practice. True freshman Tuli Tuipulotu got some action in the season opener against Arizona State and he’s come on strong in the following two games. He has eight tackles, including six solo, and registered the first sack of his career in the win against Utah. So’oto said he didn’t know much about Tuli when he first got to USC, but one thing has been evident.

“He just runs,” So’oto said. “I think everywhere he goes, he goes as hard as he can go…So my job is just to point him in the right direction and keep that fire burning.”

So’oto said the two have been in sync while playing together, but the brother dynamic doesn’t always manifest itself.

“Marlon’s not that type of guy, the showboaty, punk your brother kind of guy,” So’oto said. “He’s kind of quiet. But Tuli kind of has the little younger brother, want to show up everybody type attitude. There isn’t really a dynamic. It’s more like, we’re here for a job and let’s go get it done.”

Getting it done has come with a major assist from Figueroa this season, who has blossomed under So’oto and in this defensive system. He has 12 tackles, including three for loss, and half a sack through three games. He finished last season with nine tackles in 13 games.

“He’s another guy that just does his job,” So’oto said. “Nick has been one that studies film, loves film, goes really really hard in practice and is making the most of his opportunities. He’s doing what he’s supposed to do within the defense and when plays come to him, he’s just making them…Nick is probably the most sure player we have in our group. I could tell him to go out there and play any position and he’d get it done.”

USC could get defensive lineman Caleb Tremblay back for Sunday’s game after he missed the past two with stingers. That will give the Trojans another body up front, but So’oto has been comfortable with a tight rotation and relying heavily on those three who started the Utah game.

“Again it comes down to practice,” So’oto said. “If they weren’t practicing well, they’re not going to play. It’s really up front, black and white with me. If you want to play, then show up on Tuesday when we’re going full speed and it’s inside run. Show up on Wednesday when we do inside run. Show up on Thursday when we do inside run. That builds confidence in our group and also competition. Take Tuli for example, he’s been playing really really well in practice and it’s slowly gotten more and more opportunities and we see what he does on Saturdays. It just comes down to practice. I don’t have a play count or this guy has to play. I think everyone in the room understands if you want to play, then play all the time. Not just on Saturdays.”

While this Todd Orlando defense has been characterized as one that lets cornerbacks play a lot of man coverage, safeties perform a variety of roles and linebackers blitz a ton, So’oto sees opportunities for his group as well.

“As a defensive lineman, there are no decoys,” So’oto said of what he’s told Figueroa about this defense. “You’re not just going out of the way just to get out of the way of the blitz. Because of coach Orlando’s style and the type of defense we play, every one of us has the opportunity every play to go get the quarterback. He knows that in our room, we’ve had a bunch of pressures and to me, those are just missed sacks. And so we have all this opportunity of all of us hitting the quarterback and it’s like we’re getting there but we’re getting there a step late, or we’re getting there but the ball’s getting off.”

Washington State will bring a true freshman quarterback to the Coliseum on Sunday, but the Cougars’ Run-N-Shoot offense under new head coach Nick Rolovich has found some success this season with both the running and passing games. Despite the youth at quarterback, it’s a fairly veteran offense that will test the Trojans this weekend, especially as USC deals with some practice-field logistical issues related to players currently being held out for covid-related reasons. But on Sunday, the expectation is that this group of linemen will once again be asked to set the tone up front for the USC defense.

“Everybody on our defense, all 11, they’re going to be asked to make a play at some point.The best defenses just make those plays, and the splash plays become routine plays. That’s when a really, really good defense is out there flying around.”